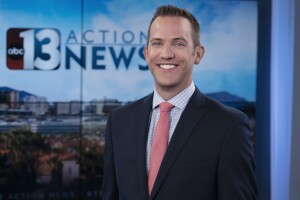 Justin Bruce, an Emmy award-winning meteorologist, joined the 13 Action News team in January 2017 and can be seen weekdays on Good Morning Las Vegas and 13 Action News Live at Midday. Before coming to Southern Nevada he worked at the ABC affiliate in Nashville, Tennessee for 12 years.

Bruce earned his Bachelor of Science degree in Meteorology from Penn State University in 2003. His interest in the weather was sparked by growing up with hurricanes in Louisiana and blizzards in Pennsylvania. After tracking tornadoes for over a decade in the South, he enjoys the challenge of forecasting intense desert heat, strong winds, and severe monsoon storms.

Away from work, Justin spends most of his time at the playground or the pool with his wife (a proud UNLV graduate) and two sons. He enjoys cooking, music, mountain biking, and snow skiing.