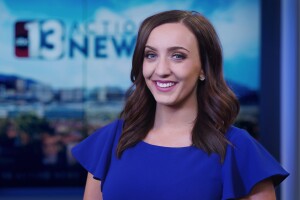 Kelsey joined KTNV 13 Action News in May of 2019. She is thrilled to be back in her hometown of Las Vegas telling the stories of a community she knows and loves.

After graduating with her degree in journalism and media studies from UNLV, Kelsey started her career in broadcast journalism in Boise, Idaho as a multimedia journalist in 2014. During her time in the "City of Trees", she covered politics, wildfires, and the infamous federal land protest at Oregon’s Malheur National Wildlife Refuge.

In 2017, Kelsey joined the team at KSBY News in San Luis Obispo, California as weekend anchor, multimedia journalist, and weather anchor. She reported on the fire lines of the second largest wildfire in California state history and the devastating mudslides that killed 21 people and injured hundreds in Montecito.

During her free time, Kelsey spends time with family and friends and explores the outdoors.