Copyright 2018 Scripps Media, Inc. All rights reserved. This material may not be published, broadcast, rewritten, or redistributed.
Southern Nevada Health District
<p>Mold in a restroom at Warren Elementary School</p>

Clark County Schools anticipate more than a half-billion dollar’s worth of urgent repairs. But children are literally falling through the cracks as some lower-priority improvements are forced to wait.

In recent years, the Southern Nevada Health District has documented everything from drinking fountains laced with bird droppings to battered playgrounds.

Sometimes issues took more than a year to repair. Rhodes Elementary was cited in January 2016 and May 2017 and had construction cones in playground holes for six months. The Health District stated that there was an inadequate attempt to repair playground surfacing. It was finally corrected late last year.

In some cases, problems still exist. At Stanford Elementary School, for example, the principal estimates almost 200 children this year have hurt themselves because of its often-cited but currently unrepaired playground.

What can – and should – the school district do with these types of repairs?

Darcy Spears will dive deeper into these school health and safety hazards at 6 pm today and at 6 am Friday on Channel 13.

CCSD says it’s balancing efforts as it works to “modernize schools, build replacement schools, provide classroom additions and add new schools for Southern Nevada’s growing population,” according to a district statement. It’s strategy is tied to the district’s Capital Improvement Plan, which includes the opening of several new schools and a mix of renovations on sports fields to performing arts centers and technology upgrades, among other things.

But there’s notably less money for repairs, so the district must be strategic. In 2015, a projects list stated 142 Las Vegas schools would need more than $555 million in urgent repairs in the coming years.

“There are situations in which multiple sites require similar work and it is more efficient and effective to contract the work,” the district stated.

That applies to asphalt repairs, the district stated. As a result, removal and replacement at multiple schools will begin this summer, according to the district (CCSD’s full statement is below).

However, in Stanford’s case, it took a group of fourth-graders collecting signatures and writing letters to the board of trustees to get them a promise new blacktop at the beginning of the next school year. 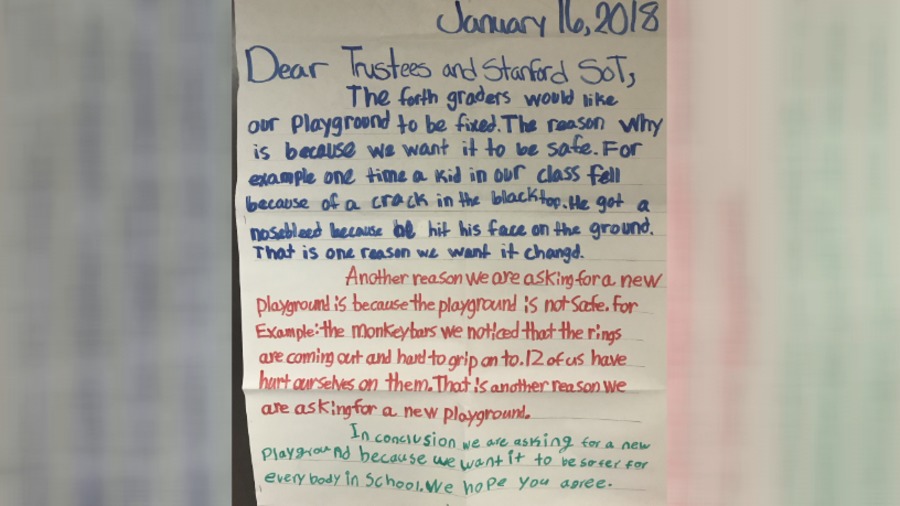 “It shouldn't have taken that,” said Stanford parent Amy Stankosky. “It should have been handled well before and you could've seen that it needed to happen by just looking at the property.”

It isn’t just children who get hurt, either. Principal Merritt has twisted his ankle twice, a teacher tripped and broke his pinky and got a black eye, and the custodian has fallen three times.

VIDEO: A Student's Perspective of the Stanford Elementary Playground - watch in the media player at the top of this page

"(She) has come out of there with her cart and hit the raised edge (where the asphalt changes to a play surface) and gone over the top of her cart,” Merritt said.

The district points out that no way to quantify first aid needs specific to injuries sustained on the playground. Also, the district works with the school to make immediate, short-term fixes when possible.

The Southern Nevada Health District inspects every school property about twice a year. Looking at two years’ worth of records, Stanford's hazards are documented time and again, as are dangerous surfaces at playgrounds throughout the district.

Other hazards the Health District documented included mold at a pair of junior highs, where staff and students were getting sick. Water-stained ceiling tiles documented in inspections are often still there five months later.

High schools have their fair share of health hazards too.  There were reports citing locker rooms infested with roaches. Rat droppings and nests were found in the football concession stand at one school and in the bioscience storage room at another.

The Health District lists some schools as compliant even though in some cases the same violations persist.

In a statement, the Health District said it requires action right away on issues that have the potential to cause an immediate injury, like damaged playground equipment that could cause a severe injury.

But violations that don’t pose an “immediate threat to the health and safety of the students” are expected to be corrected by CCSD without follow-up from the Health District.  These include cracks in the playground surfacing that are not under play equipment and water fountains that may not function or function improperly, according to the Health District.

It’s “not uncommon” considering the size of the schools for the same violations to appear on consecutive inspections in different areas of the schools, according to the Health District.

In the case of Stanford’s blacktop, the Health District considers the surfacing “in disrepair” but that “this condition does not constitute a substantial safety hazard.”

CCSD staff work closely with the Southern Nevada Health District (SNHD) when issues are identified. Issues that cannot be immediately resolved by the site are documented with a work request. All work requests are prioritized for completion based on their severity. Life safety issues have the highest priority. Repairs are also scheduled in a manner that minimizes disruption to classroom instruction while ensuring a safe environment for students and staff.

There are situations in which multiple sites require similar work and it is more efficient and effective to contract the work.   For example, CCSD conducted asphalt assessments and identified a number of schools where asphalt surfaces have major cracking and present possible safety hazards for students. The removal and replacement of asphalt surfaces at these schools will begin this summer, when school is not in session, because the safety of students is CCSD’s number one priority.

The Southern Nevada Health District conducts school inspections using a system that classifies specific violations into risk categories based upon the potential for injury or public health threat to the students.  Each school is inspected twice per school year.

When SNHD staff members come across issues that pose an imminent threat to the health or safety of the students, SNHD staff members require immediate correction of the violation, including exclusion of any affected area or equipment.  SNHD staff members work closely with CCSD staff to ensure removal of the hazard.  Examples of these types of violations would be damages to playground equipment that would result in impalement, significant laceration or other severe injury to students.

SNHD staff members ensure that the hazard is inaccessible to the students and will follow-up to ensure that appropriate corrections are completed.  Other violations that do not pose an immediate threat may be noted on inspection reports.  These violations do not pose an immediate threat to the health and safety of the students,  and are expected to be corrected by CCSD without follow-up from SNHD.  Examples of this type of violation would include cracks in the playground surfacing that are not under play equipment, water fountains that may not function or function improperly, or a small number of lavatories that do not run for the required 20 seconds.

Considering the size of schools, it is not uncommon for the same violation to appear on consecutive inspections in different areas of the schools.