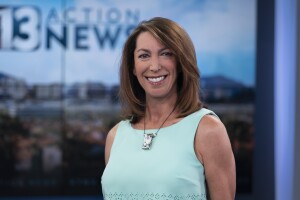 Chief Investigative Reporter Darcy Spears has won multiple Emmys, Edward R. Murrow awards, Genesis awards and Associated Press awards on both a national and local scale for her unparalleled journalism. Darcy was most recently honored with a 2018 Emmy in the Human Interest category for a story called "The Missing Piece" about an autistic boy who was able to connect with something for the first time through the Vegas Golden Knights. That brings her career Emmy total to 18.

In past years, some of Darcy's other awards include an Associated Press Mark Twain award for her ongoing "HOA Hall of Shame" coverage and a National Press Club honorable mention for her series on animal trapping. Other Emmys she's won were for reports entitled "Foster Care Nightmare" about a family ripped apart by the Clark County Foster Care System; for her series of "You Paid For It" investigations into school spending; for her investigation into allegations of deceptive trade practices at the auto repair chain Tire Works; for her story on fire guards who were paid to watch portable school classrooms in case they caught on fire; and for an emotional story chronicling how the death of 58-year-old Jimmy Comito showcased the failure of our valley's medical system to provide critical care.

She's been investigating Las Vegas for 24 years and her stories have changed lives, laws and taught lessons to those who would do wrong. Her recent focus on Nevada's Guardianship system resulted in the state Supreme Court creating a review panel to initiate a state-wide overhaul of a corrupt court process that victimizes the very vulnerable people it's supposed to protect. Her coverage changed state law and served as the basis for a national report on HBO's "Last Week Tonight" with John Oliver. You can catch Darcy every Wednesday night at 11 p.m. with Dirty Dining ; a viewer favorite exposing restaurant health inspections. In addition to her weekly segment, Darcy's investigative work has protected taxpayers, exposed government malfeasance, shined a spotlight on daycare dangers, air pollution, animal welfare, veterans health care and medical malpractice. She even got the El Rancho torn down, a Las Vegas landmark-turned-eyesore that was secretly being used as a front for a world-wide investment scam right under the noses of county regulators.

Darcy has wanted to be a journalist since childhood. She attended the University of California, Berkeley where she received a B.A. in Mass Communications and Northwestern University's Medill School of Journalism, where she earned her Masters Degree in Broadcast Journalism. She hails from Los Angeles, CA and worked at CBS in Chicago before relocating to Las Vegas.