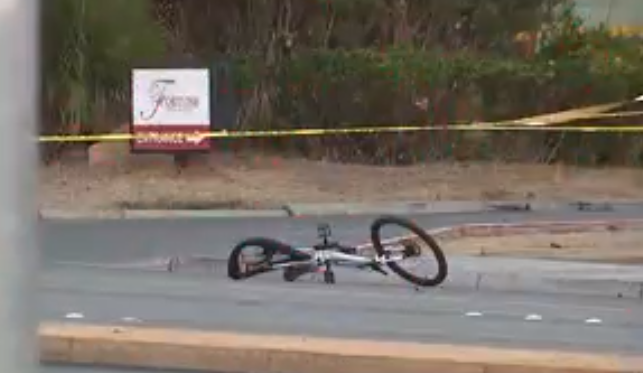 Officers believe they have located Antwon Perkins, a wanted kidnapping suspect, in a home near Simmons Street and Lone Mountain Road. Police are treating the incident as a barricade situation. Viewers have informed 13 Action news of a heavy police presence in the area during this active scene.

We are at Simmons and Lone Mountain. Police are keeping us pretty far back from area where kidnapping suspect Antwon Perkins is believed to be barricaded inside residence. @KTNV pic.twitter.com/dwwEFuMWJi

2:28 P.M.
Police are on scene of a fatal hit-and-run near Flamingo and Tuscany Casino Drive. It is unknown if it was someone walking or someone on a bicycle who was killed. The car was located in the Silver Sevens hotel-casino's parking lot. The driver ran away but was later arrested. Road closures are in effect in the area.

⚠️ TRAFFIC ALERT 🚨 Flamingo Rd is closed from Paradise to Koval due to a hit and run fatal collision. Expect delays in the area.
The suspect fled the scene on foot, and currently outstanding. A photo of the suspect is shown. pic.twitter.com/bo6ztxiQsU

2:05 P.M.
Las Vegas police report a group of six juveniles were in a fight at Western High School, with four of them detained and two transported to local hospitals with injuries. Multiple people were watching the brawl, according to police. No further immediate information was released.

12:30 P.M.
North Las Vegas say they are investigating a home invasion near Carey and Belmont. No major injuries reported at this time. They are asking residents to avoid the area.

8:51 A.M.
McCarran International Airport says a passenger went under the rope in the security area to meet up with another passenger. Law enforcement had eyes on the man at all times before stopping him. They questioned him and brought him back to security to be properly screened before he was allowed to proceed to the boarding area for his flight.

8:11 A.M.
Police say a man was shot multiple times near Chevy Chase Avenue and Newport Street (East Owens Avenue and North Pecos Road). No arrest at this time and no suspect info. Police say the victim is a black male in his 20s. Police activity not impacting travel on major streets in the area. Homicide detectives en route.