We're closing in on four months without a paycheck or unemployment payments for lots of people in the valley. DETR is facing a court hearing on July 7 in response to a lawsuit that's asking the state to make its payments. 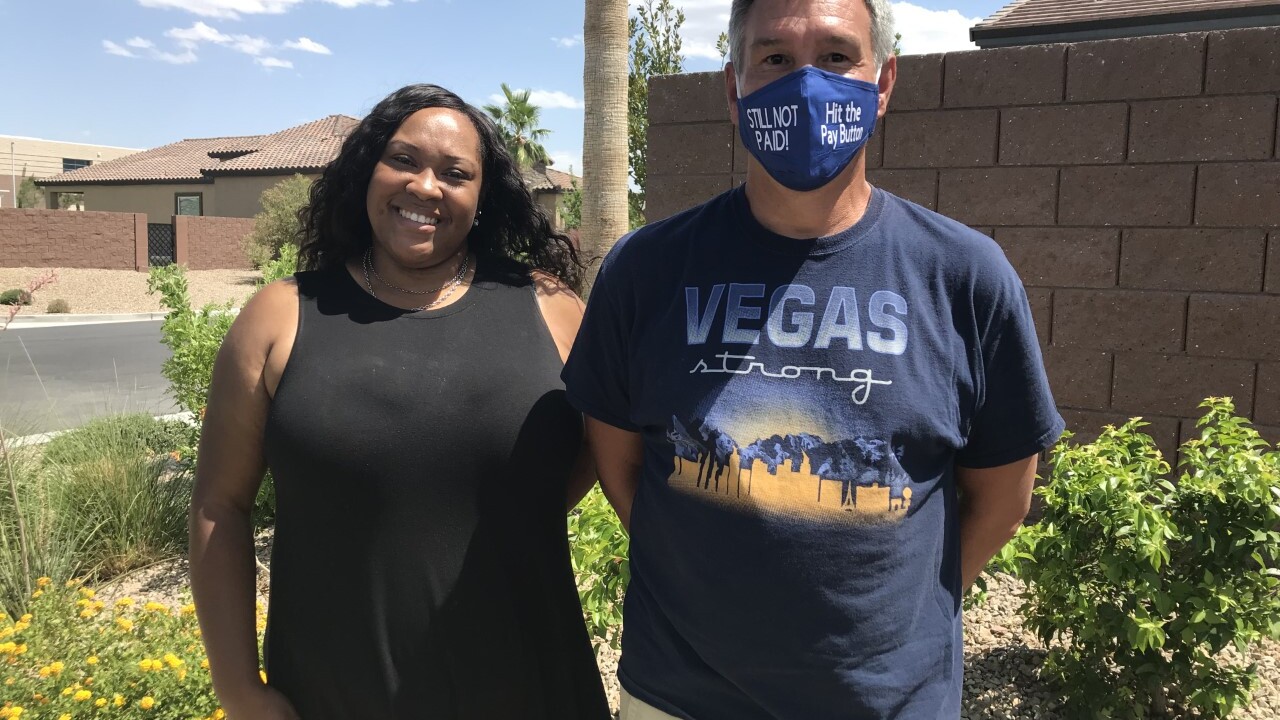 LAS VEGAS (KTNV) — We're closing in on four months without a paycheck or unemployment payments for lots of people in Southern Nevada.

Nevada's Department of Employment, Training and Rehabilitation (DETR) is facing a court hearing on July 7 in response to a class-action lawsuit that's asking the state to make its payments.

She uncovered what a former insider calls negligent and appalling.

In a memo to DETR's administrator and provided as legislative testimony, Steve Zuelke cites avoidable delays, available fixes, and experts waiting in the wings to help but never called upon.

"They missed a lot of opportunity out of the gate and that's very unfortunate," Zuelke said.

The former DETR insider says that if leaders in Nevada's unemployment office had taken control of this crisis, things would be much better.

Instead, "It is imploding on itself."

And people who were approved for payment months ago are fighting system glitches, jammed phone lines and inaction.

Here's what Zuelke expected of the agency he retired from after 25 years: "In the face of humanity, in the face of tens of thousands of people who are losing everything because of system inefficiencies and lack of steady leadership, that someone would come in and say we need to pull out all the stops."

Apparently that didn't happen. So, something else did: a class-action lawsuit filed in Washoe County against the state's unemployment division, its directors and administrators.

Tabitha Asare and Scott Howard are two of the named plaintiffs. When 13 Investigates met them, Howard was wearing a mask that said, "Still not paid! Hit the pay button."

"I had to choose between the business and me and my daughter eating," Asare said. "And it's been really, really hard."

Howard was an Uber driver who says, "I've maxed out my credit card paying car insurance, car payments. It's just mind-boggling and I haven't had any issues on my claim for over six weeks."

The lawsuit alleges failure to pay about 60,000 Nevada gig workers a half-billion dollars in unemployment compensation "when due," which means as quickly as possible once initial eligibility is determined.

Mark Thierman, the lawyer in the case, says, "What they're asking DETR to do, is do its job, which by the way, in this case, is pay money!"

Like Asare and Howard, plaintiffs Elaina Abing, Charles Ploski, William Turnley and Isaiah Pavia-Cruz applied in May and were approved for benefits, but never paid.

When Pavia-Cruz got someone from DETR on the phone, "She looked into my account and she said everything looks good, it was already reviewed, they just did not press this mythical button that says 'pay.'"

He was told it would just be a day or two. So were Asare and Howard. Then another week passed with nothing.

"And the lady tells us, 'Oh, it's gonna be 21-30 days. I don't know who told you 24-48 hours. They lied to you.' She also told us that our claims were stuck in limbo and that we shouldn't really depend on this money coming through," Asare said, after speaking with a DETR representative.

"Because of some glitch," Asare said. "They told us it was a glitch in the system to where the computer wasn't recognizing to actually pay us."

DETR has declined all of 13 Investigates requests for on-camera interviews, saying the staff is too busy.

Each time 13 Investigates asked about a newly-reported glitch, the same response was given from the director's office, which says, "We are working with the vendor on reported items and monitoring the site."

"Blaming the vendor is not appropriate in my mind," said Zuelke. "They chose the vendor. They should be providing as much input and oversight on the program as the vendor."

On top of that, the lawsuit says DETR is misinterpreting and misapplying labor laws when it comes to the self-employed and gig workers.

It says DETR's computer system flags claims for issues when there are none and manual override can take up to a month.

Zuelke says he knows how to fix that.

"Use the technology that's available to them to run a mass change as opposed to doing them as one-off decisions," he said.

The lawsuit also accuses DETR of misleading the public about the actual number of unpaid claims.

Zuelke says DETR was set up to fail.

"You just can't put that many people out of work at one time on a program that was underfunded and understaffed and not expect some kind of a train wreck," Zuelke said.

But he also says administrators have compounded the problem by failing to use their authority to make blanket determinations to ensure eligible claims are paid more quickly.

"While the division has really good people working for them at this point, they don't have experienced leadership," Zuelke said.

In April, the Employment Security Division was authorized to rehire retirees. Zuelke and others offered to help but he says DETR didn't bite... Instead, they hired inexperienced adjudicators and he can't make sense of it.

"Had I been in this situation and faced with this kind of crisis, the first thing I would've done is picked up my telephone, called every retiree I could think of and say, what have you got for me? How do we deal with this?" Zuelke said.

As it stands, lawsuit plaintiff Turnley says, "The people that answer the phone don't really give a rat's tail about what's going on."

"There's been no communication from DETR, from PUA, from anybody!" added Isaiah Pavia-Cruz.

Abing says simply, "Let us know what is going on!"

Zuelke says simple website adjustments could provide clear guidance on why payments are on hold and how to facilitate resolution.

Then there's DETR's claim that fraudulent applications are bogging things down.

"I think somebody's using that as a cop-out somewhere just to defend the lack of work," said lawsuit plaintiff Ploski.

"I ran the fraud unit for the state for a period of about 10 years," said Zuelke, who acknowledges there's a lot of identity theft out there, but cites easy ways to address it.

"For example, in the PUA program, they could very simply require the person to upload a copy of a photo ID," he said.

Other states, including Washington, New Hampshire, and Oregon, have called in the National Guard to help validate claims.

RELATED STORY: How are other states handling unemployment claims backlog?

Howard reached out to all Nevada's state and federal leaders.

"And I'm voting for anybody else," he said of those who failed to reply. "I don't care if it's a dog running against you, you're not getting my vote."

In the 3 days after 13 Investigates interviewed the class-action claimants, 4 of them got their money. That was after waiting an average of 4 months.

And though the state isn't answering questions, DETR did file a response to the lawsuit on July 1.

"Everyone within Nevada’s government and this proceeding agree that any and all eligible recipients should be paid benefits. This dispute centers on eligibility."

They argue that initial letters people got with monetary amounts just showed what they would get paid IF FOUND ELIGIBLE. They say that was not approved for payment.

They also say the reduction in revenue will not make a gig worker eligible for PUA benefits, but rather the full suspension of activities by the gig worker/independent contractor is required.

"The U.S. Dept. of Labor could cut DETR off if it doesn’t follow the letter of the law when it comes to fraud and over-payment." They say the lawsuit would force them to violate DOL guidance and risk losing the federal funds.

They claim that in an unprecedented situation with significant new programs, the numbers show DETR has paid a majority of the claims eligible for determination.

DETR has publicly stated that similar to other states, it is seeing an unusually high level of potential fraud in the PUA program compared with the Unemployment Insurance Program.

They claim that if the court compels them to pay without review for fraud then roughly $2.4 million would go to fraudulent applicants.

Because PUA doesn’t include an employer (taking away that critical verification to establish eligibility for unemployment) it’s more susceptible to fraud. They also cite the elevated risk of forged documents and false statements made by gig workers they have no quick and easy way to verify. They add that part of fraud detection includes “a random audit of sample claims to detect fraud.”

As for DETR’s computer system, they say coding for this has been complex and required multiple weeks of testing to make it functional.

They say payments will be made as soon as administratively feasible while dealing with a flood of claims that descended on an agency staffed to handle roughly two-percent of that number.

They’re focused on finding ways to enhance automated processing of claims while processing multiple years of work in a matter of weeks.

In conclusion, DETR told the court, "During an unprecedented global pandemic, Nevada seeks to pay all eligible citizens under the prior and new programs to ensure economic survival for them and our state. However, to continue doing so, Nevada is required to comply with federal requirements. Otherwise, all benefit recipients risk the federal government withdrawing future payments, to the greater harm to us all."

"DETR excuses its failure to pay benefits when due on the grounds that its task has been made impossible by DOL guidelines and regulations, combined with a suspicion of massive fraud."

They are engaged in a "witch hunt which jeopardizes the welfare of thousands of innocent claimants."

Other states who must follow the same guidelines have paid 95% of PUA applicants within two weeks of their initial application.

DETR has bogged itself down with unnecessary and unauthorized procedures causing administrative paralysis and unreasonable delays.

If DETR can only adjudicate each outstanding claim individually, it would take the state's eight adjudicators until late 2023.

The case is simply asking for payment for what they call “fail-safe” groups.

ATTORNEY'S NOTE: If you are a gig worker and are still waiting for your unemployment compensation, you are covered by this class action unless you specifically exclude yourself with the court. You do not have to “join” to be a member of the class.

Additionally, the plaintiff's answer to DETR's reply is available here.