Sunday sees 20+ mile backup on I-15 towards California 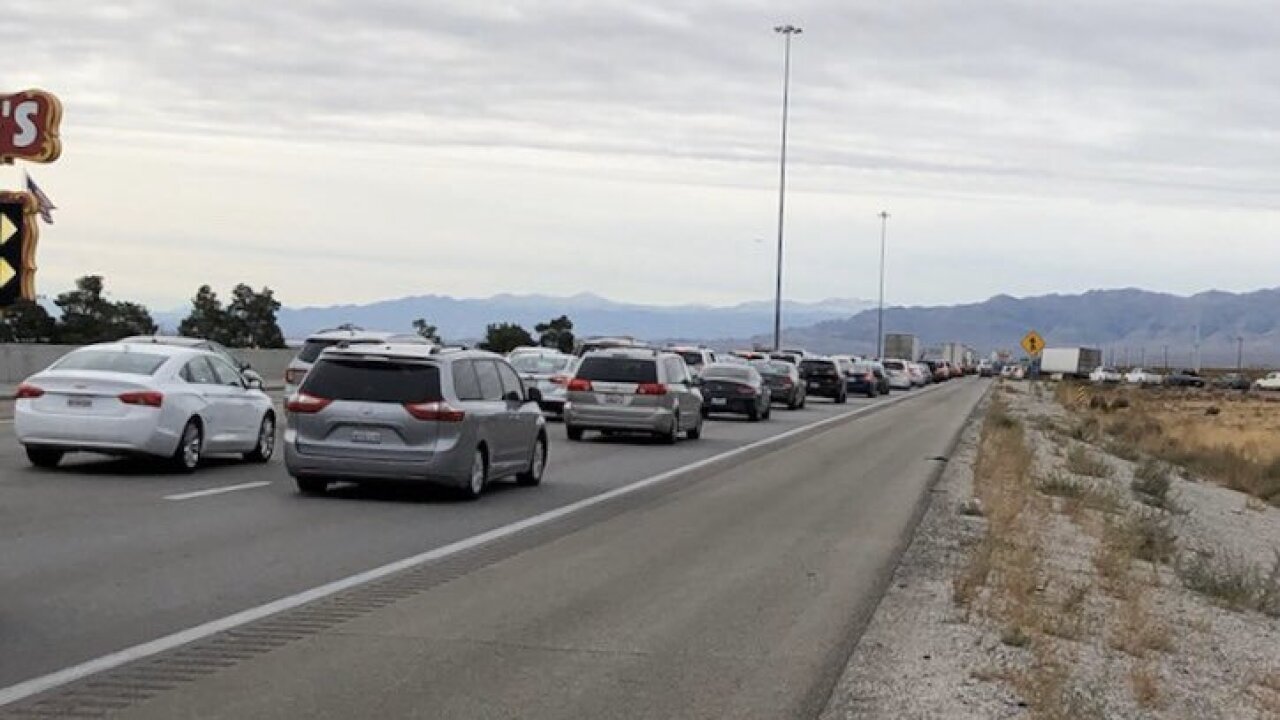 LAS VEGAS (KTNV) — Heading up to Mount Charleston to enjoy a Sunday in the snow? On your way to California after a weekend in Las Vegas? Here's a roundup of travel information following the Thanksgiving holiday weekend.

6:30 P.M.
Bumper to bumper traffic continues on I-15 near Primm, as thousands of people head towards California after the Thanksgiving weekend. READ MORE

1:31 P.M.
Lee Canyon Road (SR-156) at Mile Marker 3 (near Lee Canyon Summer Home Area) is closed due to congestion in the area, Nevada Department of Transportation reports. Use caution on the mountain.

12:55 P.M.
There's a crash on I-15 northbound at Riverside Road near Bunkerville (near the Arizona and Utah borders at Nevada), RTC reports. The off ramp is closed.

11:25 A.M.
Storms around the country could impact flights at McCarran. A West Coast storm is expected to hammer everything from Seattle to south of Los Angeles, CNN reports. To check the flight status of a departing or arriving flight click here.

11 A.M.
Nevada Highway Patrol says traffic is backed up 16 miles from Primm. NHP says troopers are writing tickets to drivers trying to bypass traffic by driving in the shoulder. It's $200 fine.

There’s no way to sugar coat it, if your driving to California be ready for the traffic. Traffic is already backed up 16 miles from Primm. We have Troopers already writing those folks who think it’s okay to drive in the shoulder. That’s a $200 fine, points, increased insurance. pic.twitter.com/kxMVDXCDuZ

WATCH: 13 Action News Live Drive of I-15 near Primm

10:55 A.M.
The National Weather Service reports Mount Charleston received 30 inches of snow in November! if you plan on heading up to the mountain on Sunday, you can check weather conditions on the NWS website here. Current road conditions and closures on the mountain can be found here.

November made quite the splash as many areas across the region received significant, some record, amounts of precipitation (snow/rain) ❄️💦

The highest rainfall amounts occurred along the Colorado River and in northwest Arizona where 2-3” fell. #azwx #cawx #nvwx pic.twitter.com/wNd8sqIO3k

10 A.M.
There's a crash on I-15 southbound at mile marker 17, according to RTC. The left shoulder is blocked.

Heading up to Mount Charleston for the day? Authorities ask that drivers be patient and find legal parking.

Just a quick example of the crowds here before noon, all parked illegally. Don’t risk the ticket (and getting hit) just to play in the snow!@NHPSouthernComm @LVMPD @HumboldtToiyabe @ClarkCountyNV pic.twitter.com/gy4c8qAigk

If you aren’t already on your way to play in the snow today, you’re going to be stuck in traffic and searching for legal parking. PLEASE be patient and ALWAYS make sure your tires are parked to the right of the white lines or you’ll be endangering traffic & receive a ticket. pic.twitter.com/qUXxcVI4Bp