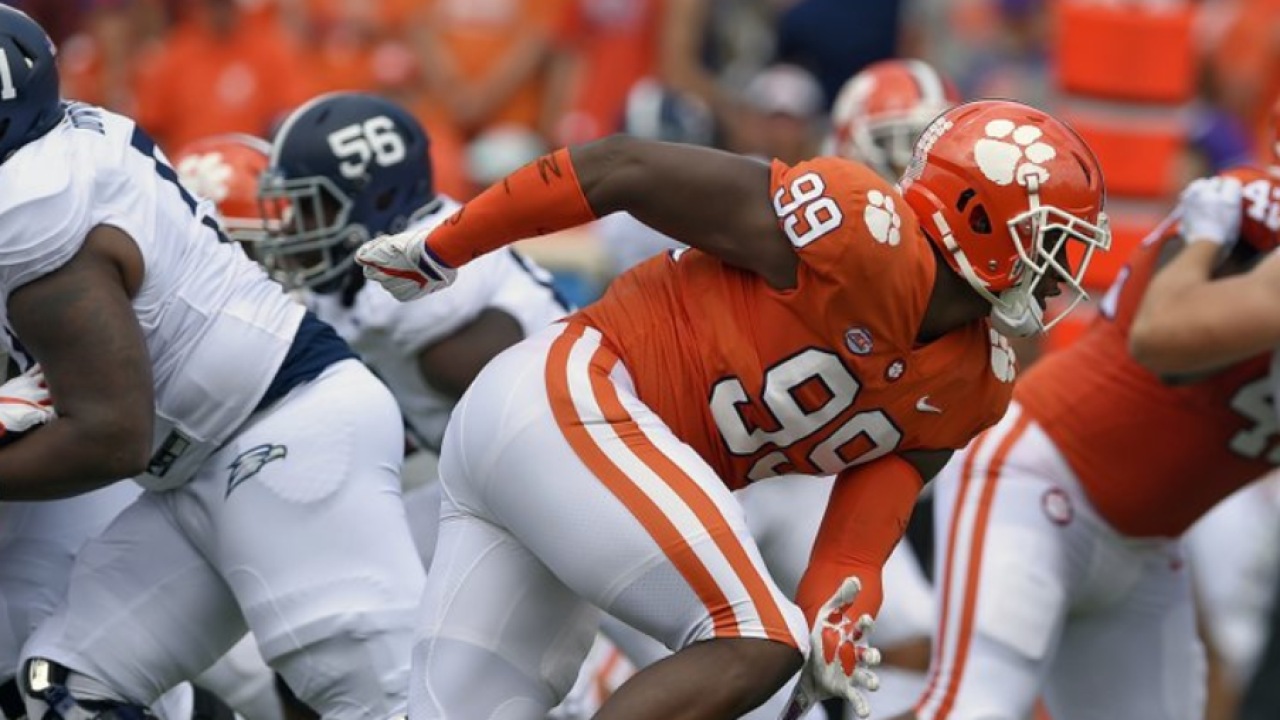 CALIFORNIA (KTNV) — Mike Mayock pulled off a bit of a shocker with his first pick as an NFL general manager that even surprised the player he selected.

The Oakland Raiders used the fourth pick in the draft on Clemson defensive end Clelin Ferrell on Thursday night, passing up other pass rushers rated higher by analysts in the team’s quest to find a replacement for Khalil Mack.

JUST IN: @Raiders select DE Clelin Ferrell from Clemson with No. 4 pick in #NFLDraft. https://t.co/ot8sSJLxdN pic.twitter.com/pPH2ZiPqey

Ferrell said he knew the Raiders liked him but didn’t know if they would use the first of three first-round selections to take him. Many analysts had players like Kentucky edge rusher Josh Allen and Houston defensive tackle Ed Oliver rated higher than Ferrell but Mayock and coach Jon Gruden went a different direction.

“I’d be lying to you if I said I wasn’t surprised,” Ferrell said. “This was a really, really long process for me. I don’t pay attention to the mock drafts. Those things are stupid. Just talking to my agent, we didn’t know what to expect going in. But me personally, I always felt like I was going to be a Raider. I had such a good relationship and good meetings with the Raiders. It was just a great process.”

The Raiders then used the 24th overall pick acquired in the deal that sent Mack to Chicago to take Alabama running back Josh Jacobs to replace Marshawn Lynch, who isn’t expected to return this season. Oakland then took Mississippi State safety Jonathan Abram with the 27th pick acquired from Dallas for receiver Amari Cooper.

JUST IN: @Raiders select RB Josh Jacobs from Alabama with No. 24 pick in #NFLDraft. https://t.co/ot8sSJLxdN pic.twitter.com/cWzGECVwzi

The Raiders became the fifth team this century to make three first-round picks in the same draft.

Ferrell called himself an “NFL historian” and pointed out past great defensive linemen in Raiders history like Hall of Famers Howie Long and Ted Hendricks. He also said he models his game on the field on Aldon Smith, who played briefly with the Raiders before off-field issues derailed his career.

The Raiders’ most glaring need was at edge rusher after trading Mack last year to Chicago for a package that included two first-round picks. Oakland finished last in the NFL with 13 sacks in 2019, 17 fewer than the next worst team. Their 95 total pressures, according to SportRadar, also ranked last — 29 fewer than 31st place Tampa Bay.

Ferrell had 11 1/2 sacks last season for the national champion Tigers and finished with 27 sacks in 84 career games. He also had 59 quarterback pressures, according to Sports Info Solutions.

Oakland has been busy this offseason, adding receivers Antonio Brown and Tyrell Williams, tackle Trent Brown and several potential starters in the back seven on defense. But they have little in place at edge rusher with Arden Key and Benson Mayowa the top players currently on the roster. Key had just one sack as a rookie, while Mayowa has 13 sacks in 72 career games.

Jacobs was the first running back or receiver taken in the draft despite being only a part-time player in college at Alabama. He had double-digit carries just seven times in his career and ran for 100 yards only once as he shared time with Damien Harris and Najee Harris.

Abram is a versatile safety capable of playing both in the box or deep. He gives the Raiders insurance if they decide not to pick up the fifth-year option on 2016 first-round safety Karl Joseph, who is entering the final year of his rookie deal.