McGregor and Mayweather fight it out on social media

Many people believe it to be a foregone conclusion that Floyd Mayweather will beat Conor McGregor in their boxing match, but we're wondering how the two match up in a different arena — social media.

Who's really the champion in the world of social media? In the week leading up to the big fight, Conor McGregor and Floyd Mayweather are living up to their nicknames.

We took a look at some numbers from the social media rating service Crowdtangle for the past 7 days.

Mayweather still holds the lead on total Twitter followers with over 7.4 million, while McGregor has 5.7 million followers.

Mayweather's tweet with the most interactions shows that he has a flair for marketing.

Wake up Floyd. It's all over. pic.twitter.com/XfssL4HrjV

Twitter is the favorite social media of many celebrities and @TheNotoriousMMA is near the top of the list when it comes to likes and retweets. Take a look at how he compares: 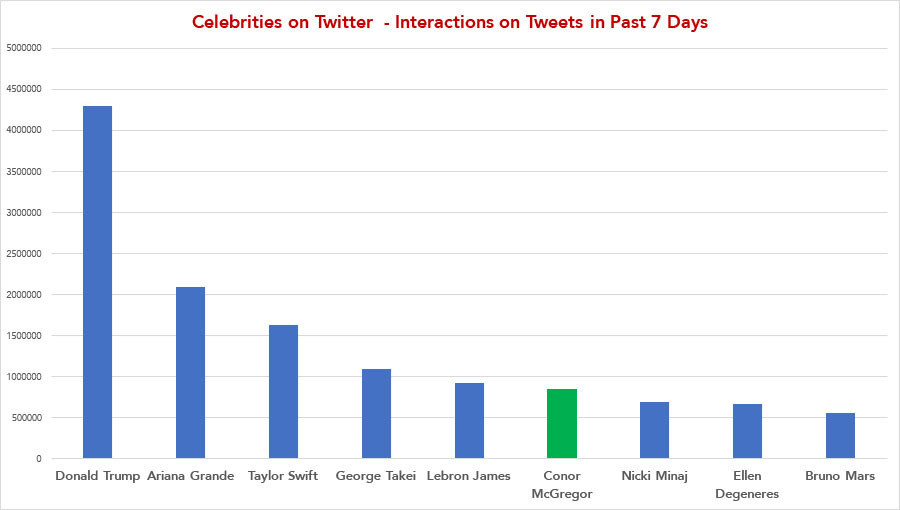 Conor McGregor's top Facebook post is also a video that shows his love for his Irish fans.

A post shared by Conor McGregor Official (@thenotoriousmma) on

We'll have to wait to see how the fight plays out in the ring, but after looking at these numbers we can see that the fight has catapulted Conor McGregor into another stratosphere of mainstream stardom.

It'll be interesting to see how it affects his future in the UFC and as a fighter.