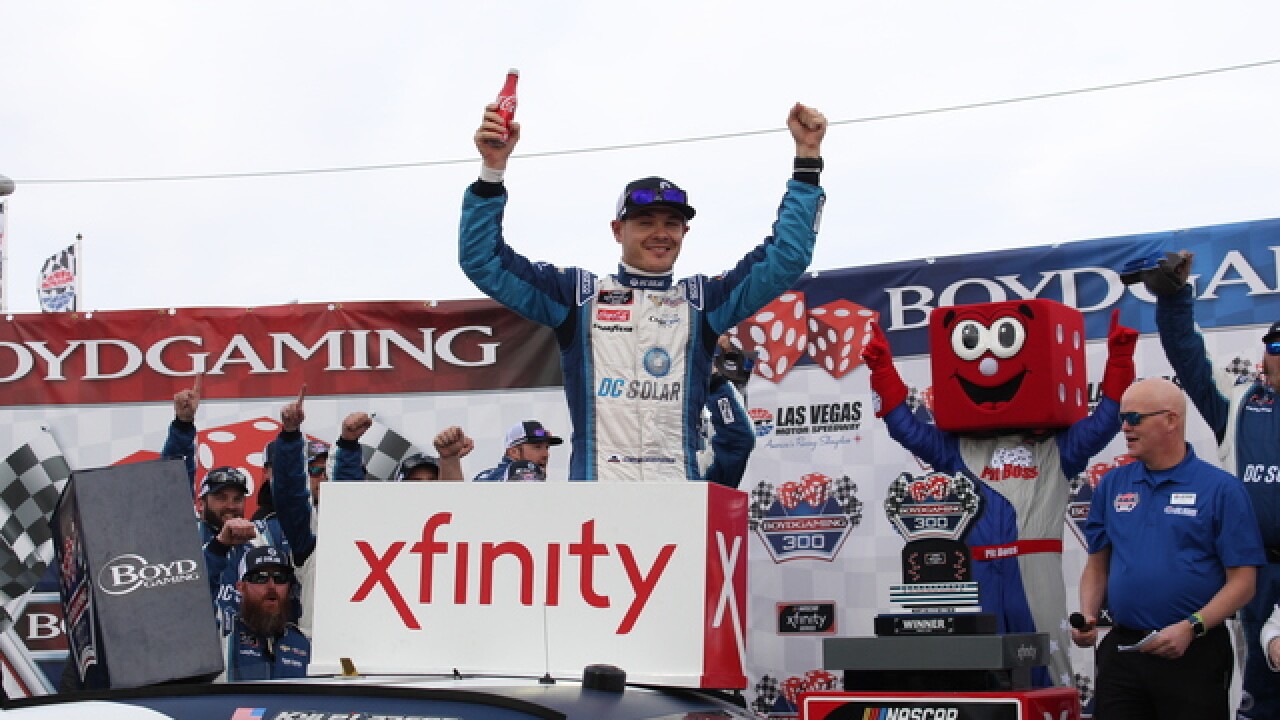 Copyright 2018 Scripps Media, Inc. All rights reserved. This material may not be published, broadcast, rewritten, or redistributed.
Jason Harvey
<p>Kyle Larson took the checkered flag at the Boyd Gaming 300 on March 3, 2018, at the Las Vegas Motor Speedway.</p>

Larson earned his ninth career Xfinity victory and his first in Vegas, where he finished second in the Xfinity and Cup series races last year.

The 25-year-old Californian claimed the lead early on in his Chip Ganassi Racing Chevrolet, and avoided any late-race fuel trouble when Ryan Reed blew a tire with 16 laps to go.

Larson is the 10th consecutive different winner in the Xfinity race in Vegas, and the Cup star was clearly the class of the field. He capably navigated wind gusts topping 25 mph on the north end of the Las Vegas Strip to earn his fifth consecutive top-three finish in Xfinity races.

"This race car is so fast," Larson said. "It was really fast last year, but you never really know. This was my first time with this body, and it performed well."

Yet Larson was uncertain whether his fuel would last until the finish, but the caution for Reed allowed Larson to pit. Larson quickly reclaimed the top spot despite falling behind Tyler Reddick out of the pits, and Larson stayed in front after the final restart with seven laps left.

Kyle Busch surged back into 14th, but lost his hopes of a three-victory weekend. The Las Vegas native won the Truck Series race from the pole on Friday night.

Busch lost any chance at contention late in the race when he was hit with a drive-through penalty because the crew member in charge of fueling caught a loose tire during a pit stop.

Larson passed Blaney on a slick move with 73 laps to go, but lost his top spot with a slow pit stop under caution moments later after Austin Cindric wrecked. Larson swiftly surged from seventh into second, and he rolled back in front with 48 laps left.

The Xfinity race should benefit the drivers competing in Sunday's race, and it will provide valuable information for the teams returning to Vegas in September for the track's second race of the season.