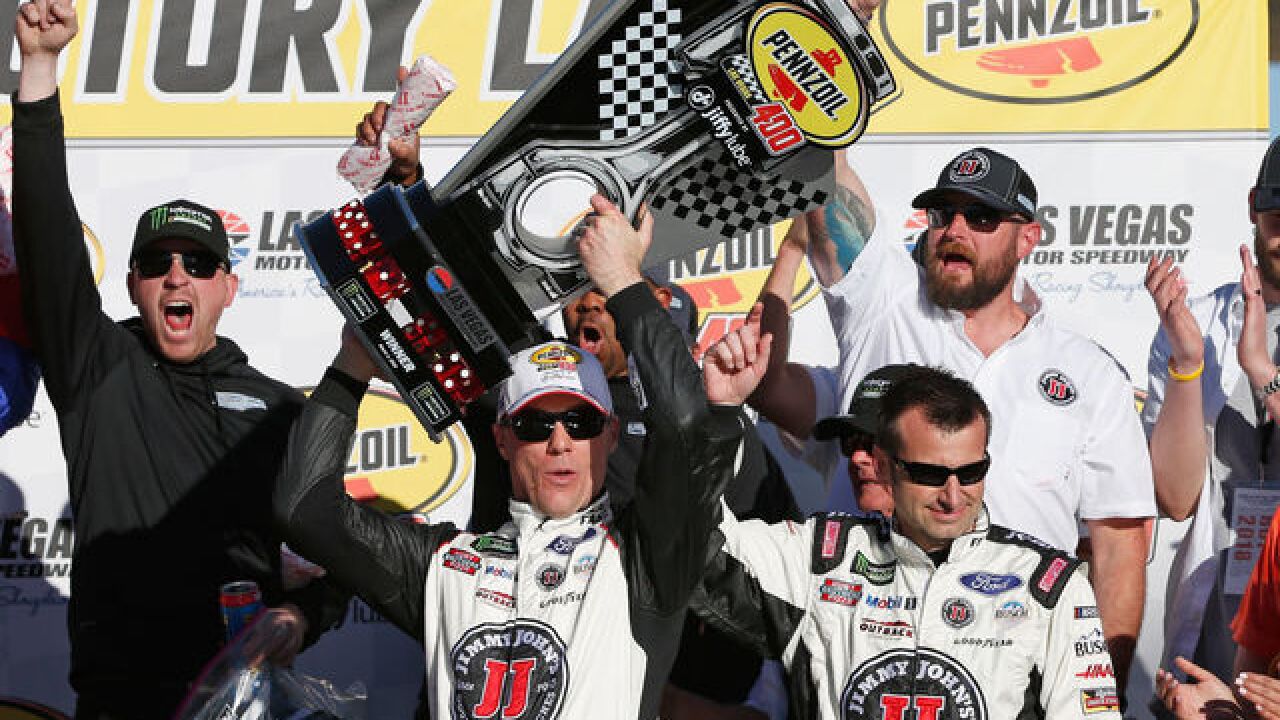 The Latest on NASCAR's Vegas race (all times PST):

Kevin Harvick raced to his second straight NASCAR Cup win with a dominant performance at the Las Vegas Motor Speedway on Sunday, earning his 100th career win across the three national series.

Harvick followed up his stellar performance last weekend in Atlanta with another lopsided victory in his Stewart-Haas Racing Ford. He led 209 of the 267 laps, won all three stages and even held off a late charge from local product Kyle Busch to win in Vegas for the second time in four years.

Busch got close to his second career victory in his hometown, but couldn't overcome the dominant leader.

Only Richard Petty, Kyle Busch and David Pearson have won more races across the three national circuits than Harvick, the 42-year-old Californian.

Busch lost control and ran Chase Elliott into the wall shortly after a restart early in the final stage of the NASCAR race in Las Vegas. Busch and Elliott were both done for the day after a crash that necessitated a long caution for fluid cleanup.

The 39-year-old Busch has never won at Las Vegas Motor Speedway, which was built while he grew up in town along with his younger brother, Kyle.

Kurt Busch failed to win the Cup race in Vegas for the 17th time. He has started on the pole twice, but has only one top-five finish here despite calling it a top priority in his career.

Kevin Harvick has easily won the first two stages of the NASCAR race in Las Vegas.

After starting on the front row, Harvick dominated the first stage and comfortably claimed the second stage to put himself in prime position for back-to-back race victories after his comfortable win in Atlanta last week. The 42-year-old veteran has led 144 of the 160 total laps in his Stewart-Haas Racing Ford.

Pole-sitter Ryan Blaney got back into second, and Kyle Larson is third after winning the Xfinity Series race in Vegas on Saturday.

Josh Frankos, the tire-changer on Darrell Wallace Jr.'s Richard Petty Motorsports team, injured his hand while preparing for the Vegas race and was sent to a hospital on Sunday morning. Michael Hubert filled in for him on pit road.

The injury couldn't keep Frankos down, however: He returned to the track for the race.

Kevin Harvick has easily won the first stage of the NASCAR race in Las Vegas.

Harvick won in style last week in Atlanta, and the veteran needed all of two laps to get ahead of pole-sitter Ryan Blaney in Vegas. Harvick, who started on the front row, pressed his advantage throughout the opening stage and swiftly lapped Jimmie Johnson and several other cars.

Defending Vegas champion Martin Truex Jr. is in second place. In third is Kyle Larson, who won the Xfinity Series race on Saturday.

Jimmie Johnson was sent to the back of the field for the start of Sunday's NASCAR race at Las Vegas because his car needed four trips through inspection to be approved for participation.

NASCAR ejected Johnson car chief Jesse Saunders because the car failed inspection three times. The Chevrolet passed on its fourth inspection. Saunders is responsible for setting up the Camaro.

Johnson is a seven-time NASCAR champion and the winningest active driver on the Vegas track, but he is off to a slow start this season. He crashed in all three races at Daytona International Speedway and was 27th last week at Atlanta. He's 35th in the Cup standings.

Ryan Blaney started from the pole in Vegas.