Rounds of rain in the forecast through next week 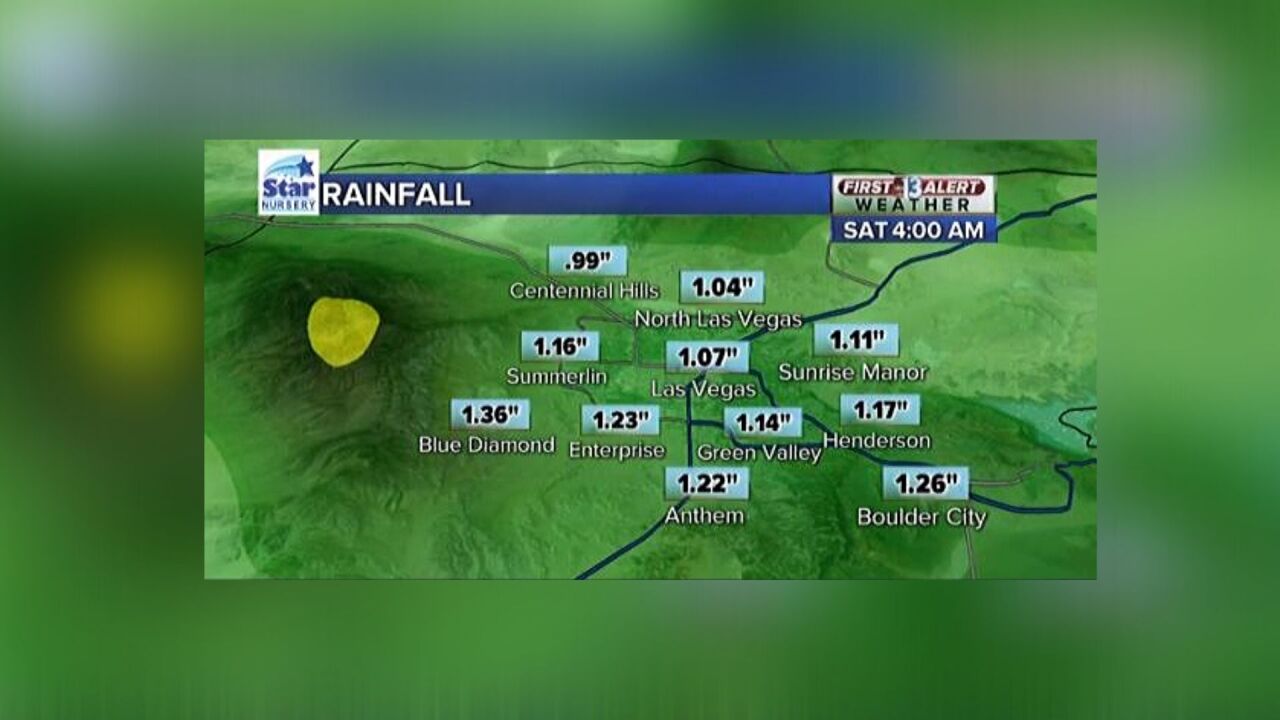 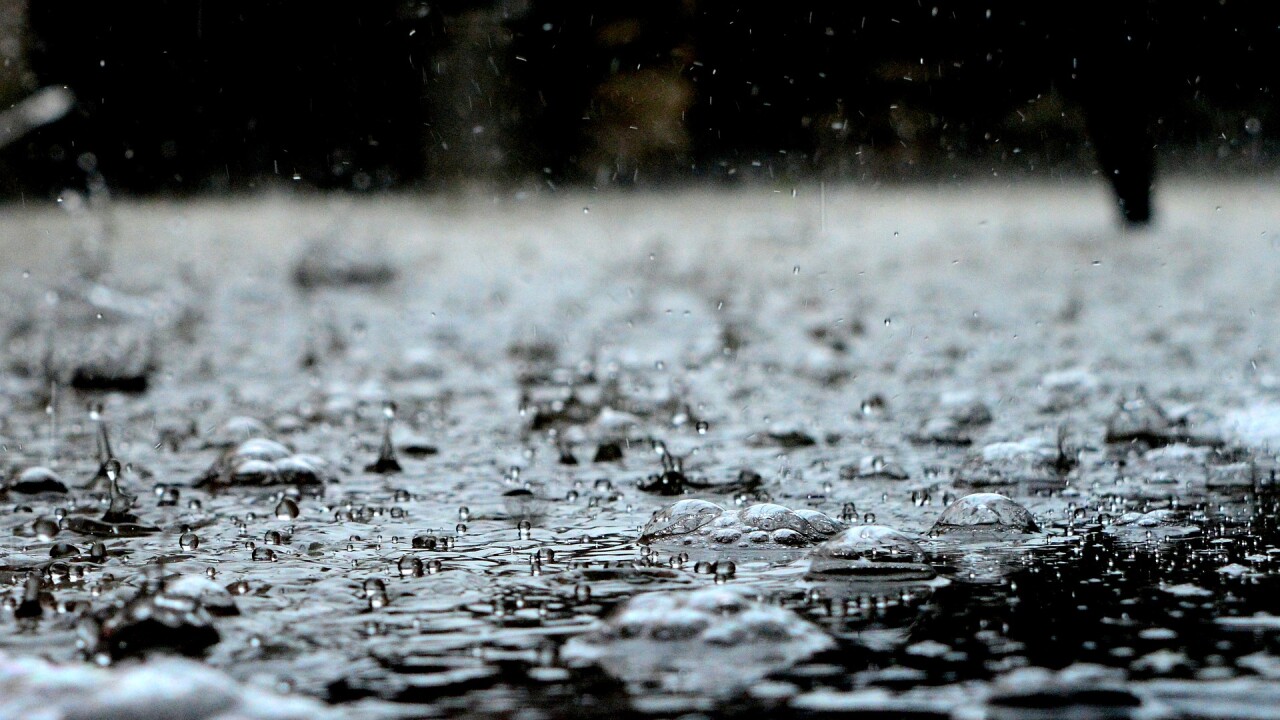 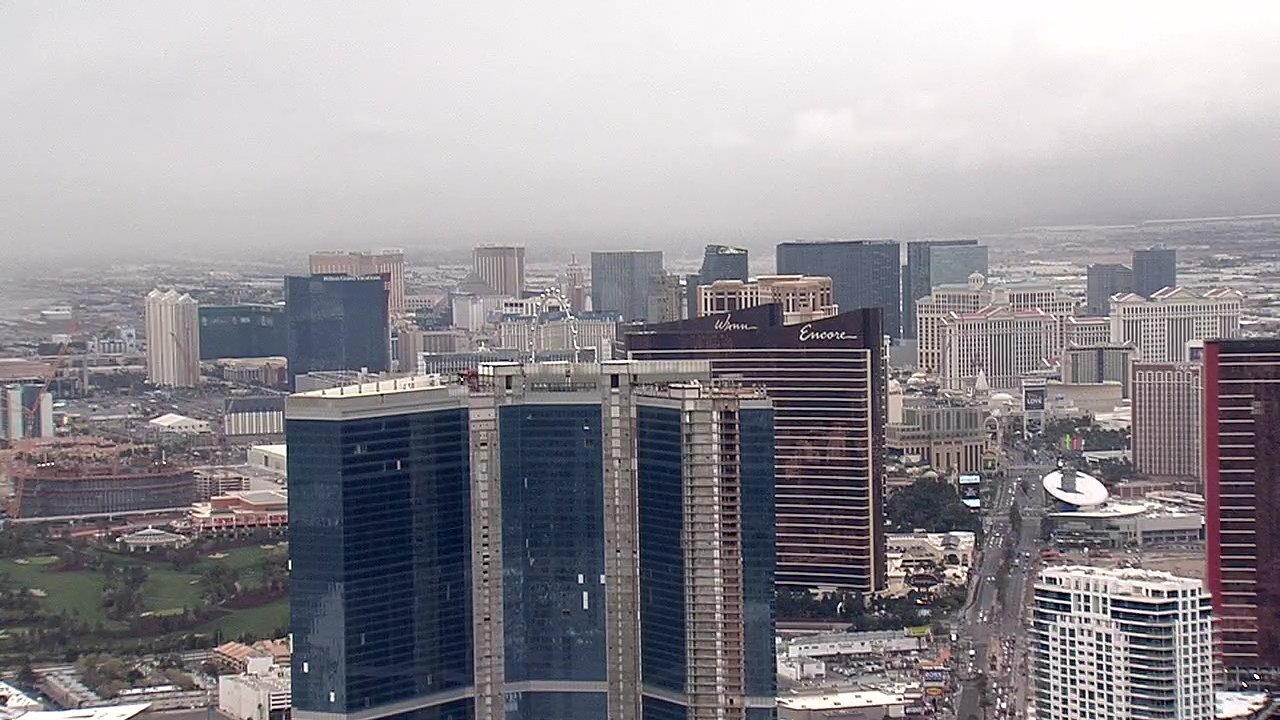 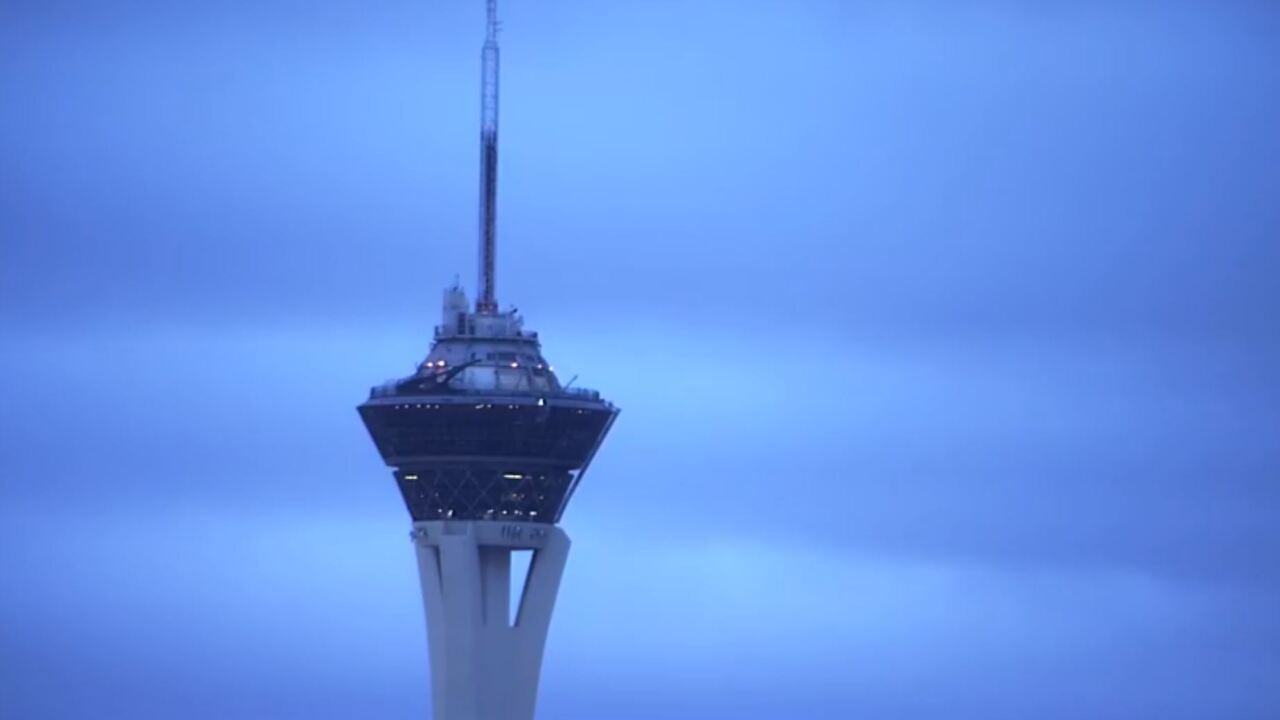 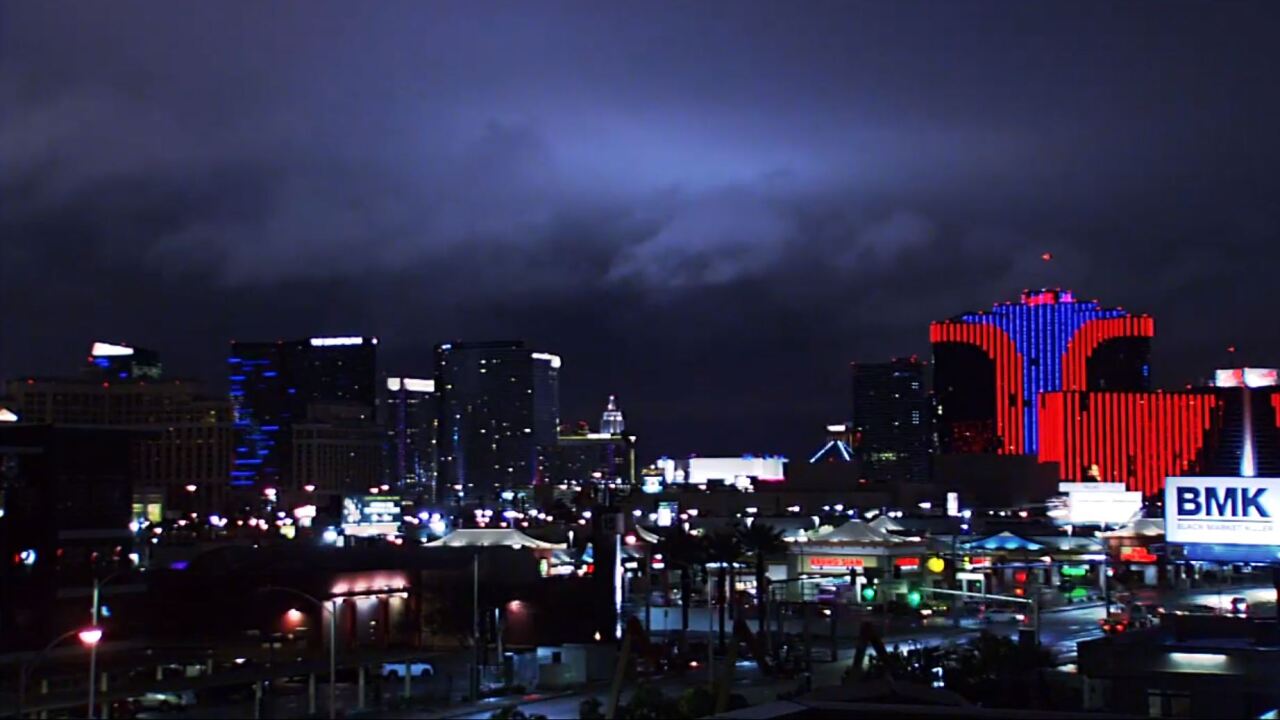 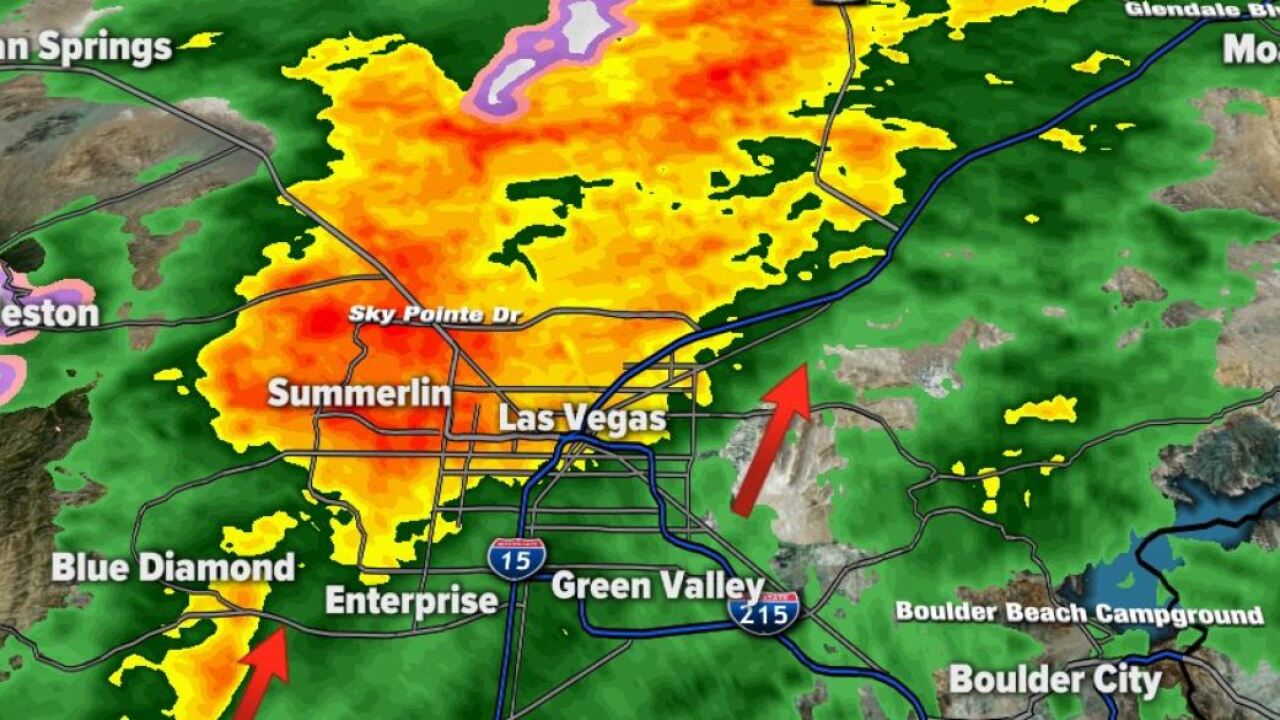 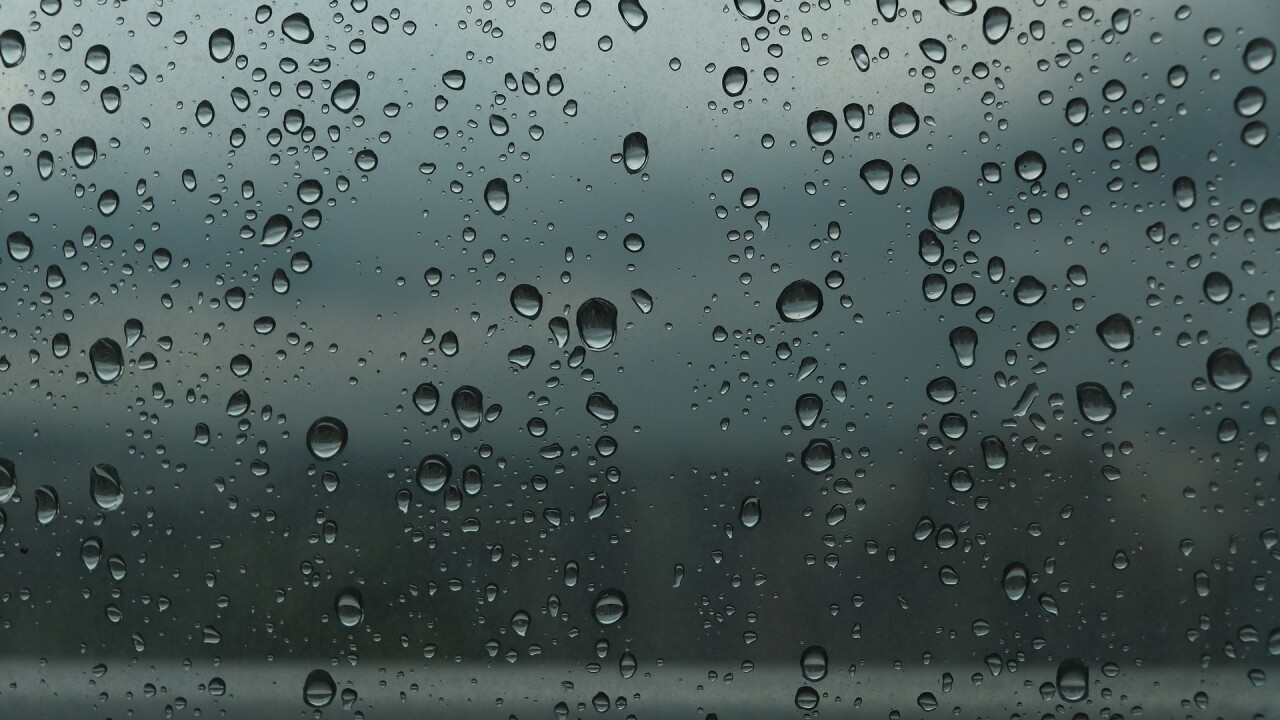 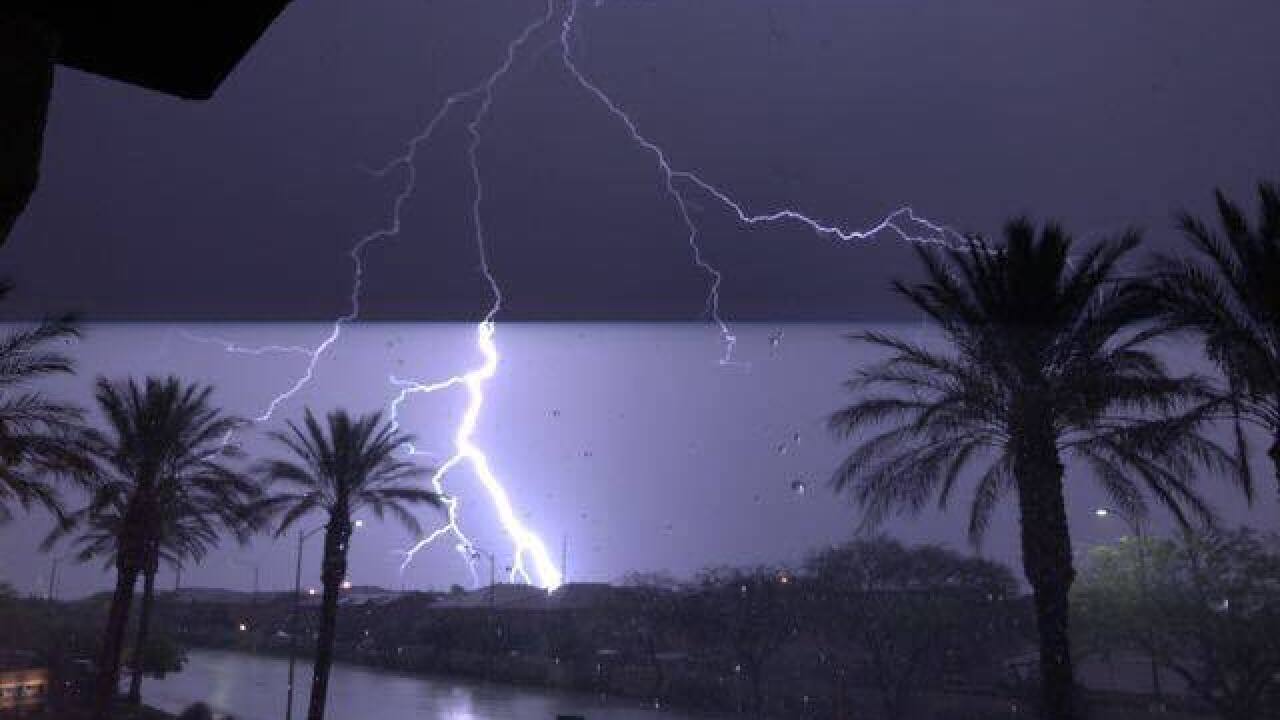 9:30 A.M. UPDATE: It appears that the rain is starting to wind down in the Las Vegas area.

The good news is that we're down to just a few sprinkles at 9:30 a.m. Additional showers the rest of today will be isolated in nature. pic.twitter.com/XIjeoK4GZd

5:30 A.M. UPDATE MARCH 13: Another round of showers hit the Las Vegas valley around 1:40 a.m., according to the National Weather Service.

Big downpours in parts of Las Vegas at 3:42 a.m. The North Las Vegas Airport just picked up nearly 1" in under an hour. The ground is wet from all the rain yesterday afternoon and evening, so a Flood Advisory is in place for Las Vegas until 6:15 a.m. https://t.co/TgP2aFrxDt pic.twitter.com/581m1Rpc0N

Big downpours were spotted in several parts of the valley around 3:4 a.m. The North Las Vegas airport saw almost an inch of rain in under an hour.

Big downpours in parts of Las Vegas at 3:42 a.m. The North Las Vegas Airport just picked up nearly 1" in under an hour. The ground is wet from all the rain yesterday afternoon and evening, so a Flood Advisory is in place for Las Vegas until 6:15 a.m. https://t.co/TgP2aFrxDt pic.twitter.com/581m1Rpc0N

A Flash Flood Warning was in effect for most of the day Thursday in what has already been a very wet week for Southern Nevada.

The rains started Tuesday morning and kicked off this unsettled and rainy weather pattern. Here's a roundup of weather-related updates:

UPDATE 10:30 P.M. MARCH 12: Another round of moderate to heavy rainfall is in the forecast overnight Thursday and into Friday morning with isolated thunderstorms also helping to create locally heavy rainfall.

The National Weather Service said rainfall totals can be up to over an inch of rain in particular areas, with higher amounts in higher terrain, especially on east facing slopes.

FLASH FLOOD WATCH for @CityOfLasVegas beginning THIS AFTERNOON thru FRIDAY MORNING. Heavy rain coming from the south could cause flash flooding. Do drive/walk thru flood waters. Stay out of washes/detention basins. Do not pass barricades on flooded roads-state law. pic.twitter.com/8bQPsL3rZP

It "looks like rain" in Las Vegas but the only organized showers are in Boulder City as of 9:23 a.m. pic.twitter.com/MjeVvTCOSm

UPDATE 7:32 A.M. MARCH 11: 13 Action News Meteorologist Justin Bruce takes a look at when the rain is supposed to hit the valley next.

Another round of heavy rain is expected late Thursday afternoon through Friday morning. Totals up to 1.00" and street flooding are possible if this forecast verifies! https://t.co/vMVGM2gmQS pic.twitter.com/3rV5wwZfl2

Watch a view of the Las Vegas Strip Wednesday morning:

Here are rain totals from Tuesday morning and Tuesday night. A few more hundreths of an inch are possible this Wednesday morning, and a stray shower is in the forecast today. Another round of heavy rain is expected late Thursday through Friday! pic.twitter.com/Cn72J0fDnr

Curious how much rain fell through the last 24 hours? 🤔

Here's a look at the reported rain across the Las Vegas Valley since 5AM yesterday... 🌧️#vegasweather #nvwx pic.twitter.com/6mEE95QGkF

Though the heaviest rain has ended, roads are still very slick. Significant roadway ponding will further increase travel difficulties on surface streets. Give yourself extra time to get where you need to go and drive with caution!

Foggy rather groggy. It's 54° with 100% humidity at @LASairport at 3:00 a.m. So far the storm has delivered 0.48" of rain. It's misting now, and a few more showers are possible through the day. pic.twitter.com/03d5mtwJdw

Watch a view of the Las Vegas Strip on Tuesday:

Snow update: The first flurries brought a lil’ half inch refresher so far. A couple more trace storms expected through the day then the system really moves in tonight! Up to 10” possible by tomorrow evening!

UPDATE 9:54 A.M. MARCH 10: It's snowing at Grand Canyon National Park! For a list of National Parks near Las Vegas and days when they are free click here.

It’s snowing at the @GrandCanyonNPS at the south rim! The park says the canyon is not visible right now due to the snow and fog. Here’s a list of #nationalparks near #LasVegas: https://t.co/y80TKKHZvv pic.twitter.com/8ygva8rlqw

UPDATE 9:30 A.M. MARCH 10: McCarran Airport is advising travelers to check ahead and make sure their flight is not delayed due to rain in the western region. For arrival and departure flight information, click here.

Sorry folks, delays ahead! 🌧 Weather conditions in the western region may cause flight disruptions today. Please check with your airline to determine the most up-to-date status of your flight.

UPDATE 9:15 A.M. March 10: Two Clark County School District staff members were transported to UMC in unknown condition following a crash in involving an overturned school bus this morning on 215 near S. Buffalo, according to school police. No students were on the bus at the time of the crash. MORE BREAKING NEWS

UPDATE 8:30 A.M. MARCH 10: Multiple crashes have been reported around the Las Vegas valley, including one involving a school bus. It is unclear at this time if there were any students on board at the time of the crash. Whe have reached out to authorities for more details, check back for updates. For real-time traffic updates click here.

UPDATE 6:15 A.M. MARCH 10: Justin Bruce have an over view of the day. For the interactive radar he mentions in the video, click here.

UPDATE 5:30 A.M. MARCH 10: There is light to moderate rain across the valley.

13 Action News Meteorologist Justin Bruce has what to expect for your morning commute.

Streets could turn damp for the morning commute! pic.twitter.com/Z1TnLW15HT

Chopper 13 is flying this morning despite a drizzle on the window!

Rain drops keep falling on my window. Get ready for wet roads and use caution while driving. Stay tuned to @Ktnv for the latest weather updates from ⁦@just1nbruce⁩ this morning and ⁦@danibeckstrom⁩ this afternoon pic.twitter.com/a3GrIsVTJe

It’s a bit rainy outside in parts of the #LasVegas valley. @just1nbruce has your weather forecast on #GMLV. Watch live on https://t.co/5PzWVcFsqt, our KTNV mobile app, or your favorite streaming service. 🌧 This look at the radar from @NWSVegas pic.twitter.com/bh1OsmBehB

ORIGINAL STORY
LAS VEGAS (KTNV) -- It's going to be a much wetter than usual week in Las Vegas this week.

The valley could see as much as an inch of rain over the next few days and that is more than we usually receive for the entire month of March.

Monday will probably be the driest day of the week with a forecasted high of 68 degrees. Clouds will increase throughout the day.

The rain is expected to begin on Tuesday morning, with the heaviest rainfall expected late Tuesday night and early Wednesday morning.

The National Weather Service is forecasting several days of rain this week in Southern Nevada. Remember to conserve water and turn off sprinklers. pic.twitter.com/7mfXFfQFDi


There will remain a chance for rain through Sunday.

Snow is also expected in the Spring Mountains above 8,000 feet.

Today could be the last dry day of the week. Get the windshield wipers checked! Good infographic by @NWSVegas pic.twitter.com/J0E7qHzYN8