This is a roundup of all the breaking news in the Las Vegas valley for July 13, 2017.

Interstate 15 has reopened after being closed because of a standoff for several hours. The suspect was taken into custody.

The I-15 is closed at West Cactus Avenue for a police incident. NHP says it will be closed for an extended amount of time as Las Vegas police investigate. Las Vegas police say that they discovered a car was linked to an individual with a felony warrant after receiving a call about a suspicious vehicle. They attempted to stop the car, which led to a standoff.

Four people were treated for smoke inhalation after a fire at a warehouse in North Las Vegas. Fire officials said a dryer caught fire at Brady Linen Services, located at 1 W. Mayflower Avenue, near Commerce Street and Cheyenne Avenue. The sprinklers went off, preventing the flames from going through the roof. It took firefighters an hour to put out. No one was transported as a result of the incident. The investigation is ongoing.

The Clark County Coroner identified the man who was fatally shot after attempting to stab a police officer on Tuesday as 27-year-old Caleb Edward Blaylock from Las Vegas. READ MORE.

UNLV has reopened their campus. Students are urged to stay away from the area of the PSB due to an ongoing investigation.

WATCH WITNESS TALK ABOUT THE SHOOTING

UNLV & LVMPD on scene. Investigation continuing. No injuries. UNLV is open. All advised to stay away from area of PSB.

UNLV is urging students to stay indoors after gunshots were heard on campus. More details to follow.

LVMPD received information of a shooting which occurred at UNLV. The incident is not being investigated by our department. Contact @UNLVPD.

This area is just north of the @ThomasAndMack Center on the @UNLV Campus. https://t.co/gkI6nh5Ohz

A two car crash reported near Fort Apache and Warm Springs. One vehicle can be seen lying on its roof. Officers and an ambulance are on the scene. 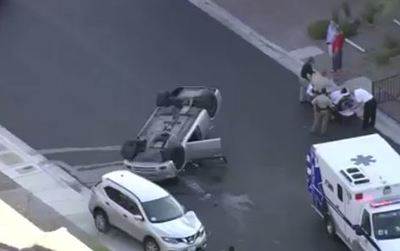