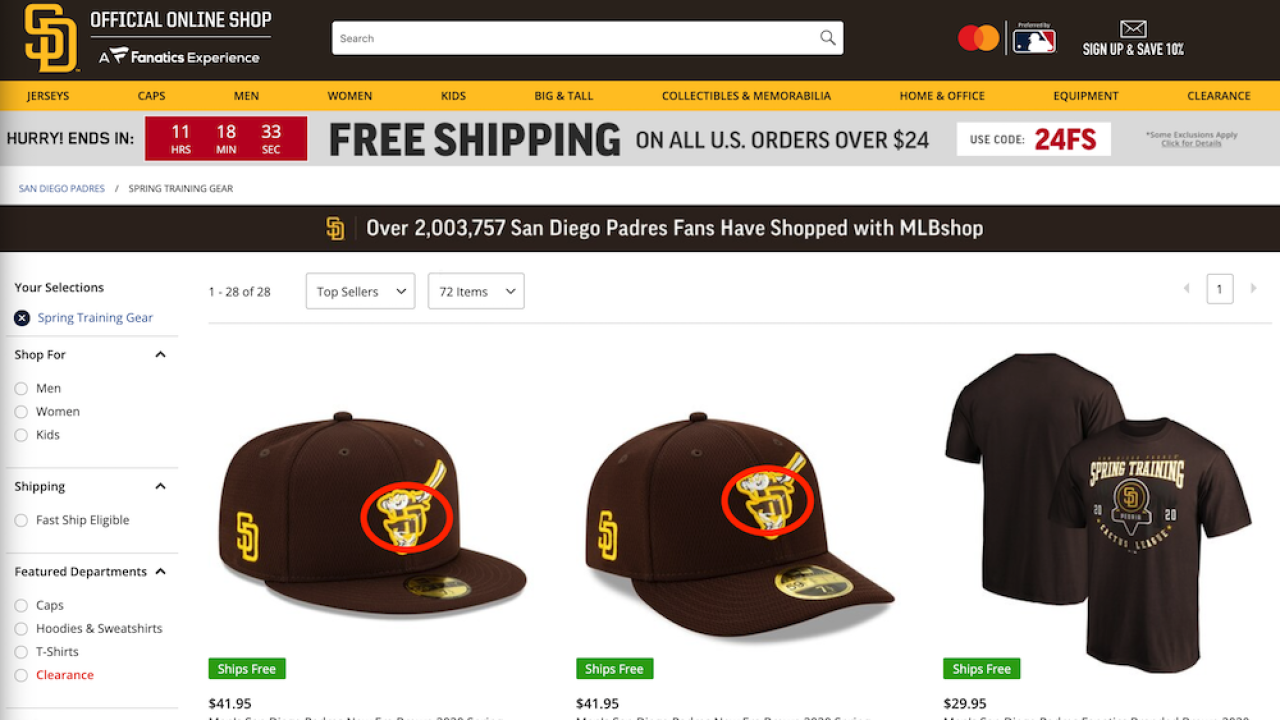 The San Diego Padres say they will not be wearing the newly-unveiled Spring Training caps for the majority of the team's spring workouts in Arizona, the San Diego Union-Tribune reports.

The Padres' decision comes after many fans pointed out that an element of the cap design resembled a swastika.

Last week, cap-maker New Era unveiled new cap designs for all 30 MLB teams that would be worn during Spring Training. Each team's design featured a team logo laid over a secondary logo.

If you don't fancy your odds in the contest, you can purchase any of the new 2020 New Era #MLB Batting Practice / Spring Training caps right now at https://t.co/6nPsHGx8zk pic.twitter.com/3jdJZKp646

You guys got an amazing hat. Most of the rest got disappointment. The Padres got crapped on. This is hideous. pic.twitter.com/6RdWkmGzE6

According to many on social media, the point where the "S" and "D" intersect resembles a swastika. That portion of the logo appears on a dark field, while the rest of the logo is washed out on a light background.

At times I think the ⁦ @SFGiants ⁩ lack in creative hats available, but then I’m thankful they’re not the Padres who have what looks like a swastika in their newest headwear. pic.twitter.com/vEw4b5ooiN

So I know I'm not the only person that saw this, but our spring training logo has a swastika in the middle? @Padres pic.twitter.com/GmKbmRhuwj

On Thursday, the Padres confirmed that the team would wear their standard brown-and-gold "SD" game caps for all Spring Training games. However, the team did confirm that the double-logo caps would be used on the field at least once during Spring Training.

The Padres said the decision to eschew the Spring Training caps for their regular game caps was due to fans' "overwhelmingly positive response" to the team's decision to return to a brown-and-gold color scheme this offseason. The team unveiled new brown-and-gold logos, uniforms and caps in late 2019, marking the first time Padres had used brown as an official team color since 1990.

“Following our offseason uniform rebrand and the overwhelmingly positive response from Padres fans, we’ve decided to wear our regular season brown caps with the gold ‘SD’ for the majority of spring training,” Padres Chief Marketing Officer Warne Partello said in a statement.

The double-logo Spring Training caps are still for sale for $41.95 on the Padres' team website.