The Missing Piece: The healing power of hockey 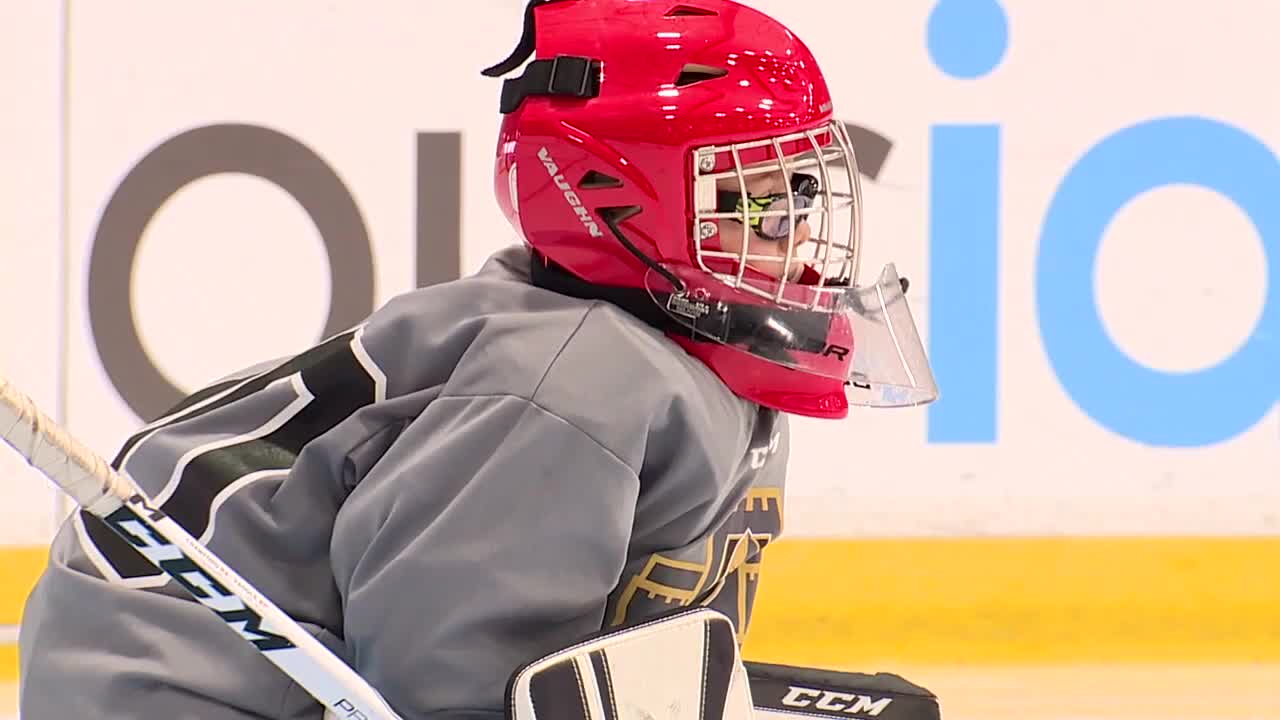 The healing power of hockey showcases a boy in bloom under the Vegas Golden Knights glow. A nine-year-old with autism whose journey Darcy Spears has been following for a year and a half. It's one that's evolved from a world of challenges to one of hope, possibility and determination. 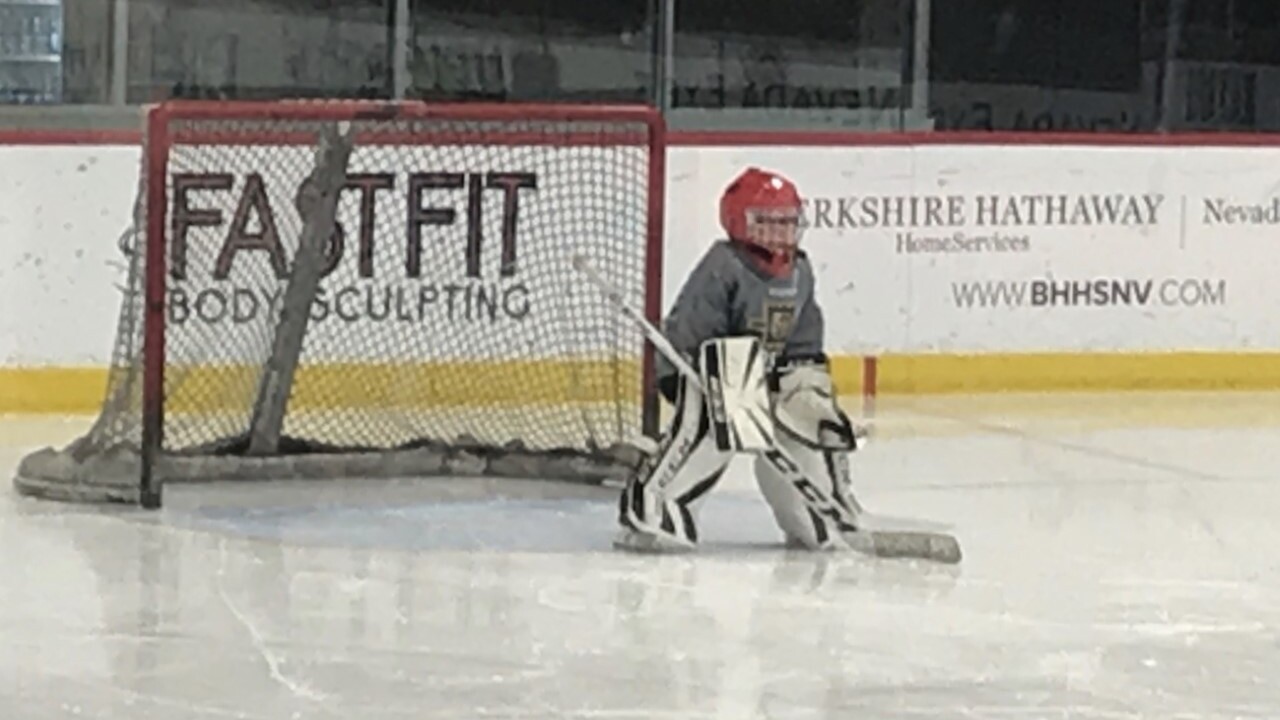 LAS VEGAS (KTNV) — It seems like an ordinary youth hockey game, but you'd never know the kid between the pipes is the same boy we first met in the spring of 2018.

Then a shy and quiet 8-year-old whose parents were struggling to get a grip on his autism diagnosis.

"I think for me the hardest thing to accept is that he just doesn't connect the way other people do," Jacquie Patton told us last year.

When he discovered hockey, Ozzie Patton found a connection --- a missing piece that started to completed his puzzling young life.

"Hockey's really just changed my life, my personality of how I am," now nine-year-old Ozzie says, speaking with much more confidence than he used to exhibit. "I used to be this kid that just wanted to do something. And the first time I watched a hockey game I was fascinated by it."

That was the Golden Knights' inaugural season.

A time when Ozzie's dad, then-detective, now Las Vegas police Sgt. Joe Patton, was working round the clock with his squad in the wake of the 1 October tragedy.

Once Ozzie attended his first game at T-Mobile arena, "I said that's cool. That's amazing. And when I first went on the ice I was surprised and now here I am today playing hockey and I'm surprised still."

Surprised, and, did I mention, humble?

"I never really thought I was gonna be that good," Ozzie says.

But Ozzie is that good. And he found his niche in the net.

"You guys interviewed me the last time -- I was just first skating."

Now he's not only skating, he's saving goals and thriving in a whole new world of opportunity.

To say that hockey's taken over the Patton family's life is a bit of an understatement.

Instead of cars in the garage there's a synthetic ice rink so Ozzie can get his hockey on any time.

He even has a private goalie coach, Brittney Brooks. Brooks worked with autistic children as a behavior therapist, then found Spectrum on Ice, which is how she met the Patton family.

The program caters to kids with autism and other developmental disabilities.

"I think that there's a big misconception out there that people with autism or kids with autism don't want to connect," Coach Brittney said. "I think that it's more they do--they just don't know how."

In a way, she says Ozzie's autism might be a benefit and a reason for his success in the rink.

"I think he's improved a lot faster than most kids his age because he's so focused."

She says his position as goalie, where he's literally behind a mask, lets him play in a way that's comfortable.

"And maybe at first he might have been a little overwhelmed around other kids, but more and more when he's making those saves, his teammates are going to come over and congratulate him and he's gonna really feel a part of something. But he still gets to have his own space and do it at his own pace."

"I love the ice time," Ozzie says. "I love playing hockey. But a lot of it is music too. I like listening to music. I like playing hockey with music."

He went to his first concert this summer to see his favorite band of brothers, AJR.

"He has really come out of his shell a lot," says Jacquie. "He's talking to people. He's initiating conversations, which really never happened before."

Mom says the biggest surprise he delivered was joining his school's speech and debate club.

"And I said, 'This is speech and debate! Do you know what that is?' He's like 'Yeah, it's when you talk in front of people.' And I literally laughed out loud because I thought he was joking with me."

She attributes that to hockey too.

"Honestly I think it goes back to hockey because he told me that during the games when he's playing goalie he commentates the game. I could totally see him being like a sports broadcaster maybe some day."

Hockey's a lot of work, but for Ozzie it's his main form of play, too.

"When the Golden Knights first played I wanted all of their pucks," he says as he proudly pulls out his prized possessions.

You won't find toys in Ozzie's room. This nine-year-old's playthings are kept in cases to be showcased and treasured.

"I didn't even know I was going to get this one until my birthday," he says as he displays a favorite puck.

He pulls out a purple and white puck, explaining, "My grandfather was serving for the military. And he retired. And he had lung cancer. And I put his name on it to remember him. And it was one of my favorite pucks."

The sport has grown his imagination and coordination to the point where he no longer needs occupational therapy.

"After his evaluation the therapist said 'Honestly, I think hockey just did everything that I would've been doing.' " Jacquie said.

And the new ability to connect is bringing the family close in a way they didn't think would be possible under the shadow of autism.

"He's found something that he loves. That we've all learned to love," Jacquie says with a smile. "I learned to skate because he learned to skate. So we can go skating together. I'm actually going to learn to play!" She breaks off, laughing, hoping she can keep up with her little boy, who will be the perfect coach.