UPDATE: Interstate 15 open in both directions in California

Interstate 15 in California has reopened after being closed overnight because of heavy snowfall in Mountain Pass and Cajon Pass. 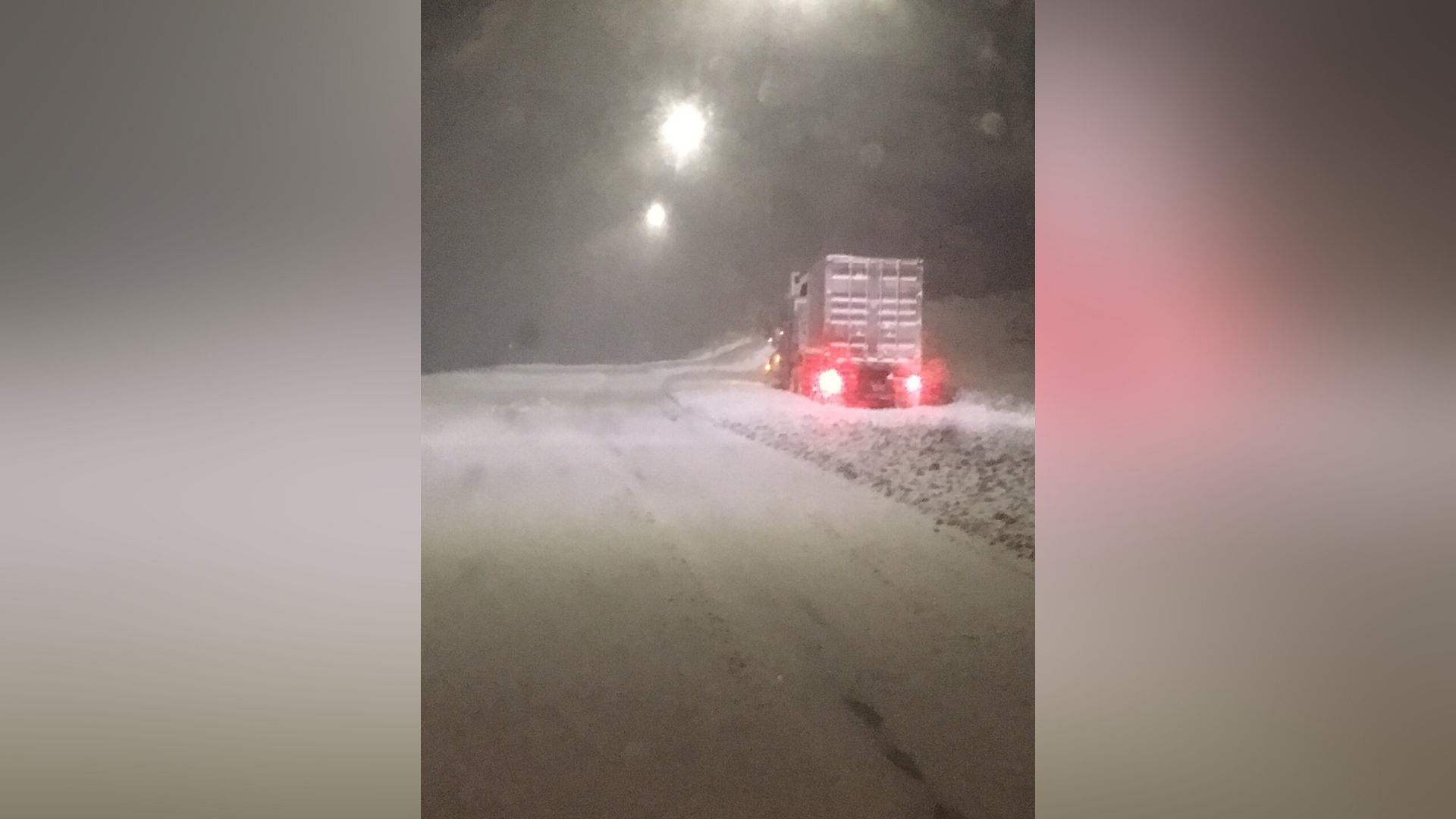 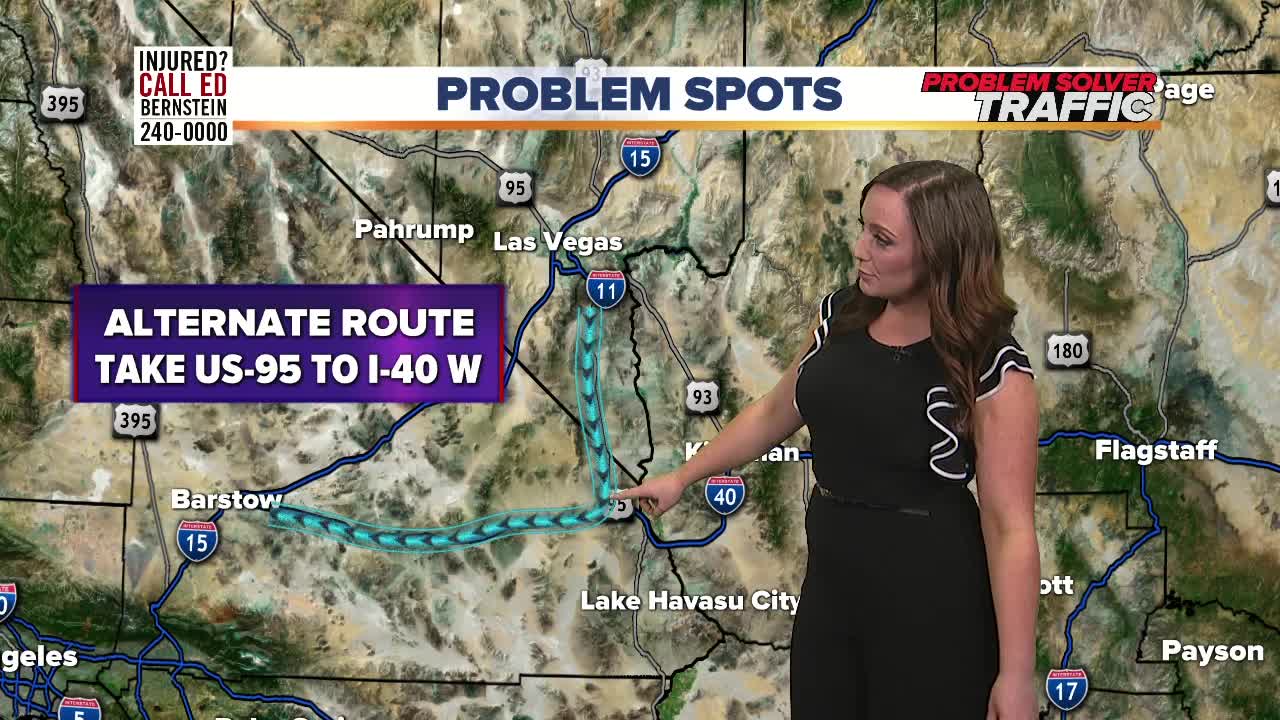 I-15 is now fully open at Mountain Pass between Baker and Primm. Both directions open. Enjoy and be safe everyone. Thank you for your patience.

UPDATE: I-15 Southbound is finally open, 19 hours after closing at the state line.
Crews are letting trapped drivers out first, then opening the flood gates. pic.twitter.com/9CHVUXLY5O

Update directly from CHP: 15 NB is now open on California side. 15SB will be open in an estimated 30 minutes.

UPDATE: I-15 Southbound is finally open, 19 hours after closing at the state line.
Crews are letting trapped drivers out first, then opening the flood gates. pic.twitter.com/9CHVUXLY5O

UPDATE 5:45 A.M. DEC. 27: CalTrans says that Interstate 15 is now open through the Cajon Pass. However, they are advising drivers that the interstate is still icy at the top and drivers should stay off of it until the sun can burn off some of the ice.

I-15 remains closed in both directions at stateline. Unknown duration. Crews working to remove 3 feet of snow and ice. https://t.co/vShgAfAOrb

UPDATE: People have been trapped in Primm for hours because I-15 is closed between Primm and Baker.
Snow and ice.
Do NOT come this way. pic.twitter.com/XZSFpbgGRC

Primm is a mess this morning- lots of travelers stuck due to wintry road conditions. We don't know when I-15 S will be back open, so if you need to get to CA from LV you can take the US 95 S to I-40 W. pic.twitter.com/HyNyjOmMst

UPDATE DEC. 27 AT 12 A.M.: After closures that lasted all night Thursday, Interstate 15 remains closed near Primm due to extreme weather. Officials say they are not sure how long the closures will last.

The closures began early Thursday and the I-15 re-opened for a short amount of time before closing again.

UPDATE DEC. 26 AT 9:30 P.M. Interstate 15 remains closed at stateline due to "extreme snow and ice conditions," according to California Department of Transportation. The agency shared some updated photographs of the area on Twitter shortly before 9:30 p.m.

More pics on 15 at Stateline. pic.twitter.com/HoyS39cY1I

I-15 still closed in both directions from Baker to Primm at Stateline. Extreme snow and ice conditions. Unknown duration. pic.twitter.com/AlVK1bVtiF

UPDATE DEC. 26 AT 7:30 P.M. Interstate 15 near Primm remains closed due to weather. The last update from authorities was at 6:12 p.m. from the Regional Transportation Commission of Southern Nevada. The RTC said on Twitter:

I-15 South Remains Closed in Primm, NV (California State Line) due to Snow Storm
Major Delays, use other routes

Blue Diamond Road between Las Vegas and Pahrump, however, is open after temporarily closing on Thursday due to weather. READ MORE

We’re all pretty excited about the snow, but we’ll have to wait- the Scenic Drive will have a delayed opening of at least 9am 12/27 to make sure the roads are safe for visitors

UPDATE DEC. 26 AT 5 P.M. Nevada Department of Transportation and Nevada Highway Patrol are warning drivers to expect delays on I-15 southbound towards California following the road closures at Primm (at the Calif. state line).

UPDATE DEC. 26 AT 4 P.M. CalTrans says is reporting that Interstate 15 is closed in both directions between Baker and Primm due to ice and accidents. Duration of closure is unknown.

I-15 at Mountain Pass is NOW CLOSED IN BOTH DIRECTIONS FROM BAKER TO PRIMM DUE TO ICE AND ACCIDENTS. UNKNOWN DURATION. AVOID TRAVEL TO AND FROM VEGAS UNTIL FURTHER NOTICE!

The westbound lanes of State Route 164/Nipton Road are also closed. Expect a long delay or use other routes.

UPDATE DEC. 26 AT 3 P.M. All lanes are now open on Interstate 15 through the Cajon Pass in California. Drivers can expect icy conditions and delays.

All lanes are open on I-15 in Mountain Pass at Primm to Nevada. Expect icy conditions and more closures if too icy.

UPDATE DEC. 26 AT 2:30 P.M. Route 160 between Pahrump and Nevada has reopened, but the driving conditions are still poor.

UPDATE DEC. 26 AT 1 P.M. Nevada Highway Patrol says that the southbound lanes of Interstate 15 in Primm has reopened.

Mount Charleston says that the Spring Mountains Visitor Gateway is closed for the rest of the day because of dangerous road conditions and low visibility.

Due to dangerous road and visibility conditions, the Spring Mountains Visitor Gateway is closed for the rest of today. pic.twitter.com/GT9IKJNvzQ

UPDATE DEC. 26 AT 12:24 P.M. Red Rock Canyon National Conservation Area has announced it will not be reopening the Scenic Drive today.

UPDATE DEC. 26 AT 11:50 A.M. Mount Charleston is advising potential visitors that today is NOT a good day to visit the mountain.

Expect closures on the I-15 in Primm to last most of the day. CHP is responding to numerous incidents and road closures. The good news is we have plenty of room for everyone to stay here in Las Vegas for a extra day. https://t.co/k5FdUo1kNC

UPDATE DEC. 26 AT 11:33 A.M. Route 160, which connects Las Vegas and Pahrump, is currently closed in both directions.

11:27 a.m.: So far, we’ve seen 1 snow plow headed up the hump to Pahrump
There is heavy snow just ahead of us. SR160 remains shutdown in both directions. @KTNV pic.twitter.com/N6LFcyNox9

UPDATE DEC. 26 AT 11:18 A.M. The Scenic Drive at Red Rock Canyon National Conservation Area has been temporarily closed because of snow and ice.

UPDATE DEC. 26 AT 10:45 A.M. CalTrans is reporting that the southbound lanes of Interstate 15 are now open through the Cajon Pass. The northbound lanes are still closed.

13 Action News Investigative Reporter Joe Bartels is currently checking out the conditions on State Route 160, the road that connects Las Vegas and Pahrump.

NOW: SR160 (BLUE DIAMOND) just to the west of SR159 (RED ROCK TURN OFF) is shut down! Snow is starting to fall where we are! This is the vital link between Las Vegas and Pahrump.@KTNV pic.twitter.com/9czC2IpGMX

The National Weather Service is advising motorists to avoid traveling today as much as possible.

Beautiful View of the Storm, Huh? 😍

⚠️AVOID TRAVEL today between Las Vegas and Southern California. ⚠️
Multiple road closures due to heavy snow & poor driving conditions along I-15 through Mountain Pass & Cajon Pass will last thru tomorrow AM. pic.twitter.com/xH8OcIJ3mQ

UPDATE DEC. 26 AT 9:30 A.M. Nevada Highway Patrol says that Interstate 15 southbound is closed once again at Primm due to snowy conditions in California. These off-and-on closures are likely to continue until the pass can be cleared.

UPDATE DEC. 26 AT 9 A.M. The winter weather is creating quite a mess in California and the mountains surrounding the Las Vegas valley.
The nationa

*UPDATE* Road Closed - I-15 southbound at Nevada/California stateline in Primm
Mountain Pass closed to Baker, California. Expect a long delay or use other routes. https://t.co/xDLCLYbPwy

UPDATE DEC. 26 AT 8:25 A.M. State Route 160 is now open, according to NDOT. However, they are telling motorists to expect delays.

Chains are currently required on several roads around the valley, including State Routes 156, 157, 158 and 160.

Visit https://t.co/oTcg7JbVsd for updates & DRIVE SAFE if you have to at all. pic.twitter.com/OYl0uYWxtP

UPDATE DEC. 26 AT 8:13 A.M. State Route 160 is closed in both directions between Red Rock Canyon and Mountain Springs, according to Nevada Department of Transportation.

ORIGINAL STORY
If you are traveling in Nevada and California today, it might be a bit of a tough go.

The California Department of Transportation closed Interstate 15 through Cajon Pass around 6 a.m. Thursday because of heavy snow.

Additionally, CalTrans is advising motorists that all vehicles on all mountain routes in San Bernardino and Riverside counties must have chains.

This is traumatizing. Even the police cannot help us. Freeway has been closed for 4 hours. It’s freezing out here. #CajonPass pic.twitter.com/lLvE5BoPEh

The Nevada Department of Transportation temporarily closed the southbound lanes of I-15 shortly after the announced closure of the interstate through the pass. However, the interstate has since reopened and traffic appears light at this time.

TRAVEL WARNING: on a day called the “worst travel day of the year,” bad weather in California is causing significant delays on I-15.
We’re heading south, and the billboards are already signaling the issues you’ll face. pic.twitter.com/rkDTyWndKA

The National Weather Service says motorists can also expect slick roads to the Spring Mountains today with 1 to 3 inches of snow possible between now and 10 p.m. A Winter Weather Advisory is in effect until 4 a.m. Friday.

13 Action News meteorologist Kelsey McFarland says that there is a small chance of rain in the Las Vegas valley today, with most models predicting a tenth of an inch of less.

Although there was no wind to speak of early Thursday morning, that will change throughout the day. We can expect winds between 6 and 11 mph this morning and gusts up to 20 to 25 mph in the afternoon. Today's high temperatures are expected to be in the upper 40s and lower 50s.

Temps will drop into the 30s tonight.

No rain is expected at this time for Friday and Saturday.