The bad side of Las Vegas politics: Battle over Badlands

The words and actions of two Las Vegas City Council members and the silence of the rest have some wondering whether our local government leaders can be fair when doing the public's business. Allegations of bias, prejudice, collusion and corruption are costing taxpayers millions in a case that puts the ugly side of politics on full display.

Badlands might be the most aptly named piece of property in Las Vegas. There's a vicious battle raging over the defunct golf course in Queensridge, one of the valley's most exclusive communities.

"You've never seen anything like this before in the history of the City of Las Vegas. There's never been a project like this that has been more mishandled, that has been the subject of more government abuse than this project," according to Lowie's attorney, Lieutenant Governor Mark Hutchison.

Developer Yohan Lowie owns the land in question which is zoned for residential development.

"It is so hard to believe what's happening here," Lowie told us.

It's also hard to believe what's being said about Lowie as he's come before the council seeking permission to develop Badlands. In profanity-laced emails and text messages obtained by Lowie's attorney through a public records request, Councilman Bob Coffin uses expletives to describe Lowie.

In one message he calls him "scum" and asks if there's "intel" on him. He writes, "Dirt will be handy if I need to get rough." In another text, he calls Lowie a "crazy Israeli." 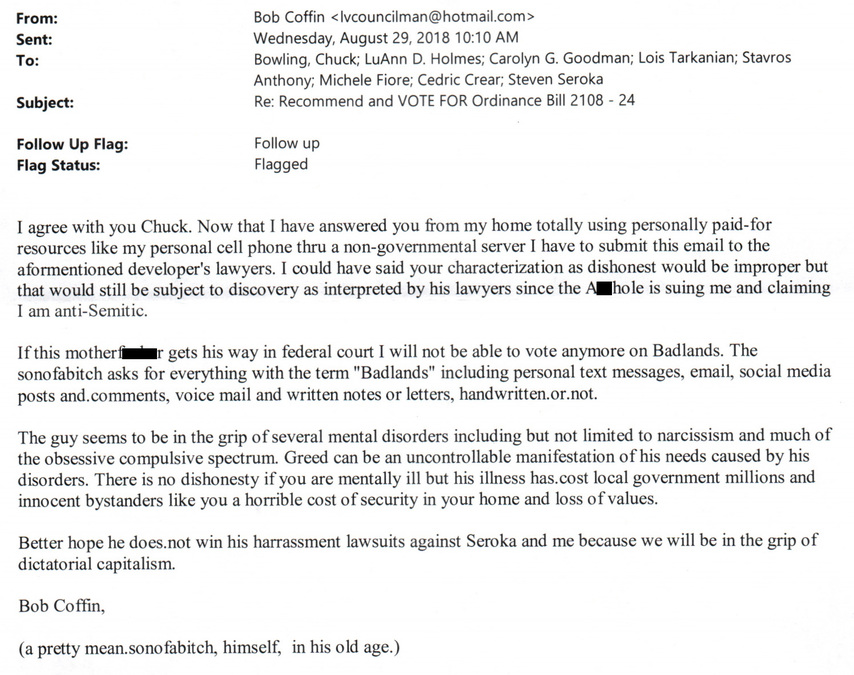 "The bias and the prejudice and the animosity that was expressed in those emails alone is troubling," Hutchison said.

"You have rights, but you've got to stop treating these people like a bunch of unruly Palestinians getting thrown--you know--a concrete block settlement thrown into their land right there," Coffin said at a City Council meeting.

What Coffin equates to a concrete block settlement are Lowie's development plans, which include high-end mega estates with huge lots, trees, ponds and walking trails. All on a golf course that's now defunct. Something the County Assessor determined would convert the property to a "higher use."

At least one councilperson has expressed some approval.

"I want to tell you I don't think Yohan is an ogre. I think he's a brilliant designer," said Mayor Pro-Tem Lois Tarkanian.

But he and Hutchison claim council members including Coffin and Steve Seroka are the roadblocks, acting on behalf of the wealthiest and most powerful people in Queensridge. It's a neighborhood that includes a veritable who's who of gaming industry magnates, people who don't want the property developed even though it's zoned for just that.

"Over my dead body will I allow a project that will set a precedent that will ripple across the community that those property values do not just be impacted in Queensridge, but throughout the community. I ask you to find that moral courage to stand up," Seroka said at a hearing before the City Planning Commission.

WATCH: Comments about Badlands made by Seroka, Coffin, Tarkanian and Fiore at meetings.

The case landed in federal court where Seroka admits he was, "motivated to run for City Council due to my concern over how the City was handling the Badlands project." but says all his votes on the matter have been because he "personally believed it was the right thing to do," adding he had his "constituency and community in mind."

Lowie's lawsuit seeks to disqualify Coffin and Seroka from voting on an ordinance that Councilwoman Michelle Fiore has dubbed "The Yohan Lowie Bill." Sponsored by Seroka, it would amend city code regarding "repurposing of certain golf courses and open spaces."

Lowie's team says if the ordinance passes, he'd be hamstrung.

The proposal claims it's a "comprehensive approach to dealing with open space issues," but Lowe's team believes there's something more sinister going on.

A city document shows plans for potential proceeds from an unrelated lawsuit. On page 3 of the list is a $15 million dollar line item for the city to "purchase and operate Badlands." We asked the city about that but not a single councilperson including the mayor would speak with us, citing the ongoing litigation.

"This demonstrates that this particular project, and now potential projects across the valley, is subject to government abuse, government conspiracy with people in high places and deep pockets.  I think that the public ought to be very concerned whether or not the City Council is acting in the public's best interests or a handful of wealthy individuals' best interests," according to Hutchison.

Councilwoman Fiore expressed a concern in January. "I would like an accounting of the last two years on taxpayers' dollars of how much money we have literally spent having our chambers be a courtroom for the richest men in Las Vegas."

In just city staff time, it's nearly half a million tax dollars. Hutchison said it's in the millions when you factory in the outside lawyers the city has hired.

There's something else in those controversial Bob Coffin emails. Writing to Queensridge homeowners, Coffin tells them not to sue the word Badlands in the title or text, which would help hide their communications from public records searches. He also says to "not use the city email address but call or write to our personal addresses."

Hutchison says, "Bob Coffin has made very clear from his emails that he wants to do business in the shadows and keep it as quiet from the public as he can."

In court documents, both Coffin and Seroka deny having any bias or prejudice. Though Coffin admits using "rather colorful language regarding Lowie." As for keeping his communications private he says he's not trying to "undermine the transparency of government workings" but for safety reasons he should be able to keep citizens' concerns private.

Just yesterday, a federal judge ruled in favor of Coffin and Seroka's right to vote on the open space ordinance, saying to prevent that would interfere with the process of democratic government.  A district court decision supported the City's denials of Lowie's applications.  The battle is now headed to higher courts and taxpayers will continue to foot the bill.