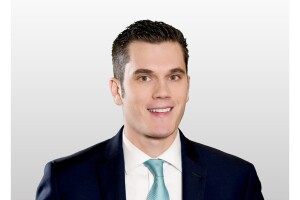 Tom George joined the 13 Action News team as a reporter in October 2016.

He comes to Las Vegas from Oklahoma City where he spent two years reporting for KOKH-TV. While in Oklahoma, he covered everything from tornadoes to a high profile rape case involving an OKC police officer.

Prior to that, he began his career down south as a reporter and fill-in anchor for another "13" station at WMAZ-TV in Macon, Georgia.

om is a proud Terp. He graduated in 2012 from the University of Maryland's Philip Merrill College of Journalism with a major in Broadcast Journalism and a minor in Spanish. While at UMD, he interned for both WRC-TV and NBC News in Washington, DC, and his reporting for UMD's CNS-TV won national recognition.

Tom also enjoys traveling. He spent a few years as a child living in England, and studied abroad in Barcelona, Spain.