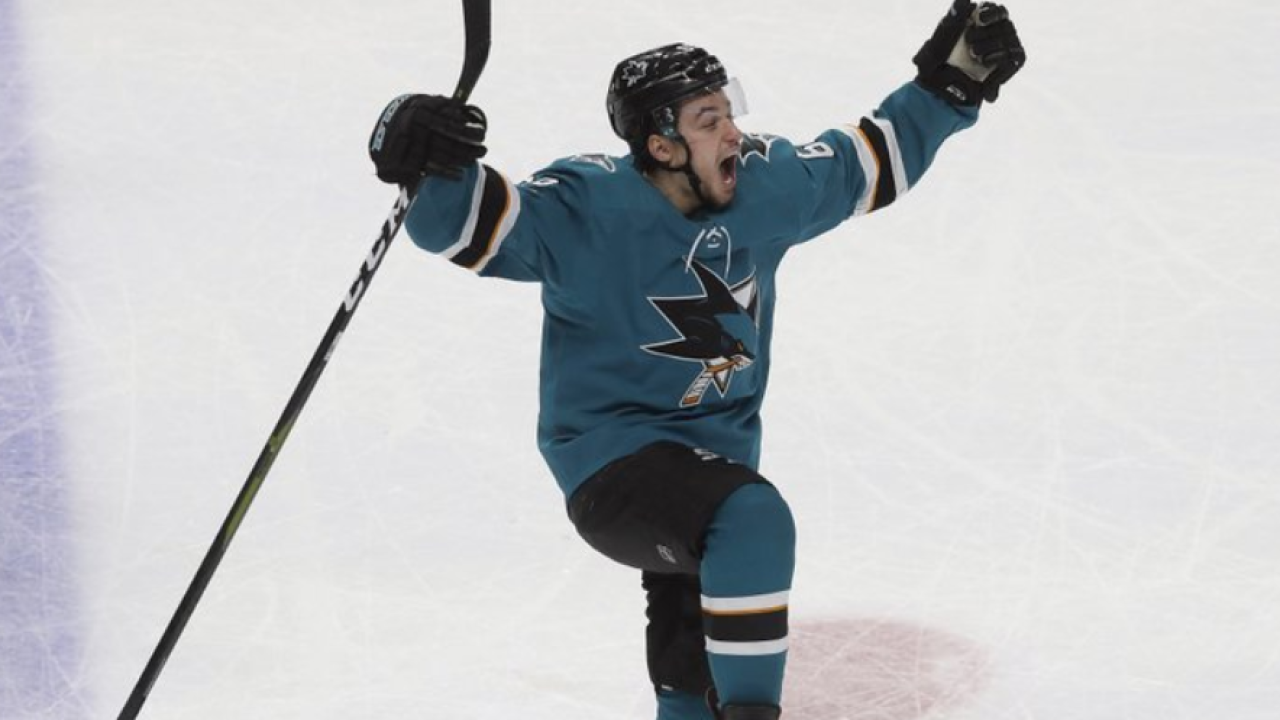 SAN JOSE (AP) — Barclay Goodrow scored 18:19 into overtime to send San Jose into the second round of the playoffs with a 5-4 win Tuesday night, capping a wild Game 7 that featured the Sharks erasing a three-goal deficit by scoring four times on a disputed major penalty in the third period and Vegas tying the game in the final minute of regulation.

What looked like was going to be a relatively easy Vegas win turned crazy with 10:47 to play in regulation after a bloody scene on the ice led to a major penalty on Cody Eakin and sent San Jose captain Joe Pavelski to the locker room dazed.

The penalty happened on a faceoff in San Jose’s offensive zone when Eakin cross-checked Pavelski in the chest. Paul Stastny then hit Pavelski as he fell to the ice, his helmet slamming down. Pavelski appeared to be knocked out and blood poured out of his mouth that was already injured after taking a puck to the face while scoring a goal in Game 1.

The officials huddled as a dazed Pavelski was helped to the locker room and gave Eakin a five-minute major for cross-checking and a game misconduct.

The Sharks then rallied behind their captain thanks to two goals from Logan Couture, one from Tomas Hertl and then the tiebreaker from Kevin Labanc, who assisted on the first three goals. That scoring spree in 4:01 against Marc-Andre Fleury sent the fans at the Shark Tank so used to playoff disappointment into delirium. It marked just the second time a team had scored four goals on one major power play in a playoff game.

Martin Jones then appeared ready to seal the win, robbing Mark Stone with a glove save with 3:10 to go and Vegas on the power play. But the Golden Knights didn’t go away and got the equalizer with Fleury pulled in the final minute.

William Karlsson, who scored the first goal, leaped at the blue line to keep a puck in the zone and then Reilly Smith ended up with it behind the net where he set up Jonathan Marchessault to make it 4-4 and set up overtime. It was the third-latest tying goal in a Game 7 in NHL history.

Fourth-liner Goodrow delivered late in the extra period, taking a pass from Erik Karlsson and deking his way past Fleury for the game-winner that set off a wild celebration.

Eakin and Max Pacioretty also scored for Vegas and Fleury made 43 saves.

Jones, who was pulled for ineffectiveness in two of the first five games, made 34 saves to close out the series and give the Sharks their first comeback from 3-1 down in a series in seven tries.

San Jose will face Colorado in the Western Conference semifinals.

The Shark Tank was rocking from the opening introductions as the fans came out hoping to witness the completion of the best series comeback in franchise history. The Sharks rode that momentum to a strong start but came up empty on two early power plays.

Than in a reversal from Game 6 when Vegas controlled the shot clock but the Sharks came out as winners, the Golden Knights struck first midway through the period after San Jose was called for icing. William Karlsson won the offensive zone draw and Reilly Smith shot a puck toward the net that was deflected and went right to Karlsson, who swept it past Jones to make it 1-0.

That appeared to be a good omen for Vegas considering the team that scored first won the first six games of the series and there wasn’t even a single lead change during that time.

The Golden Knights built on that lead and led 3-0 early in the third when everything changed with the penalty.

The season may be over. But the #GoldenKnights are #Vegas and they are OUR team. We are #VegasBorn. This may hurt right now but next season is ours. #GoKnightsGo pic.twitter.com/Xgy8WhAeyY