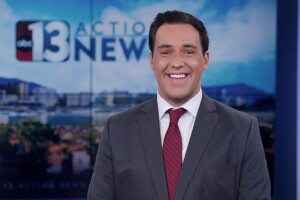 Ross was born and raised in the Boston area, where his love of local news and sports started. After high school, Ross studied journalism at Temple University in Philadelphia, graduating with his degree in 2014 while working part-time at the CBS news radio station, KYW 1060.

Ross got his start in the T.V. news business in Elmira, N.Y., where he won Associated Press awards for his regular anchoring on "Good Morning Twin Tiers," and his continuing coverage of the 3rd and 4th Cal Harris murder trials, which made national headlines. Ross' reporting on the trials was later featured on the network shows, "20/20" & "Dateline."

Ross then took a position as weekend anchor/reporter at the ABC affiliate in Fort Myers, FL, where he reported on the frontline of environmental disasters like Hurricane Irma and harmful algal blooms that wreaked havoc along the Gulf coast. He also reported extensively on education, including fallout from the Parkland school shooting.

Ross comes to Las Vegas with his fiancé, Tanya, and his Bernese Mountain Dog, Phil. They are extremely excited to experience the endless entertainment and activities that the valley has to offer, especially Vegas Golden Knights games and hiking Mt. Charleston. Ross is always looking for ways to connect with the community, so feel free to reach out to him anytime about anything, especially story ideas, via e-mail or on social media!