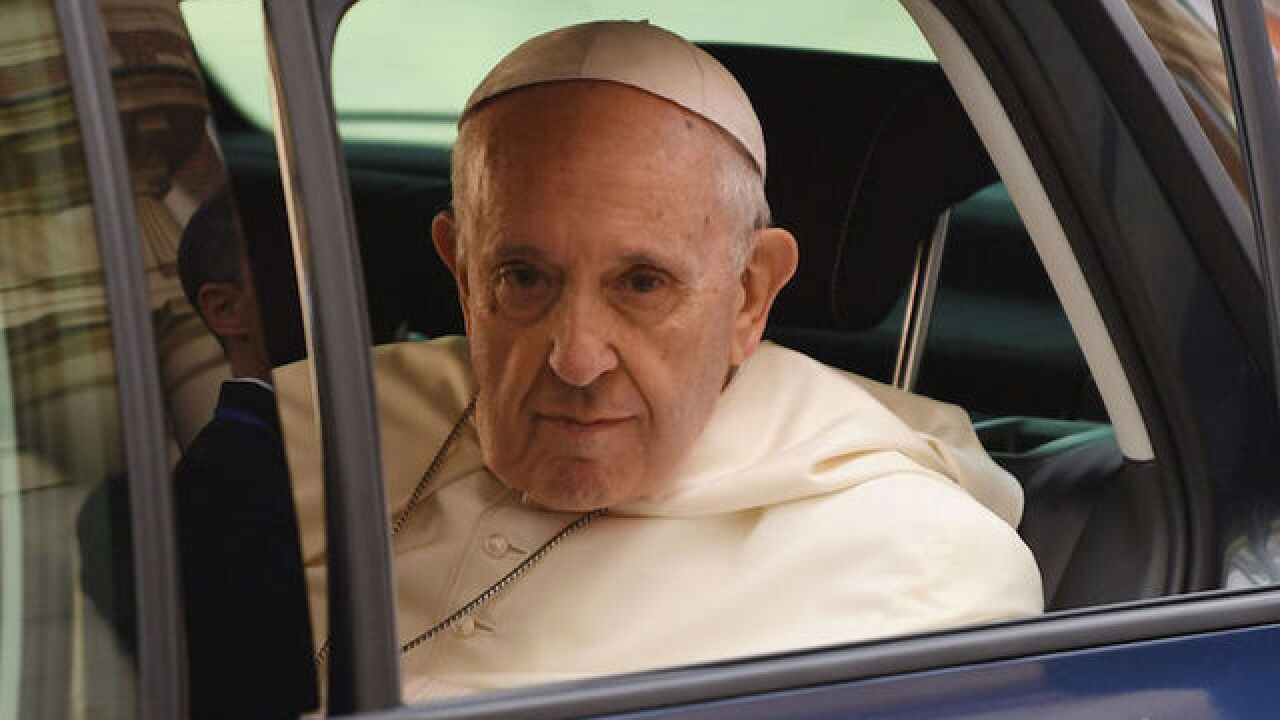 Image copyright 2018 Getty Images. All rights reserved. This material may not be published, broadcast, rewritten, or redistributed.
Jeff J Mitchell
<p>Pope Francis arrives to meet dignitaries at Dublin Castle on August 25, 2018 in Dublin, Ireland. Pope Francis is the 266th Catholic Pope and current sovereign of the Vatican. </p>

Pope Francis has spoken during his visit to Ireland of his shame over the "appalling crimes" of historic child abuse in the Catholic Church and said outrage was justified.

However, he failed to specifically mention the current scandal raging over a US grand jury report documenting at least 1,000 cases of clerical pedophilia.

Speaking to a hall in Dublin Castle packed with hundreds of political and religious dignitaries and foreign diplomats, Pope Francis said on Saturday "the failure of ecclesiastical authorities -- bishops, religious superiors, priests and others -- adequately to address these appalling crimes has rightly given rise to outrage, and remains a source of pain and shame for the Catholic community. I myself share those sentiments."

Ireland's Prime Minister Leo Varadkar, who spoke before the Pope, did not skirt the current abuse revelations and called for "zero tolerance" of Church sexual abuse and asked the Pope "to adopt stringent norms meant to ensure that they do not happen again."

It is the first Papal visit to Ireland in 39 years, a country that has undergone seismic social changes in that time.

"Wounds are still open and there is much to be done to bring about justice and truth and healing for victims and survivors. Holy Father, I ask that you use your office and influence to ensure that this is done here in Ireland and across the world," Varadkar said standing next to the pontiff. "We must now ensure that from words flow actions," he said.

The Argentinian Pope remains highly popular in Ireland and tens of thousands of people are expected at Dublin's Croke Park stadium Saturday evening for a concert-style event.

Hundreds of thousands more will attend a Mass celebrated by the Pope at the city's Phoenix Park on Sunday afternoon, with all 500,000 tickets for the free event booked out.

However, Pope Francis is also expected to face unprecedented protests over the Catholic Church's handling of the clerical abuse scandal. One, dubbed "Stand for Truth," will take place at the Garden of Remembrance in Dublin's Parnell Square at the same time as the Mass is celebrated.

Some protesters also say they have booked tickets to the event in Phoenix Park but will deliberately not use them as a form of silent protest against the Catholic Church and its actions. Organizers of the "Say Nope to the Pope" protest said on Facebook they hoped to show solidarity to abuse victims and "show the Church they don't have the control they used to."

On Tuesday the grand jury in Pennsylvania issued a report that 300 Catholic priests across the US state sexually abused children over seven decades, protected by church leaders.

The investigation, one of the broadest inquiries into church sex abuse in American history, identified 1,000 child victims, but said there were likely thousands more.

"Priests were raping little boys and girls, and the men of God who were responsible for them not only did nothing; they hid it all," the grand jury wrote.

Amid rising international outrage, the Vatican confirmed this week that the Pope would meet privately with victims of clerical sexual abuse in Ireland during his visit to the country. It has not said where or when that meeting will take place.

It is also "very possible" that the Pope will publicly address the topic of abuse during his visit, Vatican spokesman Greg Burke told reporters.

Burke added that the pontiff would pray at St. Mary's Pro Cathedral in Dublin on Saturday, where a candle has burned for years in remembrance of the country's victims of sexual abuse.

On Sunday morning, he will make a pilgrimage to the Shrine of Our Lady of Knock in County Mayo, more than 100 miles west of Dublin, where he will lead prayers for families around the world. All 45,000 tickets for this event are also booked out.

The last papal visit to Ireland was by Pope John Paul II in September 1979. More than a million people gathered for the papal Mass in Phoenix Park on that occasion, according to the Irish Times, representing about a third of the country's population at the time.

On Monday, Francis acknowledged "with shame and repentance" the Catholic Church's failure to act over clerical abuse. In an unusually blunt letter, he wrote: "We showed no care for the little ones; we abandoned them."

The letter directly referred to the Pennsylvania report, which "detailed the experiences of at least 1,000 survivors, victims of sexual abuse, the abuse of power and of conscience at the hands of priests over a period of approximately 70 years," the Pope wrote.

Meanwhile, memories of Ireland's own abuse scandal are still vivid. And survivors have been critical of Francis' response so far.

Colm O'Gorman, an abuse survivor who is now executive director of Amnesty International Ireland, is behind the Stand for Truth protest.

He told CNN that the Vatican's announcement this week had created a "soap opera" in Ireland, with members of the media repeatedly calling survivors to ask whether they had been granted an audience with the pontiff.

"What I would like to see when the Pope comes to Ireland, is to come out, not make these sort of 'we're sorry,' type of statements, but to tell us what is he going to do -- and do it," Collins, who was assaulted by a priest when she was 13, told CNN.

"And it must be something concrete."

In 2009, the Dublin Archdiocese Commission of Investigation released a 720-page report that said that it had "no doubt that clerical child sexual abuse was covered up" from January 1975 to May 2004, the time covered by the report. The commission had been set up in 2006 to look into allegations of child sexual abuse made against clergy in the Irish capital.

The report named 11 priests who had pleaded guilty to or were convicted of sexual assaults on children. Of the other 35, it gave pseudonyms to 33 of them and redacted the names of two.