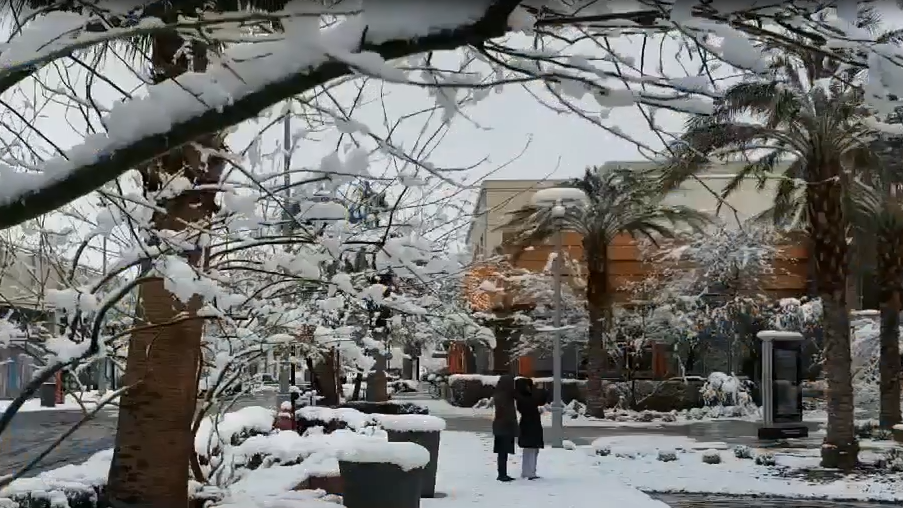 The recent snowfall made Downtown Summerlin a Winter Wonderland. 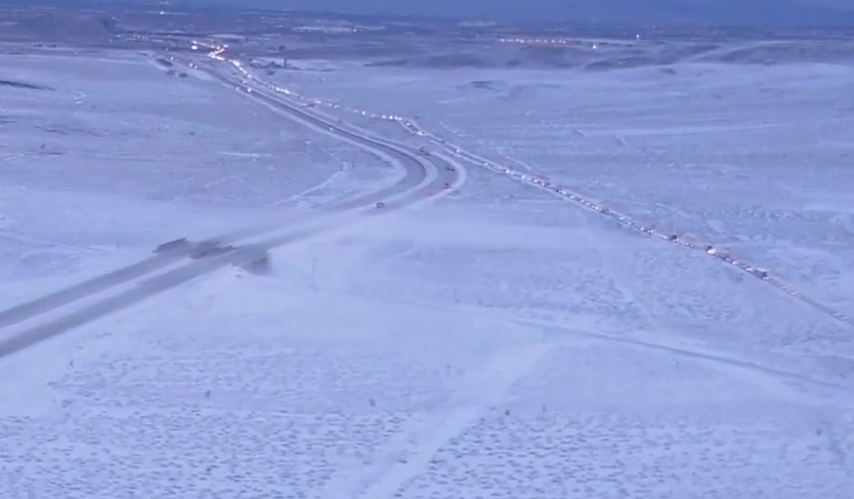 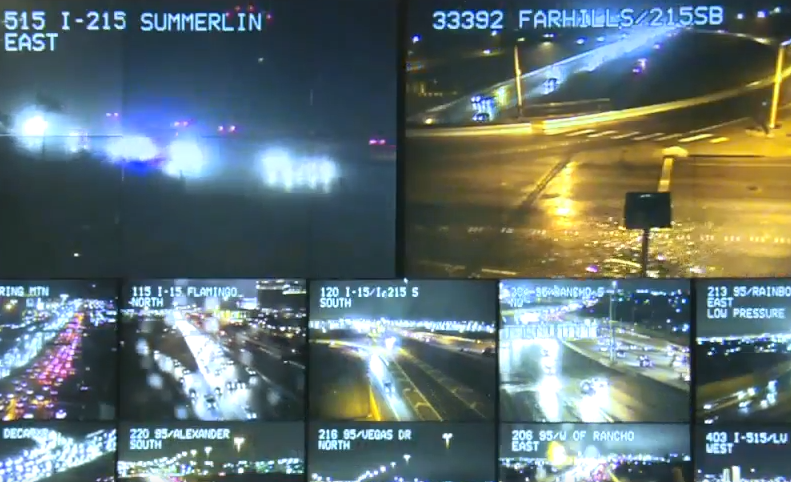 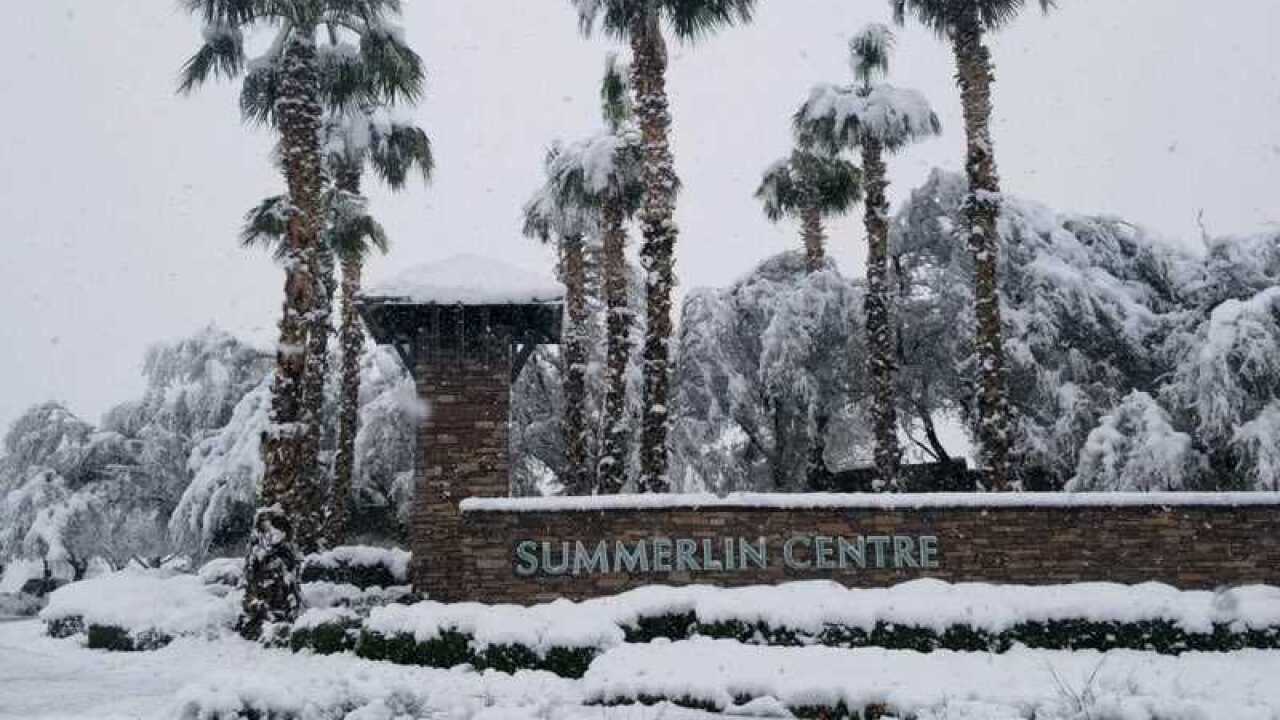 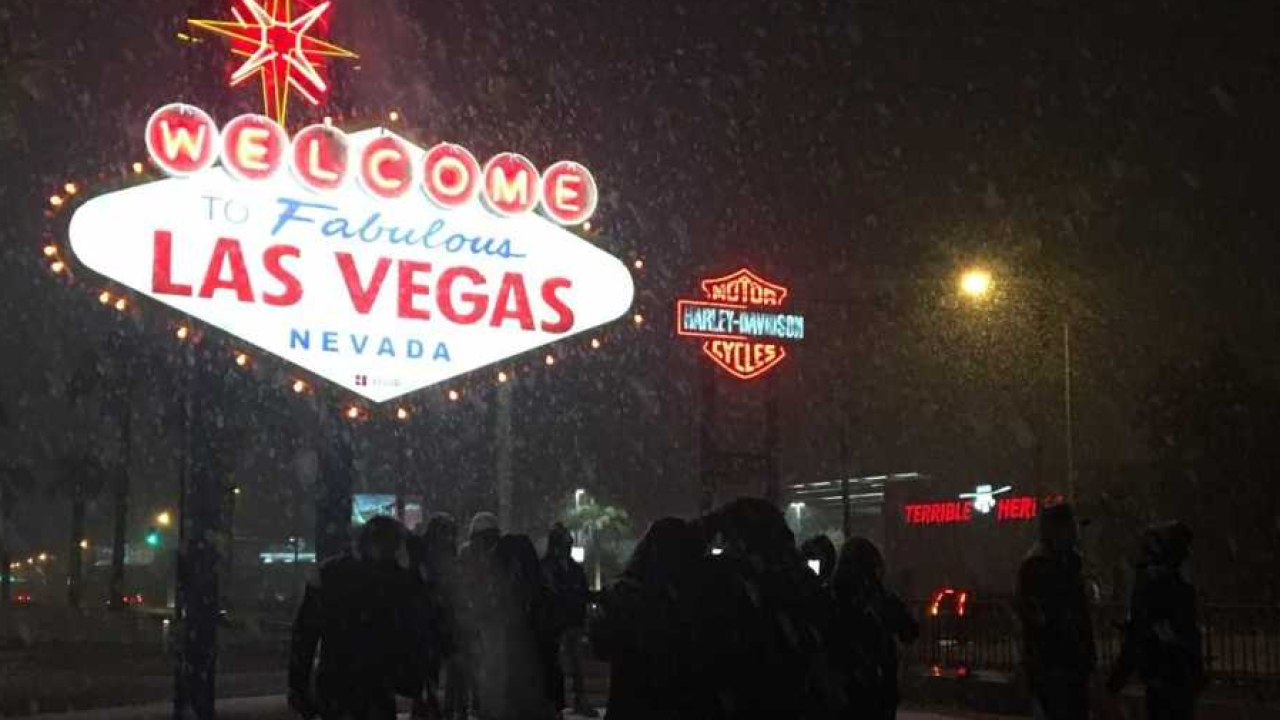 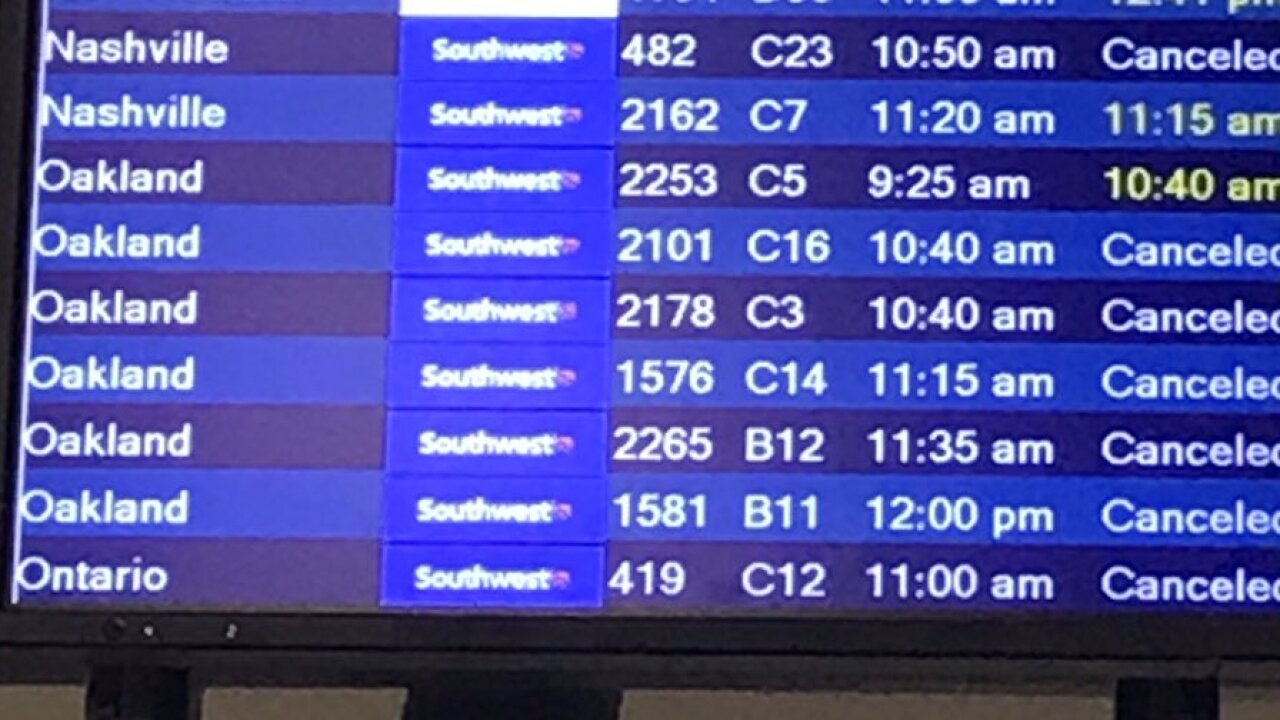 LAS VEGAS (KTNV) — UPDATE FEB. 21 9:30 P.M.: Southbound I-15 was closed at Primm due to snow and ice conditions in Southern California, according to the Nevada Department of Transportation.

*UPDATE* Road Closed - I-15 southbound at Primm
Hazardous roads due to snow and ice in Southern California. Expect delays and avoid the area. https://t.co/xDLCLYbPwy

UPDATE FEB. 21 8 P.M.: Clark County urged drivers to be especially cautious Thursday night through 9 a.m. Friday due to the effects of the winter storm. Drivers should be careful over bridges and overpasses, which may be coated with ice, according to the county.

Clark County is urging drivers to be especially cautious Thursday night through 9 a.m. Friday as we continue to feel the effects of the winter storm. Drivers should be particularly cautious over bridges & overpasses, which may be coated with ice #Vegas #VegasSnow @ClarkCountyFD pic.twitter.com/y9EGSVFA8t

UPDATE FEB. 21 6 P.M.: The Nevada Highway Patrol reports between 5 a.m. and 6 p.m. troopers responded to 66 crashes - 12 of those with injuries and two were hit-and-runs. However, no life-threatening injuries reported. This number is above average compared to days with no weather factors, and is again expected to climb during the evening hours, according to NHP.

UPDATE FEB. 21 5:30 P.M.: The Clark County School District is canceling all school and after-school activities, including athletics and Safekey for Friday, Feb. 22 due to reports of potential freezing conditions on the roads that would be unsafe for school buses during the morning commute.

UPDATE FEB. 21 4:50 P.M.: The Nevada Highway Patrol reports between 5 a.m. and 4:50 p.m. troopers responded to 56 crashes - 10 of those with injuries, no life-threatening injuries. This number is above average compared to days with no weather factors, and it is expected to climb during the evening hours, according to NHP.

UPDATE FEB. 21 1:50 P.M.: At the direction of the Clark County School District, Safekey programs administered by the Clark County Parks and Recreation Department will be closing early today.

Authorities say parents should pick up their children by 3:30 p.m.

UPDATE FEB. 21 12:28 P.M.: The Las Vegas Rescue Mission says it is in urgent need or blankets and donation due to weather.

The organization says it will be distributing blankets at the community meal between 5 - 6 p.m.

Donations will be accepted at the security gate from now. until 8 p.m. The Las Vegas Rescue Mission is located at 480 W Bonanza Rd, Las Vegas, NV 89106.

UPDATE FEB. 21 12:28 P.M.: The Nevada Department of Transportation has closed State Route 164 near Nipton Road is closed in both directions at US-95 in Searchlight due to heavy weather conditions.

UPDATE FEB. 21 12:05 P.M.: The Nevada Department of Transportation has closed I-15 South at Primm due to snow, weather conditions.

This is the current roadway conditions on I-15 near Bailey Road. Be prepared for snow and ice as you head through the Mountain Pass area. Caltrans it out with plows and CHP units are making sure everyone takes it slow. pic.twitter.com/0lGxW9QrGp

This includes all evening education classes, athletics, and other school-sponsored events. CCSD cites "potential for freezing conditions on the roads" as the reason for the cancellations and says it "continues to work with the National Weather Service and the Clark County Emergency Manager to monitor the inclement weather."

UPDATE FEB. 21 11:21 A.M.: The Nevada Department of Transportation has closed I-11 South to Kingman, AZ due to heavy snow and vehicle backups. A suggested alternate route is U.S. Highway 95 to Interstate 40.

The airlines says, "Delta apologies to customers for the travel delay due to weather and are working diligently to get customers to their destinations as quickly and safely as possible."
De-icing operations are underway in Las Vegas and average delays are 60 minutes long, according to the airlines.

@SouthwestAir says more than 4000 flights are scheduled, but around 290 are canceled, & nearly 80 of those in #LasVegas pic.twitter.com/MTrpaYrAip

The Scenic Drive and Visitor Center will be closed this morning, but you can enjoy this snow from almost anywhere in Las Vegas right now! pic.twitter.com/BepCSA4GsF

UPDATE FEB. 21 6:20 A.M.: Here's a look at snow totals around the valley. Summerlin West receiving the most snow at 5"

Here's my list of snow totals through 6:00 a.m. Let me know if you've got a reliable measurement from your part of Las Vegas! https://t.co/vMVGM2gmQS pic.twitter.com/EO96fqCMmf

UPDATE FEB. 21 5:55 A.M.: University of Nevada, Las Vegas announced it is also operating on a normal schedule today, advising any students who are unable to get to class to contact their instructor.

UNLV is on normal schedule today. Please be safe and allow extra time for your commute.
Students who are unable to get to class should contact their instructor regarding making up class work.
Visit https://t.co/IeDE4RbAza for updates.

UPDATE FEB. 21 5:30 A.M.: The College of Southern Nevada announced that it will remain open today and hold classes at all locations, saying "the safety of our students, faculty and staff is a priority. Please proceed to campus with caution."

The College of Southern Nevada will remain open today and hold classes at all locations. The safety of our students, faculty and staff is a priority. Please proceed to campus with caution.

LAS VEGAS (KTNV) - A Winter Weather Advisory has been issued by the National Weather Service for the Las Vegas valley starting Wednesday night.

The weather service has issued the warning effective from 6 p.m. Wednesday to 4 a.m. Friday.

Snow is expected with accumulation up to 3 inches expected along the western and southern outskirts of the valley, according to the NWS.

RELATED: Nevada Department of Transportation preparing for next big storm

Las Vegas Fire and Rescue is also warning that the cold temperatures and snow can cause the possibility of property damage along with personal injury.

Nighttime temperatures will be at or near freezing and those low temps can cause any wet spots on the ground to become frozen and slippery.

Exposed water pipes could also be damaged by freezing water inside, causing leaks once the water begins to melt, according to Las Vegas fire.

It’s really cold this morning in @CityOfLasVegas. If using a space heater to get ready for work/school, make sure to unplug it before you leave & make sure nothing is around it. Make sure the stove is OFF on the way out too. Dress warmly, it’s freezing in some neighborhoods. pic.twitter.com/LQpvX4TQhI

Las Vegas fire also said as a reminder that pets should be brought inside and not exposed to the cold air for extended periods.

The National Weather Service updated the snowfall was already between a half inch and 1-inch in the west part of town above 2500 feet just before 7:30 p.m.

With most of the roads wet and temperatures west of the 215 Beltway approaching the freezing mark.

720 PM Getting reports of snow accumulations between half an inch and 1 inch across the western valley above 2500 feet. Most of the roads are still wet, but temperatures west of the 215 are approaching the freezing mark. Drive Carefully. #vegas #VegasWeather #nvwx

Also, the Nevada Highway Patrol also reported road closures were in place on Nevada State Route 160 due to the snowfall.

#trafficalert SR160 is closed in both directions due to heavy snowfall. There are multiple vehicles off the roadway. NDOT is plowing at this time but it’s unknown when and if the SR160 will reopen. Check back for updates. #snow #roadclosures #drivesafenv #nhpsocomm

The Regional Transportation Commission of Southern Nevada said that transit customers should prepare for delays due to the weather, but crews will also be working hard to keep traffic flowing with updates on social media .

Nellis Air Force Base will also be closed on Thursday due to the weather, according to a statement, with only mission essential personnel reporting for work as scheduled.