Bands are expected to continue to hit the stage at AlienStock with a little more people in attendance over the weekend, but the initial turnout has been less than anticipated. 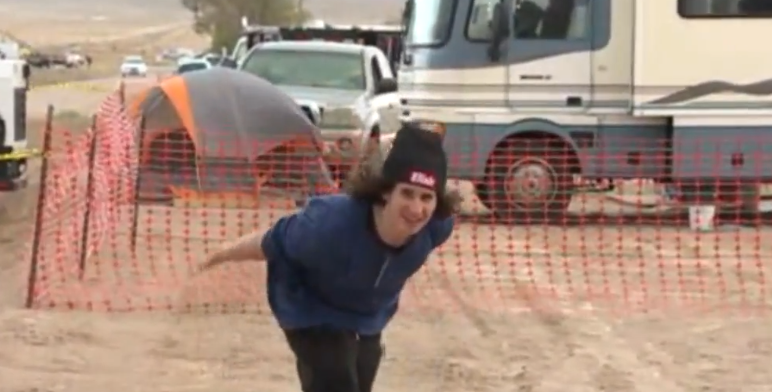 UPDATE SEPT. 20: The viral social media event "Storm Area 51" has seen less than expected crowds at the beginning of the planned festivities.

Overnight temperatures were in the 30s and 40s that caught a lot of revelers off guard, and the winds left many shivering on Thursday.

Authorities did arrest at least one person early Friday morning as they were preparing for an expected crowd of more than 30,000 people but said only a fraction have shown up as of Friday evening in Rachel, Nev.

Also, 13 Action News reporter Joe Bartels was trending nationwide after he was photobombed by a "Storm Area 51" attendee doing a Naruto run during his live report in Rachel, Nev.

Elia Elixir helped Bartels break the internet as he was visiting the area from California.

"I've been to this area before; I was practicing my Naruto Run. We packed up the car and wanted to catch some aliens," Elixir said.

The video was shared thousands of times since it was posted and reached more than 1.5 million views.

It all started with a Facebook joke that went viral.

Now there are two music festivals and a slew of parties inspired by the Storm Area 51 Facebook event. Here's a roundup of sights and sounds from the alien-themed happenings in Rachel, Hiko and around Las Vegas Sept. 19-22.

Check back for updates as the weekend festivities continue! #Area51mania

WHAT WE KNOW ABOUT AREA 51

Connie West (Little A'Le'Inn) says they are down from 2K to about 250 pre-paid tickets due to confusion leading up to #Alienstock in Rachel.

She remains excited and says there are people from all over the world at the event, #Area51mania | https://t.co/YFXHIcDLcD pic.twitter.com/DoCBBdz7s5