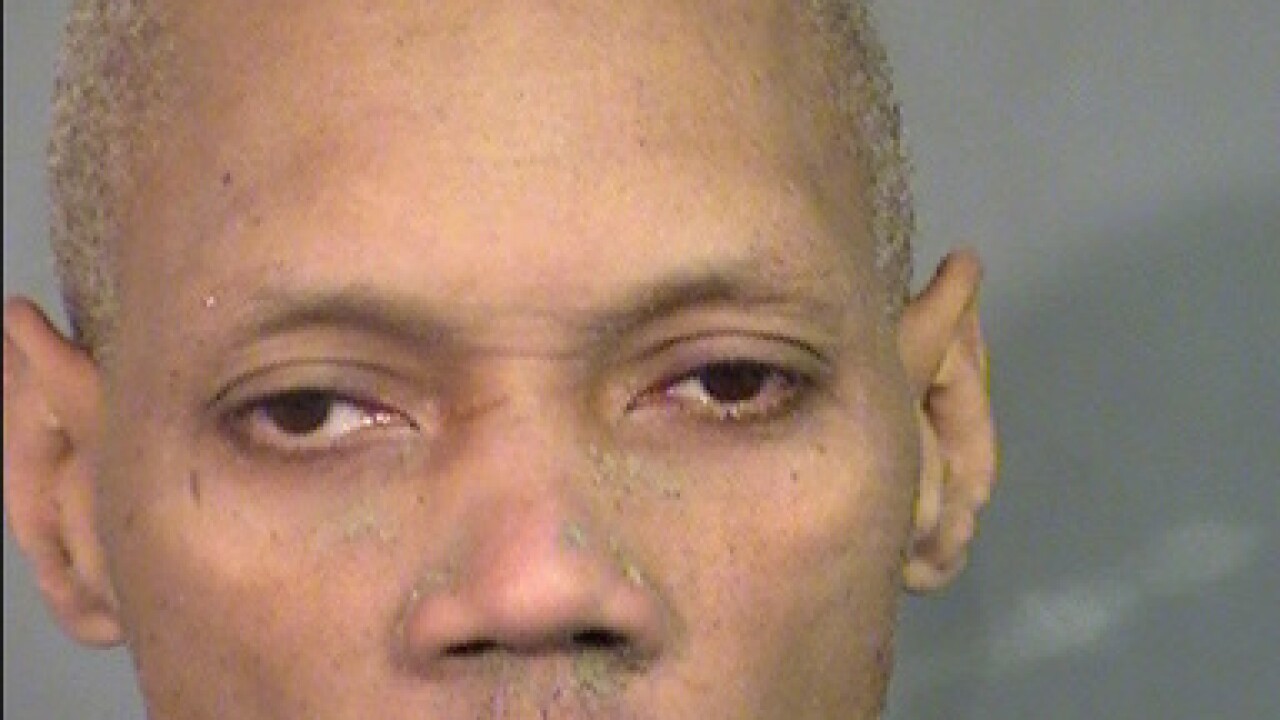 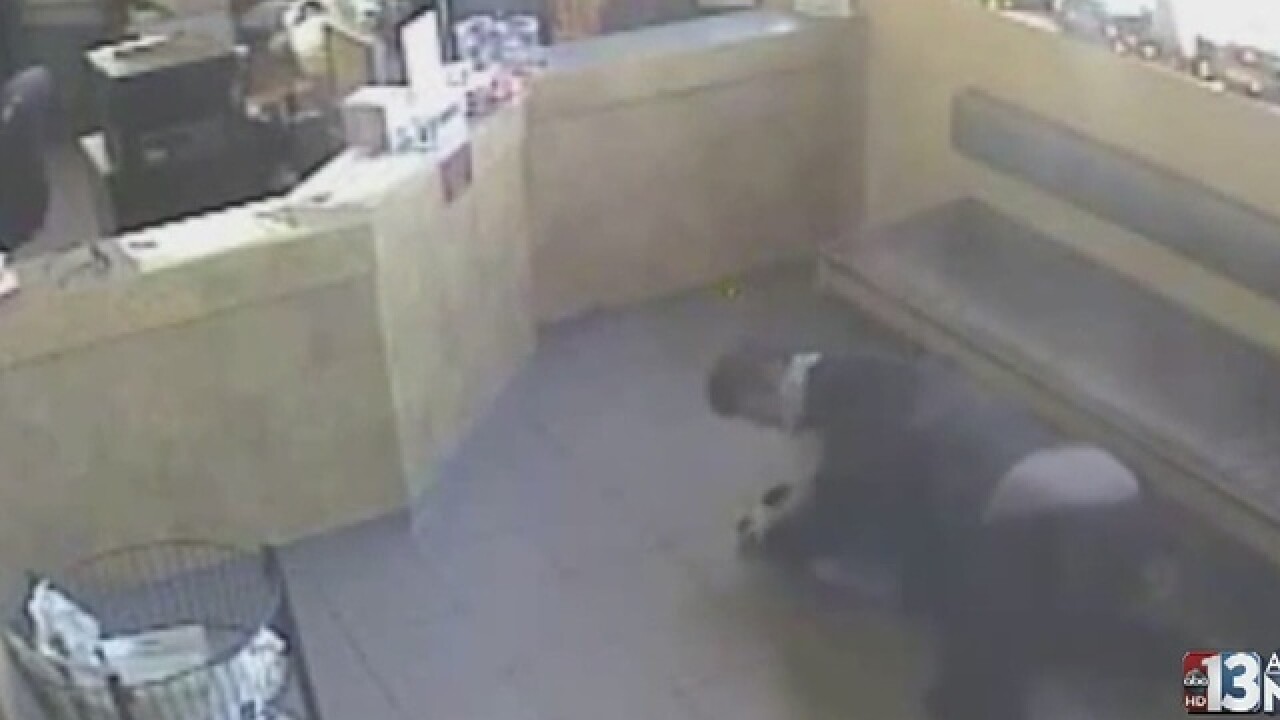 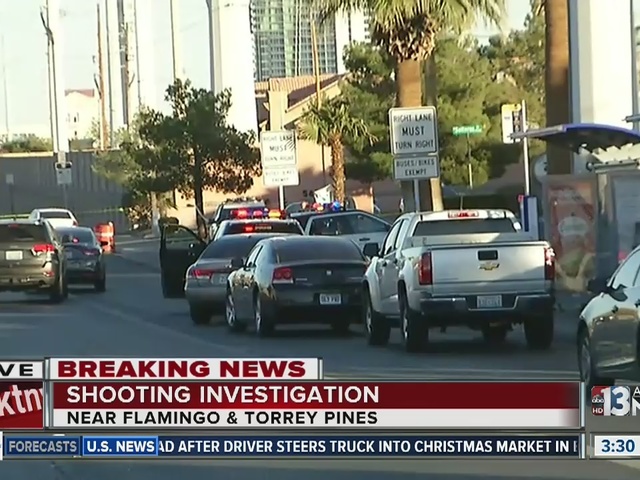 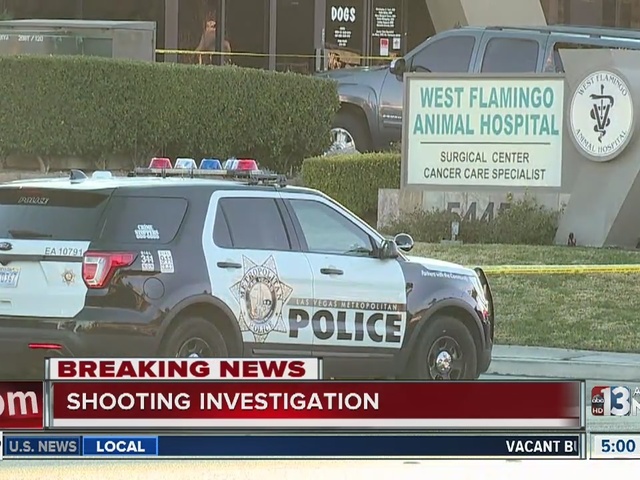 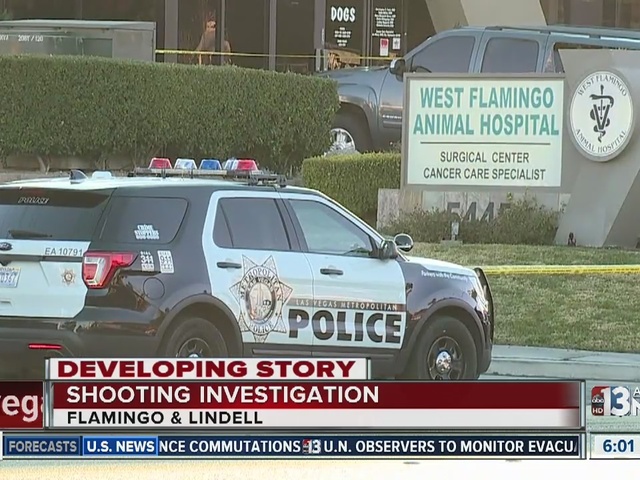 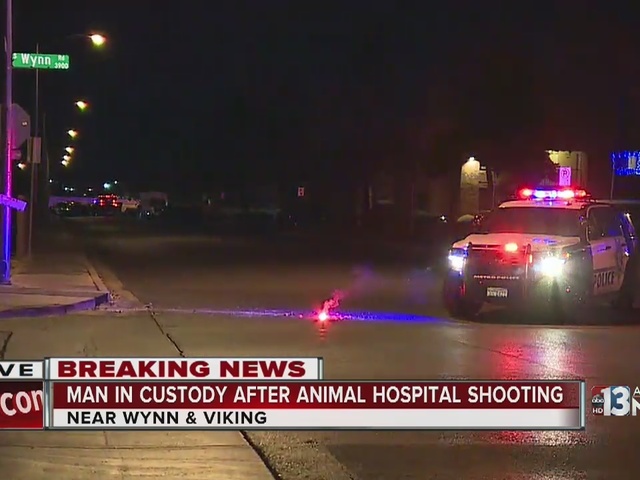 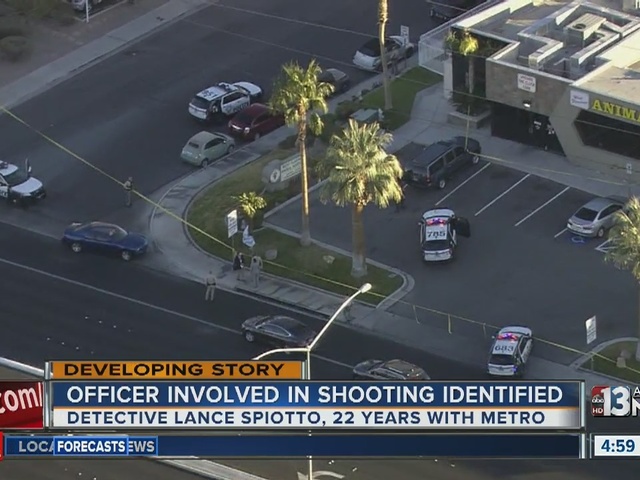 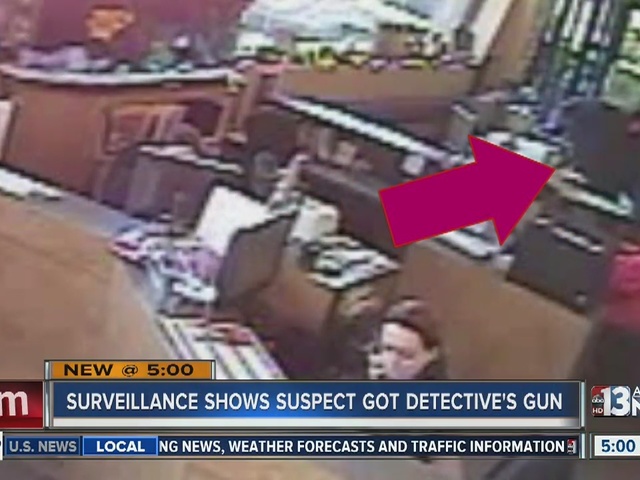 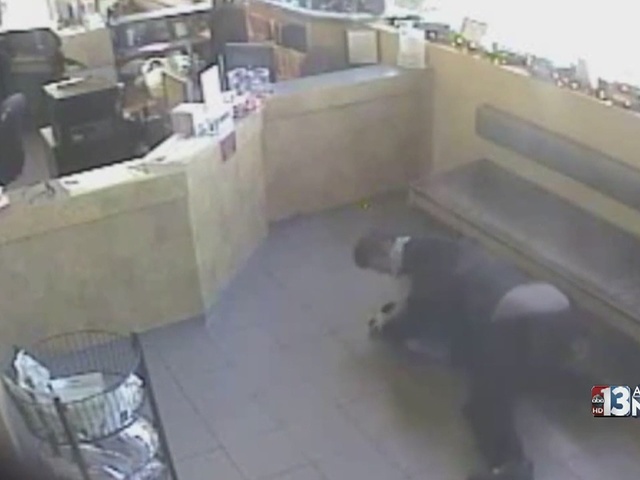 UPDATE DEC. 22: The suspect has been identified as 46-year-old Ronald Clark. Police say Clark took a cash box from a drawer and attempted to leave the Animal Hospital.

Detective Lance Spiotto, who was conducting personal business, attempted to intervene and engaged in a violent physical fight with the suspect. During the fight, Detective Spiotto fired his handgun at Clark. Clark was able to take Detective Spiotto’s gun and struck him in the head with it, causing injuries.
Eventually, Clark was able to flee from the scene on foot. A perimeter was established by arriving officers, but Clark was not immediately located.
Through evidence left at the scene and investigative techniques, detectives located Clark at an located at 3851 Wynn Road. Clark refused to exit and barricaded himself in the attic space of the building. Around 10:03 p.m. Clark was taken into custody.
Randy Sutton, 13 Action News crime and safety expert and a retired lieutenant with the Las Vegas Metropolitan Police Department, says the detective went above and beyond the call of duty.
“This is what cops do,” Sutton says. “He wanted protect the people who were in that establishment and literally put his life on the line to do it.
“This officer could’ve died within a heartbeat. He showed his courage, he showed his skill and he showed his heart by getting in this fight, literally, to the death. The fact that on Christmas of 2016, we are not facing the death of another police officer is something to be celebrated,” Sutton says.
Police said Clark had been to the same animal hospital the day before. He paid cash during that visit and knew where the money drawer was located, according to police.
Meanwhile, investigators are waiting for test results to determine if the off-duty detective was drunk when he fired at the armed robbery suspect after police said detectives noticed the smell of alcohol on Spiotto's breath following the shooting.
UPDATE DEC 21: The off-duty officer was identified as 48-year-old Detective Lance Spiotto, who has been with the department since August 1994.

Detective Spiotto is currently assigned to the LVMPD Investigative Services Division, Homicide and Sex Crimes Bureau, and has been placed on routine paid administrative leave pending the outcome of a review of this incident.

UPDATE DEC. 20: Employees at the West Flamingo Animal Hospital are trying to get back to normal after the robbery and shooting Monday.

Shaken employees were catching up on work after the office was closed for 10 hours.

Employees are thankful the off-duty officer stepped in and say his dog may get some extra treats as a thank you.

UPDATE: The suspect has been taken into custody following a barricade situation near Wynn and Viking roads. He has not yet been identified.

Police are still investigating whether the suspect fired any shots but did confirm the off-duty officer did.

The off-duty officer got involved after a suspect tried to rob the West Flamingo Animal Hospital.

A doctor inside the office told 13 Action News the robber walked in with a hoodie and bandanna covering his face and put a gun to the face of one of the employees.

The off-duty officer received cuts to the head but is otherwise OK.

Police are continuing to look for the suspect. People were evacuated near Wynn and Viking roads as police continue to investigate the shooting.

13 Action News will post updates once they become available.