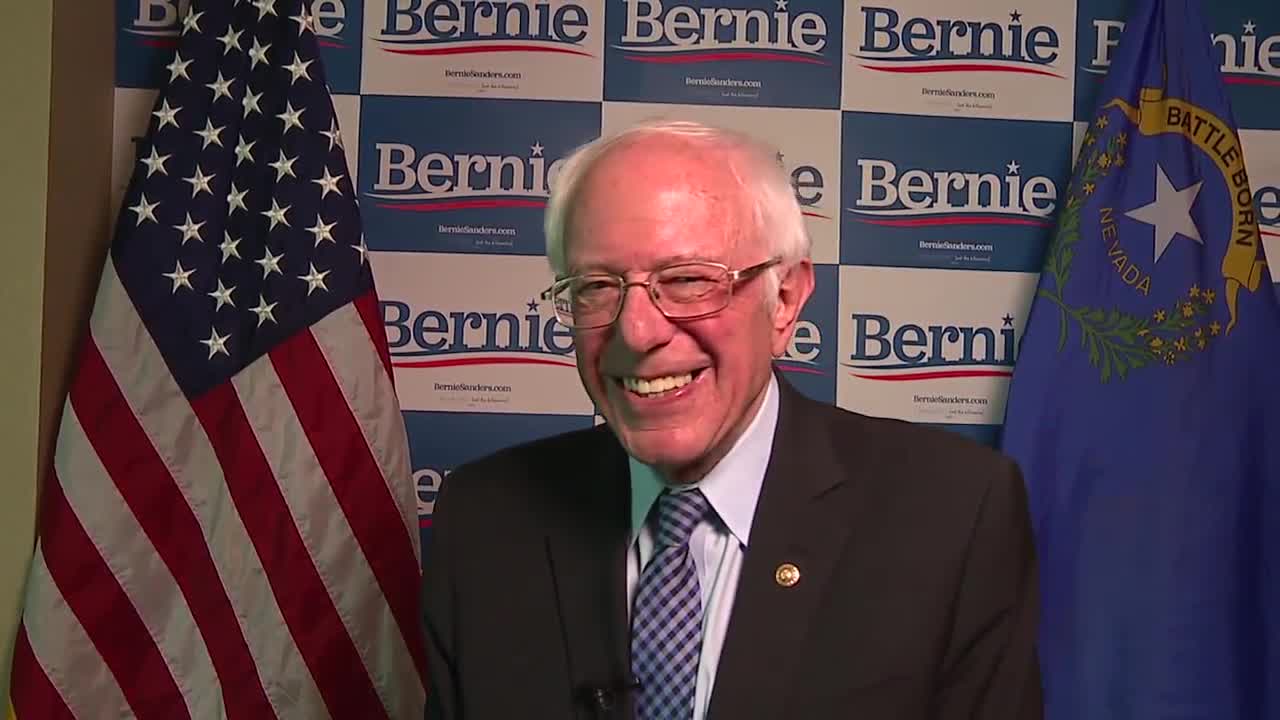 13 Action News had a chance to talk to Bernie Sanders one-on-one on Feb. 20. 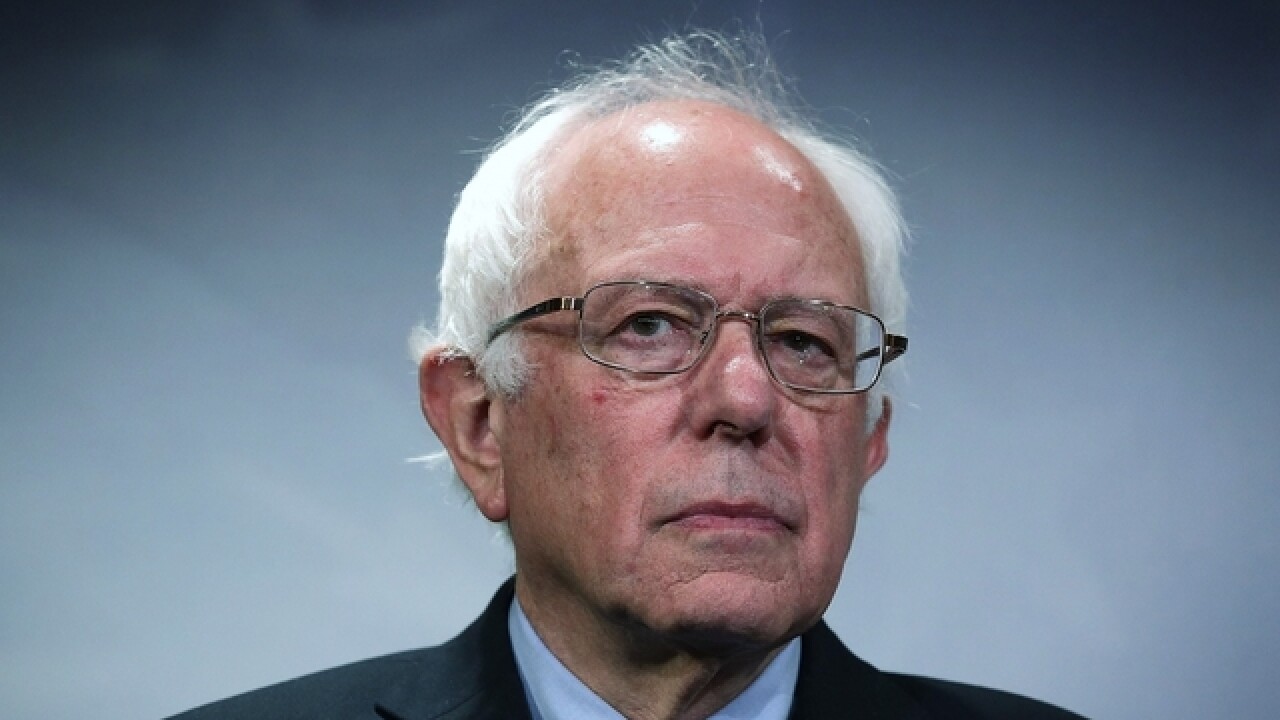 LAS VEGAS (KTNV) — 13 Action News spoke to presidential candidate Sen. Bernie Sanders on Thursday. Below is the transcript from the interview. Some of the text has been edited for clarity.

13 Action News: What is your response to the reaction that last night's debate was too much attacking of each other and not enough about policy?

Bernie Sanders: There was. I tend to agree.

I think maybe Mr. Bloomberg had a provocative impact on everybody else. (Laughs) It was his first debate.

I think some of that reaction has to do with the fact that there are people, I’ll just speak for myself, upset about somebody worth $60 billion who had not campaigned here in Nevada, did not campaign in Iowa, did not campaign in New Hampshire, is not campaigning in South Carolina, but is simply taking out his checkbook and saying, 'You know what? I'd like to be President of the United States. I’ll spend three, four, $500 million on TV ads all over the country.'

For those of us on the stage who have been working so hard, I can’t tell you how many town meetings we’ve had here in Nevada talking to people, people got a little bit upset about the arrogance of somebody who thinks, not only that he can buy an election because he’s a multi-billionaire, but if you look at his record -- the stop-and-frisk [program] in New York City where Latinos and African American young men were targeted -- just stopped walking down the street. Stopped, thrown up against the wall. It’s outrageous. He’s a billionaire who opposed easing the minimum wage, called for cuts to social security, Medicare and Medicaid.

So I think maybe Mr. Bloomberg’s presence might have provoked (smiling) a little bit of a reaction, I don’t know.

2. ON THE CULINARY UNION

13 Action News: It came up during the debate last night and it has been a talking point in this community... What do you have to say about the Culinary Union's decision not to endorse a candidate?

Bernie Sanders: Well you know, the Culinary Union is a great union. I have been impressed by them for years because what they have shown is people who are working menial jobs can earn a living wage, make a middle class life for themselves, if they have a strong union.

As someone who has a lifetime voting record with unions of almost 100%, I am deeply impressed by them.

There are areas where all of us are going to have disagreements. I happen to believe that we have to move aggressively towards a 'Medicare for All,' single-payer program, which will guarantee quality comprehensive health care to every man, woman and child in this country.

In my view it will be a major step forward for all unions, including the Culinary Workers Union. At the end of the day, we cannot continue to pay the highest prices in the world for prescription drugs. We can’t continue to have 87 million Americans uninsured or under insured.

3. ON ENDORSEMENTS FROM NEVADA POLITICIANS

13 Action News: Reps. Steven Horsford and Dina Titus both endorse Joe Biden (the only representatives to announce endorsements so far), and there are rumors that former Sen. Harry Reid will endorse Biden... What do you have to say to Nevadans who may be looking to their elected officials for guidance in this election?

Bernie Sanders: It’s not a great secret that our campaign is not the establishment campaign. I’m not gonna shock anybody.

I’ve taken on the establishment my entire life -- the political establishment, the economic establishment. I’m proud that we have some great members of the Congress supporting us. Rep. Alexandria Ocasio-Cortez, who was here a few months ago, [Rep. Jesus] Chuy Garcia from Chicago just came on board today, so we have a number of members.

There will be more endorsements for other candidates. The establishment is not with us, we accept that, but that doesn’t mean to say we can’t win.

4. ON HOMELESSNESS, 'THE HOMELESS BAN'

13 Action News: You were very vocal against the city's decision to enact what's being called a "homeless ban." As president, how do you come up with a solution that scales nationwide?

Bernie Sanders: The homeless crisis is not just in Las Vegas, NV. It is all across this country. It’s an outrage.

Tonight some 500,000 [people] will be homeless sleeping out on the streets or in homeless shelters. This is the richest country in the history of the world. That is just not acceptable.

We have a plan that will build 10 million units of affordable low income housing. Not only dealing with homelessness, but dealing with the reality that so many of our people are giving 40, 50% of their limited incomes to housing.

So housing is a major crisis right here in Nevada. It is a crisis all across this country. We will deal with it.

RELATED: How to participate in Nevada caucuses

Editor's note: At this point, the time allocated for the interview was up.

5. ON WHERE TO EAT IN LAS VEGAS

13 Action News: Can I ask one more question? Do you have a go-to restaurant in Vegas? Did you grab food after the debate?

Bernie Sanders: If I mention that I’ll get into trouble. (smiling)

Stay with 13 Action News for your election 2020 coverage. For a real-time count of caucus results after Saturday's caucuses, click here.