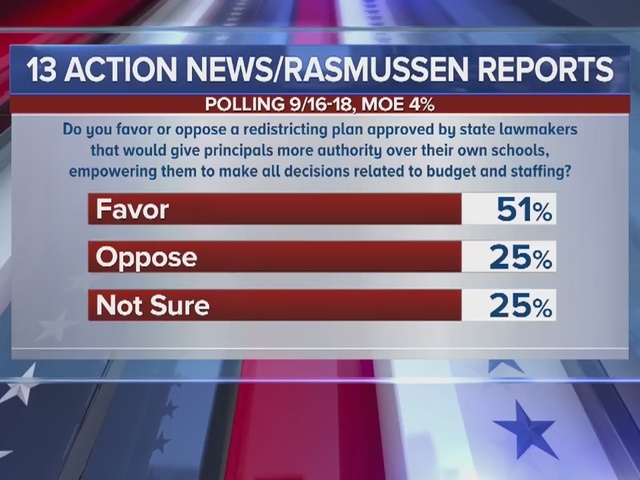 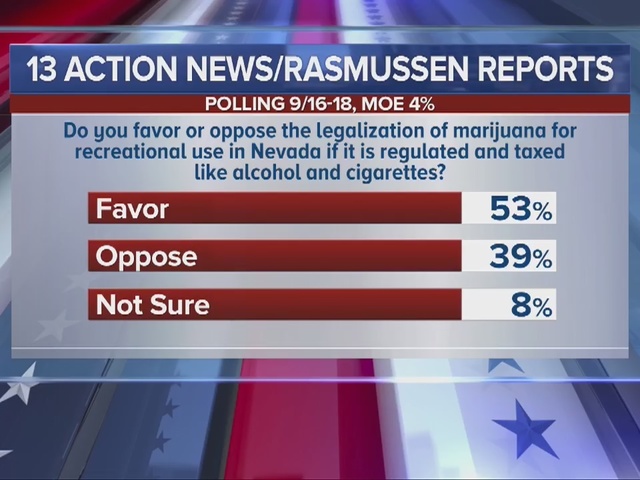 The poll of 800 likely voters found a 53 to 39 percent margin of support for legalizing recreational marijuana, which will be on the November ballot as Question 2.

Polling results show modest increases in support for the ballot initiative since a July KTNV-TV 13 Action News/Rasmussen Reports poll indicated a 50 to 41 split in favor of legalizing recreational use of marijuana. Rasmussen polls historically tilt Republican, according to a FiveThirtyEight ranking of polling groups.

Approval of the ballot question would mean people over the age of 21 could legally possess and use marijuana recreationally, and outlines a regulatory structure for a limited number of marijuana retailers. It also requires a 15 percent excise tax on retail sales of the drug, which would fund administrative costs of overseeing the industry with excess revenue going to K-12 education.

Voters were specifically asked if they “favor or oppose the legalization of marijuana for recreational use in Nevada if it is regulated and taxed like alcohol and cigarettes.”

Joe Brezny, a spokesman for the Yes on Question 2 campaign, said he was pleased with the results and that it was consistent with other polling results.

"We will be spending the next seven weeks educating all Nevadans about the benefits of regulating marijuana," he said in an emailed statement. "We have no doubt that once we do, a solid majority of Nevada voters will choose to regulate marijuana so that we can take the market away from criminal actors.”

Pat Hickey, a Nevada State Board of Education member and spokesman for a new group opposed to the initiative called "Protecting Nevada's Children," said the poll question's language was flawed and that the group was still confident the measure would be defeated.

"Our opponents have spent nearly $1 million and can barely achieve a majority in a poll that uses their talking points to ask the question," he said. "Protecting Nevada's Children has been operational for less than one week and in that time, we have seen tremendous bipartisan support from all corners of Nevada."

Voters polled also indicated support by a 51 to 25 percent margin for a recently approved plan that seeks to substantially overhaul how individual schools in the Clark County School District operate. Another 25 percent of voters polled were unsure.

The plan, which was unanimously approved by a committee of lawmakers earlier in September and will take effect next school year, would give more decision-making power including budgeting and hiring to individual school principals and require the district’s central administration to substantially reduce their budget.

Poll respondents were specifically asked, “Do you favor or oppose a redistricting plan approved by state lawmakers that would give principals more authority over their own schools, empowering them to make all decisions related to budget and staffing?”

All demographic groups polled said they’d support the measure, with larger percentages of Hispanics, Republicans and voters with children at home supporting it. Voters in Clark County approved the plan on a 54 to 22 percent level, with 22 percent unsure.

A full demographic breakdown of polling results is available here.

The 13 Action News/Rasmussen Reports poll has a four percent margin of error, with 95 percent level of confidence. The poll was conducted between Sept. 16 and 18 using a mix of 75 percent automated voice polling and 25 percent online responses.