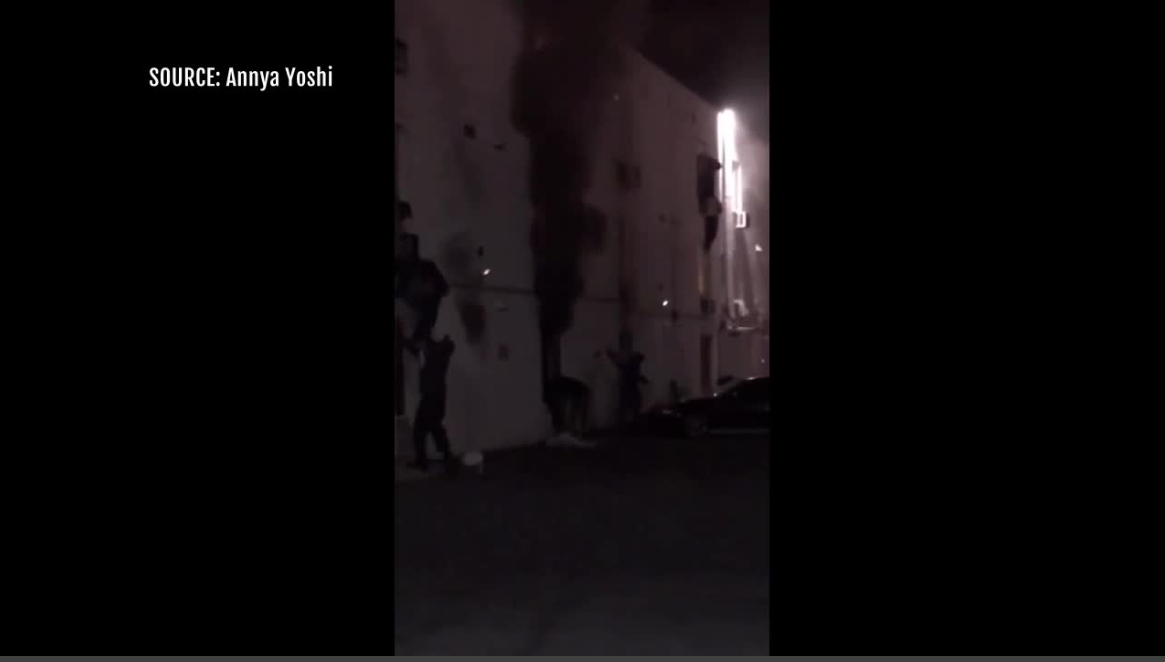 New video shows the horrifying scene on Saturday as tenants of the Alpine Motel Apartments in downtown Las Vegas tried to escape a devastating fire. Six people died in the fire making it the deadliest residential fire in Las Vegas Fire and Rescue's 20-year history, the department says.

UPDATE 6:45 P.M. DEC. 22: Las Vegas Fire & Rescue Deputy Fire Chief Robert Nolan said an active investigation is ongoing inside the apartment complex, with crews going room to room to check on the claims they heard from tenants of substandard maintenance at the building.

Nolan also said there were no active code complaints against the Alpine Motel Apartments. He said it would be a while before anyone would be let back inside the building due to investigation and possible remedies that may need to be done before it's deemed safe to enter again.

Six people died in the fire making it the deadliest residential fire in Las Vegas Fire and Rescue's 20-year history, the department says.

The Red Cross says it has assisted 39 people as of Sunday evening and the casework remains ongoing.

Investigators say the cause appears to be accidental, though an official cause has not been determined. The investigation remains ongoing.

Firefighters say many of the tenants had been without heat and using stoves and heaters to keep warm.

13 Action News has requested records from the City of Las Vegas of any code violations or complaints the Alpine Motel Apartments may have had.

Check back for updates as new developments emerge in our continuing coverage of the Alpine Motel Apartments fire.

UPDATE 6:30 A.M. DEC. 22: The City of Las Vegas urged people willing to help victims of the Alpine Motel Apartments fire to donate to housing and support programs at the Community Healing Fund through the Nevada Community Foundation in a Tweet Saturday.

Gov. Steve Sisolak highlighted the announcement with a tweet of his own, expressing his condolences to victims and their families.

Kathy and I were heartbroken to learn about the tragic apartment fire in Las Vegas. Our sympathies go out to the family and friends of the victims and all those displaced by this horrific fire. If you’re looking to help, please consider giving to The Community Healing Fund. ⬇️ https://t.co/MeZuKhghAw

The City of Las Vegas wrote it would open the "Alpine Hotel Family Assistance Center" at Dula Gym, 441. E. Bonanza., at 9 a.m. on Monday.

The city will have social services representatives and resources at the center to help victims get support and housing.

It was with a heavy heart and prayerful mind. I say the following While scenes like this are hard to watch, and even harder to forget once again i cannot express enough gratitude for our firefighters and first responders 'We are saddened by the loss of life especially during this time where family and friends are gathering for the holidays. At this time I am unable to comment while the investigation is underway. I want to thank once again the las Vegas fire Department Red Cross . church, and members of the community for their immediate assistance during this tragedy.

Mier also spoke with 13 Action News reporter Jeremy Chen, who said she was still processing the fire's aftermath. She says she wasn't aware of any issues such as heating in the building. Mier also said the building was up to code saying inspectors had check it about five to six months ago.

“From my understanding yes. Like I said, we have code enforcement and the health department come out and everything that needs to be fixed gets fixed in a timely manner.”

Mier said her thoughts are with the victim's families and couldn't believe the damage she saw.

“It’s beyond my scope of comprehension and it’s sad and I still don’t know exactly what happened, and my main concern is that the people that are still with us have a place to go and their pets are safe.”

UPDATE 9:12 A.M. DEC. 21: Las Vegas Fire & Rescue says that the total of number of people killed in the fire this morning is 6. They also say that 13 people were injured and 30 to 35 people were displaced.

According to LVFR spokesperson Tim Szymanski says that the fire was basically contained to one unit on the first floor and that the fire does appear to be accidental.

Besides the MGM fire in 1980, this may be the deadliest fire in the history of Las Vegas and Clark County. The MGM Grand fire killed more than 80 people.

During a press conference, Szymanski says that it appears there was not heat in the building and that many of the residents had been using stoves and heaters. The stove inside the unit where the fire originated may have been the source.

Szymanski also said that 3 people were found dead inside the building and another person was found on a sidewalk. The other victims also appeared to have been found outside of the building.

The Alpine Motel Apartments are owned by Las Vegas Dragon Hotel LLC. It was built in 1972 and has 41 units, according to the Clark County Assessor's Office.

UPDATE 8 A.M. DEC. 21: Las Vegas Fire & Rescue is now saying that 5 people were killed by a fire early this morning at an apartment building on 9th Street between Ogden and Stewart avenues in downtown Las Vegas. 13 people were injured and 23 people have been displaced.

Las Vegas police and investigators with the Clark County coroner's office are now involved with the investigation.

Las Vegas Fire & Rescue says people were seen jumping out of second floor windows to escape the flames. 4 people were killed by the fire and 7 people were transported to a local hospital. 5 of those people are in critical condition, according to the fire department.

Other residents were evacuated and taken to the nearby Las Vegas Academy to receive help.

LVFR says that this is the deadliest apartment building fire in Las Vegas history. There are road closures in place around the scene of the fire.