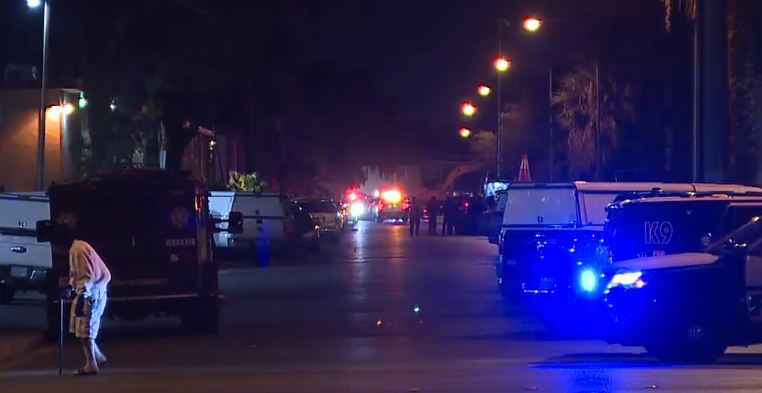 10:37 P.M.
One person is in custody after a shooting at the Siegel Suites, according to police. Officers say a mother and her adult daughters, adult nephew and a boyfriend to someone involved were all arguing when the fight escalated and the boyfriend pulled out a gun. Police say he fired 3-5 shots at the mother but she was not hit. The man is in custody. No reports of injuries.

UPDATE 7:23 P.M.
Las Vegas police say the suspect from a barricade situation on Athens Lane is now in custody.

6:42 P.M.
SWAT is on the scene of a barricade situation on Athens Lane near Desert Inn Road and Maryland Parkway, according to police. Officers say an argument occurred between two men and one of the men pointed a gun at the other. Police found the suspect's vehicle near Athens and Lisbon and believe suspect is barricaded inside an apartment in the area. Some apartments have been evacuated. Avoid the area.

UPDATE 6:36 P.M.
Regional Transportation Center of Southern Nevada says all lanes are now open on I-15 near Primm following a crash in the area.

5:45 P.M.
Traffic is moving slow northbound on the I-15 near Primm. Expect delays. No word yet if there is a crash in the area, check back for updates.

OVERNIGHT
A barricade situation that began shortly before 11 p.m. Sunday resulted in evacuations and road closures near Sahara Avenue and Maryland Parkway. Police say that two men ran from them when a patrol unit tried to stop them. The men then walked into a courtyard of an apartment building and attempted to hid on a landing.

One of the men pushed his way into an apartment to get away from an officer. The occupants, who knew him vaguely, exited the apartment.

About 10 residents were evacuated until the situation was resolved with the suspect in custody before 4 a.m.