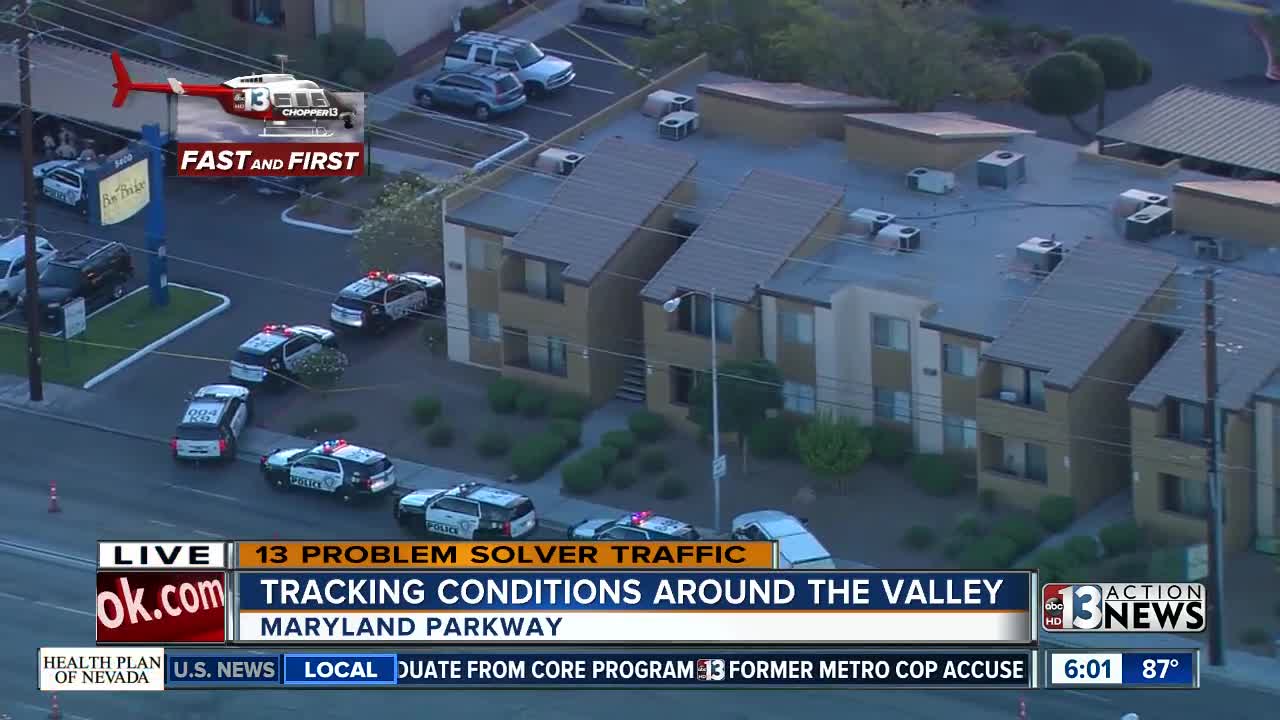 7:30 P.M.
Las Vegas police are searching for a man suspected of robbing a business with a threatening note, officers say. The suspect is described by officers as 6'0" and approximately 30-40 years old with a skinny build. Anyone with information is asked to call the Las Vegas Metropolitan Police Department Commercial Robbery Section at (702) 828-3591. To remain anonymous, call Crime Stoppers at (702) 385-5555. READ MORE

5:36 P.M.
Three people were transported to the hospital for smoke inhalation after a forklift caught on fire at the Las Vegas Convention Center near Paradise and Desert Inn roads, according to Clark County Fire Department.

Authorities responded to a call regarding the incident shortly after 4:20 p.m. and say the fire was knocked out by 4:27 p.m. It happened in the Central Hall and did not spread into the Convention Center, firefighters say.

11:30 A.M.
One of the people involved in the serious crash earlier today has died. Police say that the male passenger in the SUV that hit a parked trailer near Robindale and Duneville has passed away. The Clark County coroner will release his name after notification has been made.

8:20 A.M.
Las Vegas police say they have arrested the man involved in the domestic disturbance on Maryland Parkway Police say that the woman was treated for minor injuries at the scene. Residents in the apartment complex were evacuated during the incident, which lasted several hours. It began after a neighbor alerted police. No other injuries have been reported.

UPDATE: Police say suspect in barricade situation is in custody. The woman in the apartment is expected to be ok. She was treated for injuries on scene.
Maryland Parkway from Russell Road to Hacienda will be open within a hour @KTNV pic.twitter.com/EZCV2xZsZP

7:40 A.M.
Police are asking motorists to avoid area of Robindale Road and Duneville near Jones Boulevard and Warm Springs. At this time, they think an impaired driver slammed into a parked trailer. 2 people were transported to UMC Trauma, one of them has life-threatening injuries. The Fatal Detail has been called in to investigate.

Please avoid the area of Robindale and Duneville. A passenger is fighting to live after the suspected impaired driver slammed into a parked trailer. How??!! @LVMPD @DriveSafeNV @LVMPDEAC

6:20 A.M.
Police say that the situation on Maryland Parkway began around 3:54 a.m. Police received a call about a domestic disturbance in the 5400 block of South Maryland Parkway. Police say a man was seen threatening a female with a knife and dragging her into an apartment. SWAT and Crisis Negotiators are now on the scene.

#BREAKING: Barricade situation happening now on Maryland Parkway. Police say a man was seen threatening a woman with a knife and dragging her into an apartment in the area. The man is refusing to come out. @KTNV pic.twitter.com/BINBm26vQQ

HAPPENING NOW: Barricade situation on Maryland Parkway. Maryland Parkway has been closed in both directions from Russell Road to Hacienda. Avoid the area @KTNV pic.twitter.com/EGjy9xYcjz

5:30 A.M.
Maryland Parkway is currently closed in both directions between Hacienda and Russell Road for police activity.