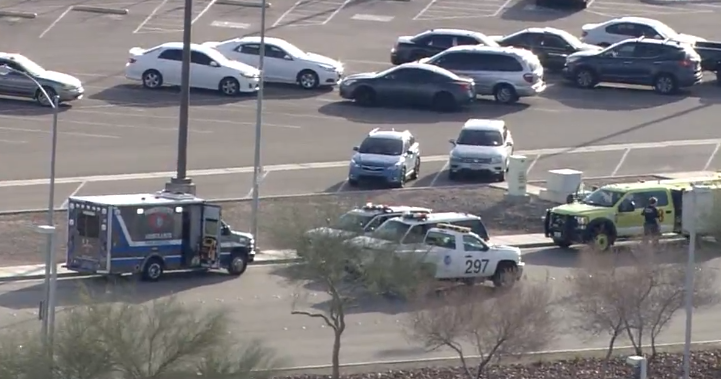 Police say a thief was arrested after running across a Las Vegas airport runway Friday afternoon.

9 P.M.
Las Vegas police are investigating an attempted street robbery near Tropicana Avenue and Mountain Vista. The victim was shot in the leg, and two suspects remained on the run after the incident.

3:30 P.M.
Police say they have taken the alleged thief into custody. The person reportedly stole items from the Terrible Herbst gas station near Sunset Road and Spencer.

This is happening at Spencer and Sunset. The thief stole something from @TerribleHerbst gas station across the street per @LVMPD pic.twitter.com/74nBhux5eS

3:10 P.M.
Police are looking for a man who reportedly stole something from a Terrible's gas station and ran onto airport property. He jumped a fence and ran towards a UPS plane on tarmac. Police have set up a perimeter and are looking for him.

2:30 P.M. UPDATE: Police say one person was ejected and transported to Sunrise hospital. That person is talking and awake. The crash happened just before 1:10 p.m. The southbound lanes reopened around 2:30 p.m.

2:15 P.M.
Lake Mead National Park Service along with police are investigating the death of a 48-year-old man who was found deceased on a boat near the harbor. Authorities did not release any further immediate details.

1:50 P.M.
Las Vegas police say there is a multi-vehicle crash with injuries near Eastern and Twain avenues. Northbound and southbound Eastern Avenue is closed. Authorities say to avoid the area while an investigation is underway.

⚠️ TRAFFIC ALERT 🚨 A multi-vehicle crash with injuries occurred near the intersection of Eastern & Twain Ave. North/southbound Eastern Ave is closed. Please avoid the are while an investigation is underway. #lvtraffic pic.twitter.com/xGqfg6dgZG

Multiple students are in custody and a number of citations were given. 2 students were taken to Juvenile Detention Center.

Authorities say no weapons were used.