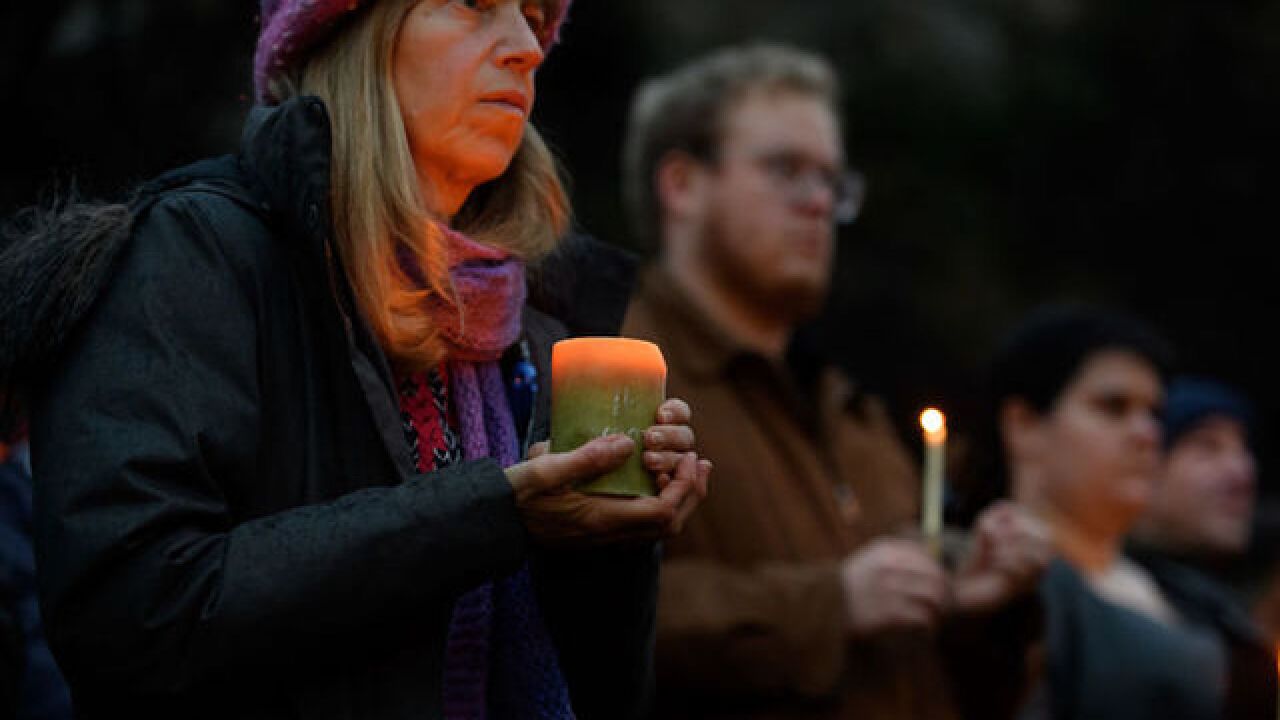 Image copyright 2018 Getty Images. All rights reserved. This material may not be published, broadcast, rewritten, or redistributed.
Jeff Swensen
<p>People gather for a interfaith candlelight vigil a few blocks away from the site of a mass shooting at the Tree of Life Synagogue on October 27, 2018 in Pittsburgh, Pennsylvania. </p>

In the wake of a shooting at Pittsburgh's Tree of Life synagogue that left 11 dead and six injured, religious communities around the U.S. and those embedded in them responded with messages of hope, solidarity and sadness.

Here is what they had to say.

"There's always been examples of bigotry, examples of hatred. You can cite all sorts of examples of defacement of synagogues ... There even were temple bombings during the civil rights era. But I'm sorry to say that in all of American history, there has never been a time when Jews were shot down, murdered in the course of prayer in their own house of worship, and this is the transom we've crossed over today."

“They were gunned down in a sacred, holy space where they were trying to pray to make the world a better place."

"I can't help but think about the effect that semi-automatic rifles have on our country and the ability one person can have to kill so many people in one moment."

Read more about how the Cincinnati Jewish community is responding here and here.

“I’m terrified ... my kids there, safety is our number one priority and they come to preschool they go to synagogue for services and anytime we step into one of these buildings we have to make sure our kids are safe."

"Unfortunately, this can still happen anywhere. And while the answer isn’t to run and hide, rather we to be ever more vigilant and if you see something unusual please report it immediately. May the memory of those so tragically take from their loved ones today be for a blessing."

Read more about how the Detroit Jewish community is responding here and here.

“I immediately thought of al the people who had come into the sanctuary to pray, to reach out to God, to be together in community. The same thing my congregation was doing just this morning."

Read more about how the Fort Myers Jewish community is responding here.

"This is happening right now, there's a toxic brew, anti-Semitic violent attitudes and we need to eradicate it."

Read more about how the West Palm Beach community is responding here.

A Jewish community center and retirement village in Overland Park, Kansas were the sites of anti-Semitic violence four years ago. The shootings claimed the lives of Corporon's father and oldest son. Read more here.

"Everyone has a responsibility to create a more inclusive society and challenge hateful rhetoric. The safety and well-being of our community depend on it."

Read more about how the Nashville community is responding here and here.

"It is a senseless and tragic loss of life, as well as a trauma to the survivors. It impacts all of us who pray and live within the Jewish Community."

“Unfortunately, this is not the first time this has happened. The fact that it happened in a synagogue is, of course, horrific. But whether it’s a synagogue or a church, or medical office, or a public place, or a school – we see this happen over and over again and this time it was the Jewish community. We knew it was going to happen, we just didn't know when."

Read more about how the Denver Jewish community is responding here.

"Its just so upsetting that people went to be with family, to have a celebration. And to have that interrupted by whatever the cause of this is just tragic and upsetting and unsettling."

"No one in the Jewish community would say they're surprised there’s anti-Semitism, and that it happened today."

"In the aftermath of the tragedy in Pittsburgh, we must stay vigilant for coded antisemitism that is being used by the current administration to further fan the flames of white supremacy."

"As a Black Jew, I fear that in response to this tragedy, Jewish communities will increase police presence in our sacred and community spaces. When I see cops in Jewish spaces I don't feel safe. I know I will be questioned and viewed as suspicious, and G-d forbid, I fear the worst."

Susan Gonzalez is a digital producer and reporter for the E.W. Scripps national team. You can follow her on Twitter @TheNewsan.