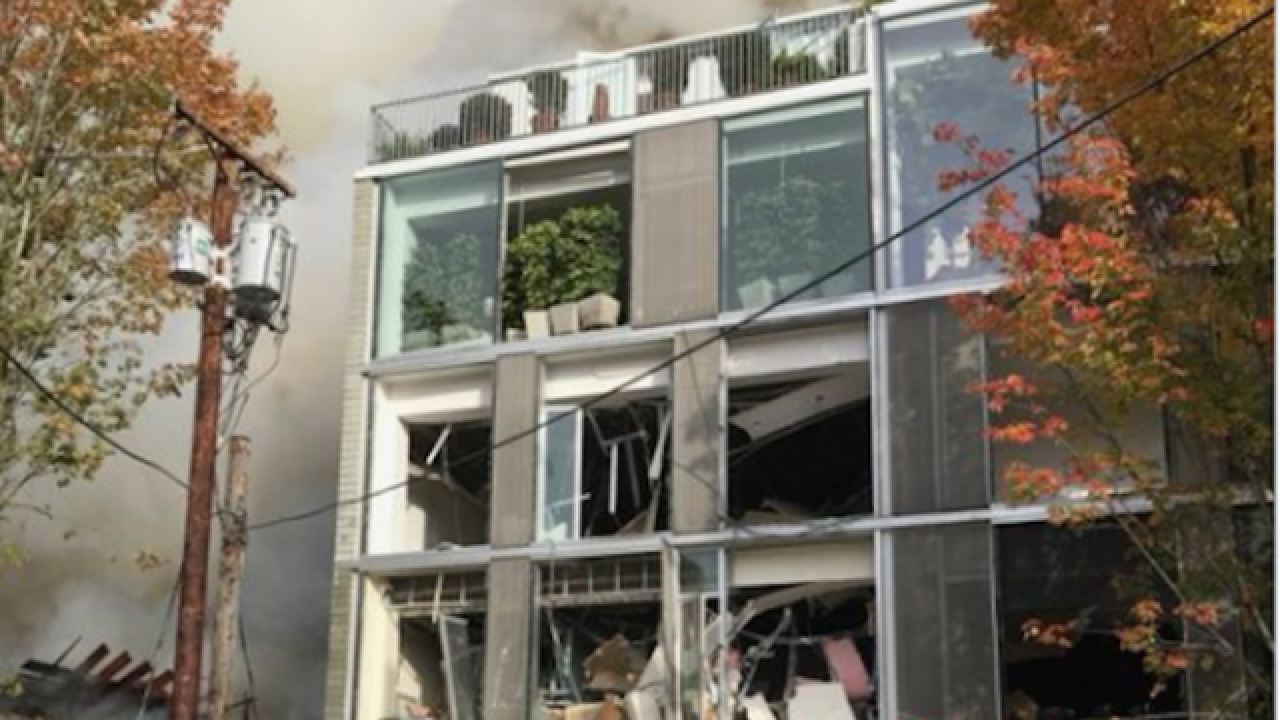 PORTLAND, Ore. (AP) — A powerful natural gas explosion rocked a busy Portland, Oregon, shopping district Wednesday, injuring eight people and igniting a fire that sent a huge plume of smoke over the heart of the city.

Three firefighters, two police officers and three civilians were hurt and one of the firefighters was in surgery Wednesday afternoon for a broken leg, authorities said. None of the injuries appeared life-threatening.

A building that housed a bagel shop and a beauty salon in the popular NW 23rd Street shopping district was reduced to rubble and its smoldering roof was splayed across the road.

The exterior of a building next door also was ripped off. Its windows were blown out, exposing the insides of what appeared to be high-end apartments, and debris was everywhere.

More on this as it develops.Huge explosion at 23rd and Glisan in Portland. My son took this. pic.twitter.com/XbOYkjEnY4

Firefighters swarmed the scene and dumped water from ladder trucks onto the smoking wreckage.

Structural engineers were asked to assess the building's integrity, and neighbors were told to shelter in place.

The situation could have been much worse.

Portland's NW 23rd Street — nicknamed "Trendy Third" — is packed with boutiques, bars and restaurants. Many of the businesses are on the street level with pricey apartments on the upper levels, and there's a day care in the vicinity.

But the explosion happened before 10 a.m. when many businesses were still closed, and first responders also had warning.

The utility that serves the area got a call saying that a construction crew had hit a gas line and authorities and utility workers who investigated had evacuated the building, said Melissa Moore, a spokeswoman for NW Natural.

People in the neighborhood reported smelling gas as they were evacuated and later felt the explosion.

An employee at a nearby kitchen accessories store said he was in the washroom when he felt a huge explosion and emerged to find thick smoke and haze. Scott Bergler said 15 windows in the first-floor store were blown out.

This happened by me in NW portland. Explosion. Smoke. pic.twitter.com/kjoKgVyCpz

As he evacuated the Kitchen Kaboodle shop, Bergler saw a firefighter on the ground who had been knocked flat by the blast.

"He was obviously in shock and crawling and having a hard time standing up," said Bergler, who was still visibly shaken by the ordeal as he gathered with co-workers in a parking lot.

Nicole Christiansen climbed exterior stairs to a rooftop of a nearby building so her 2-year-old son, Theo, could see everyone was safe.

The child had been evacuated from his day care center just before the blast but heard the explosion and was scared, she said. He looked on with wide eyes and clutched a crumpled napkin from an unfinished snack as firefighters poured water on the building.

"I saw the smoke from way down the hill, and I realized he was impacted," she said. "He has to go home."

Wow. Before and after of building affected by apparent explosion in NW Portland