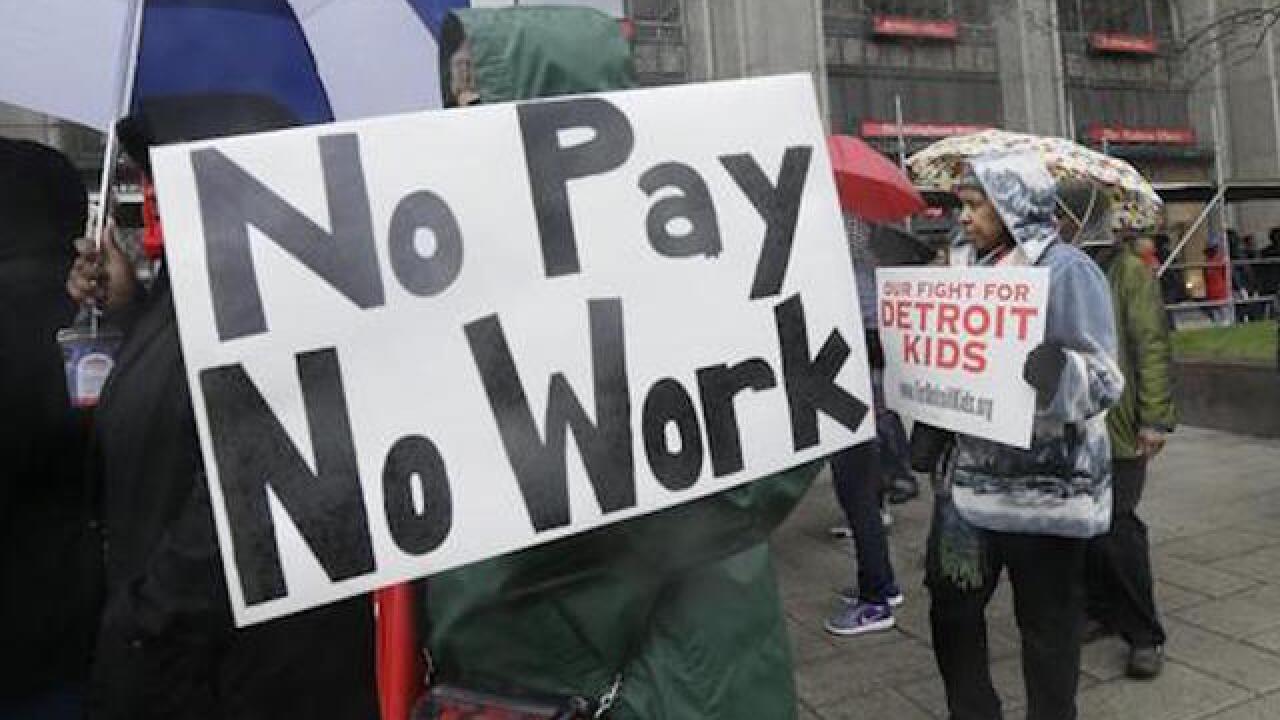 Copyright Associated Press
Carlos Osorio
<p>Detroit teachers march outside the district headquarters, Monday, May 2, 2016, in Detroit. Detroit Public Schools transition manager Steven Rhodes says 45,628 of approximately 46,000 students were forced to miss classes Monday as 1,562 teachers called in sick. The mass sick-out has forced the district to close 94 of its 97 schools. Detroit's schools are expected to be out of cash starting July 1. The state earlier gave the district $48.7 million in emergency funding to keep it open through June 30 as the Legislature considers a $720 million restructuring plan. (AP Photo/Carlos Osorio)</p>

DETROIT (AP) — Nearly all of Detroit's public schools were closed for a second consecutive day Tuesday as hundreds of teachers called out sick over concerns that many may not get paid if the financially struggling district runs out of money.

As of 7:15 a.m., 94 of the district's 97 schools were shut down — the same number that was forced to cancel classes Monday when more than 1,500 teachers did not show up for work.

It was not immediately known how many of Detroit Public School's approximately 46,000 students were affected by the continuing sick-out, but the district said more than 45,000 missed class Monday.

Teachers were expected to continue picketing outside district administrative offices where several hundred protested on Monday. A union membership meeting was scheduled Tuesday afternoon at a Detroit church.

"Let us be clear. We are still locked out," Detroit Federation of Teachers president Ivy Bailey said in an email late Monday to the union's rank-and-file. "We do not work for free and therefore we do not expect you to report to school tomorrow."

The district has been under continuous state oversight since 2009 and led by a series of emergency managers who have tried to cut down its debt and millions of dollars in annual deficits. Current transition manager and former federal judge Steven Rhodes, who oversaw the city's recent bankruptcy, warned over the weekend that $47.8 million in emergency money that the state approved in March will run out by June 30.

Teachers opting to have their pay spread over a full 12 months instead of the course of the school year would not receive paychecks in July and August without more help from the state.

The state Legislature is considering a $720 million restructuring plan that would pay off the district's enormous debt.

But the growing sick-outs that started late last year with just a small group of teachers appear to be threatening the plan.

Michigan House Speaker Kevin Cotter, a Republican from Mount Pleasant, said Monday that the sick-outs, conducted by "egotistical teachers," have cost Detroit schoolchildren more than one million hours of instruction.

But one parent who was missing work because her daughter has been shut out of class both days said the blame for the district's financial maladies falls on the shoulders of the state, not the teachers.

"I think (the teachers) have been doing the best that they can with the resources that they have," said Monique Baker McCormick, whose daughter is an 11th grader at Cass Tech. "They're just trying to survive themselves off of what little they get. So I don't blame them at all for fighting for what they deserve."

"I think this is the end and this is where the whole dismantling of the Detroit public school system begins," Baker McCormick said. "The state took over, and now look at where we are."