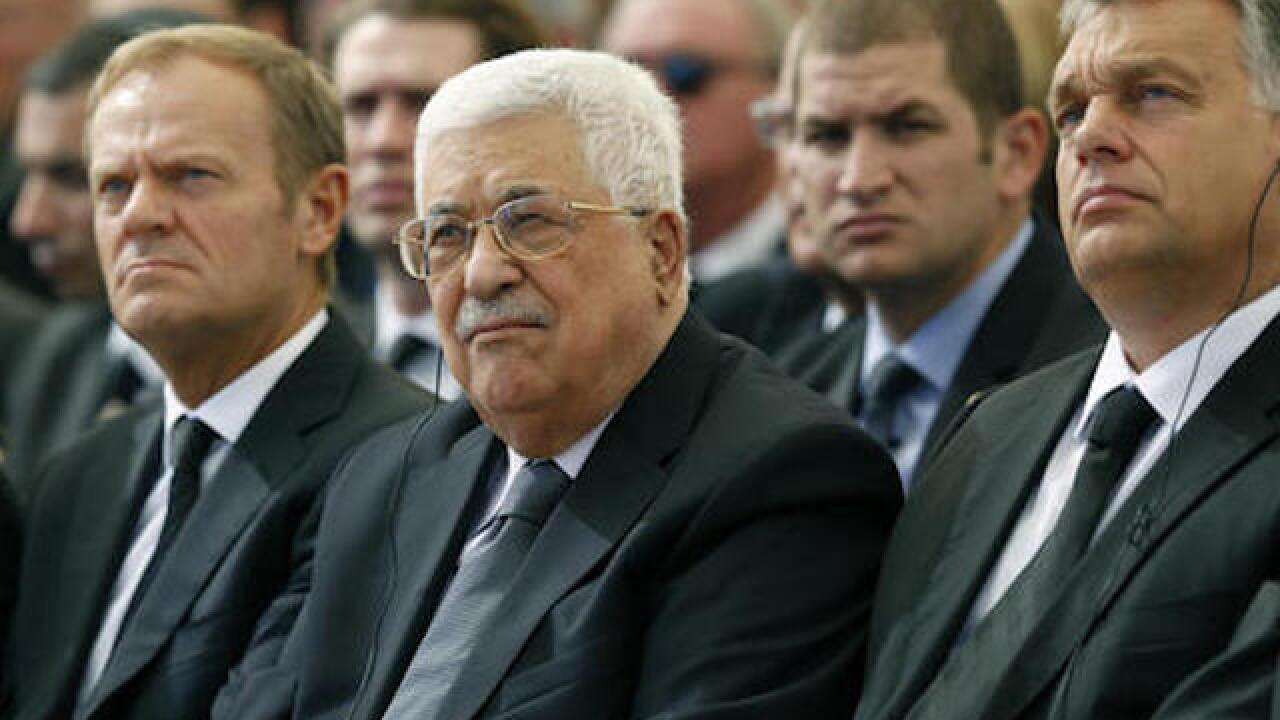 JERUSALEM (AP) — Shimon Peres was laid to rest on Friday in a ceremony attended by thousands of admirers and dozens of international dignitaries — in a final tribute to a man who personified the history of Israel during a remarkable seven-decade political career and who came to be seen by many as a visionary and symbol of hopes of Mideast peace.

U.S. President Barack Obama, former U.S. President Bill Clinton and Palestinian President Mahmoud Abbas headlined a long list of world leaders who converged on Israel's national cemetery, Mount Herzl, for the event. In a nod to the Palestinian leader, Abbas sat in the front row at the memorial service.

In a heartfelt eulogy, Obama said that Peres showed that "justice and hope" are at the heart of Israel's Zionist ideals.

Obama described the unlikely friendship he forged with Peres given their vastly different backgrounds.

"It was so surprising to see the two of us, where we had started, talking together in the White House, meeting here in Israel," he said. "I think both of us understood that we were here only because in some way we reflected the magnificent story of our nations."

He said Peres never tired, never dwelled on the past, and always seemed to have another project in the works.

"It is that faith, that optimism, that belief, even when all the evidence is to the contrary, that tomorrow can be better that makes us not just honor Shimon Peres, but love him," he said.

"The last of the founding generation is now gone," he added. "Toda rabah haver yakar," he said, Hebrew for "thank you so much dear friend."

Peres, a Nobel Peace Prize laureate who held every major office in Israel, including president and prime minister, died Wednesday, two weeks after suffering a stroke. He was 93.

Friday's funeral was Israel's largest gathering of international dignitaries since the funeral of Prime Minister Yitzhak Rabin, Peres' partner in peace, who was killed by a Jewish nationalist in 1995. The funeral created numerous logistical and security challenges, and roads, including the main highway from Tel Aviv to Jerusalem, were closed.

In an emotional eulogy, Clinton described Peres as a "wide champion of our common humanity."

Clinton was president when Peres negotiated a historic interim peace accord with the Palestinians in 1993. He described a warm, 25-year friendship and dismissed critics who described Peres as a naive dreamer. He recalled a meeting with Peres where Israeli and Arab children sang together John Lennon's "Imagine."

"He started life as Israel's brightest student, became its best teacher and ended up its biggest dreamer," said Clinton.

"He lived 93 years in a state of constant wonder over the unbelievable potential of all the rest of us to rise above our wounds, our resentments, our fears to make the most of today and claim the promise of tomorrow," he said.

It was an emotional return for Clinton, who eulogized Rabin at the same spot in Jerusalem following his assassination 21 years ago.

Peres, Israel's leading dove, and the hard-line Netanyahu were fierce political rivals and had vastly different world visions. But Netanyahu said they enjoyed a strong personal relationship and described Peres as a man of vision.

"I loved you. We all loved you. Farewell Shimon. Dear man. Great leader," he said.

Peres' casket lay in state on Thursday outside the parliament building, where thousands of people, including Clinton, came to pay their respects. Early Friday, an honor guard escorted the casket, together with Peres' family, along the short route to the cemetery.

After the funeral, the casket was led to the gravesite carried by eight members of an honor guard and led by soldiers carrying wreaths. Netanyahu and Obama chatted along the way, also talking with Peres' family.

An Israeli flag was removed from the casket as it was lowered into the ground in a plot alongside two other prime ministers, Rabin and Yitzhak Shamir.

With dignitaries seated around, soldiers passed bags of dirt to each other to cover the casket, and a military cantor recited the prayer for the dead. After it was in the ground, it was covered in wreaths.

While Peres is viewed in the West as a visionary advocate for peace, his legacy in the Arab world is mixed and reaction has been subdued. Animosity toward Israel remains strong in the Arab world, especially at a time of deadlock in peace efforts, and Peres is still associated with wars and settlement construction that took place during his lengthy career.

Abbas, however, was one of the lone Arab voices to express his sadness over Peres' death, and his aides say he wanted to recognize Peres for his years of efforts to promote peace. Abbas and Netanyahu, who have barely spoken to one another during the past seven years, shook hands and briefly chatted at the ceremony. Abbas greeted the families of Peres and Rabin, shaking hands and hugging dovish Israeli leaders before he was seated in the front row.

In an unprecedented seven-decade political career, Peres was credited with leading the country through some of its most defining moments: creating what is believed to be a nuclear arsenal in the 1950s; disentangling its troops from Lebanon and rescuing its economy from triple-digit inflation in the 1980s; and guiding a skeptical nation into peace talks with the Palestinians in the 1990s.

A protege of David Ben-Gurion, Israel's founding father and first prime minister, Peres served in parliament for nearly half a century, held every major Cabinet post, including defense, finance and foreign affairs, and served three brief stints as prime minister. He was the country's elder statesman as its ceremonial president between 2007 and 2014.

Peres created his non-governmental Peres Center for Peace, which raised funds and ran programs for cooperation and development projects involving Israel, the Palestinians and Arab nations. He was a huge proponent of Israeli technology and innovation, and gained international recognition as a globe-trotting celebrity preaching peace and coexistence.