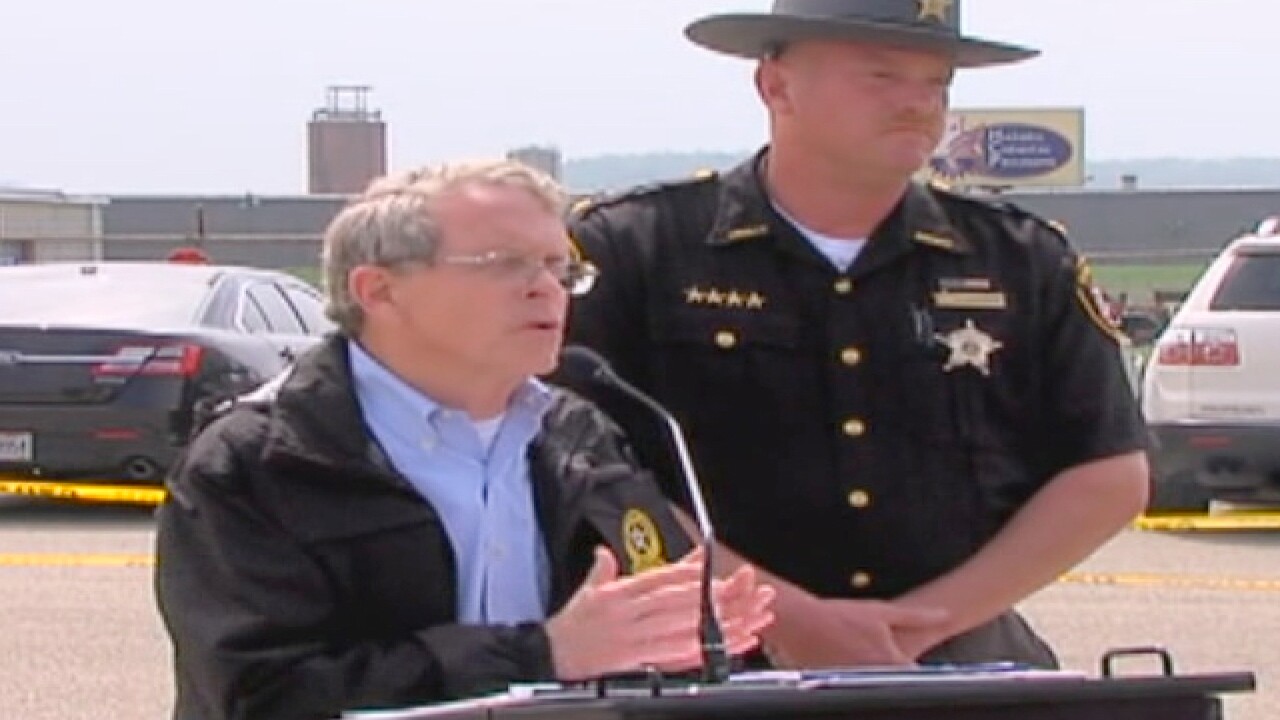 PIKETON, Ohio – Ohio Attorney General Mike DeWine declined to confirm or deny rumors about the case of eight family members killed in a rural county or the "cold-blooded murderers" responsible for the slayings during interviews Wednesday.

“We do not want to give the killers, or killer, any indication of where this case is going and what information we have or do not have,” he said.

During an interview on 700 WLW, DeWine dismissed a report claiming that one of the family members killed in Pike County Friday was found littered with dollar bills.

The Daily Mail, a British news site, reported that Donald Stone discovered the body of his cousin, Kenneth Rhoden, with dollar bills strewn from his “knees down." The report said "this may have been a sinister message from the killer, who police believe could have been a gangland member.”

“It does not sound correct to me, but I’m not going to get into knocking down every rumor,” DeWine said during the WLW interview.

The attorney general and Pike County Sheriff Charles Reader have acted as the main representatives for law enforcement speaking to reporters since eight family members were found dead in four Pike County homes Friday, but they haven't said what they believe to be the motive for the killings.

"I do not want to broadcast any information that would ... hinder our investigation" or help the killer or killers, DeWine said during a news conference later Wednesday afternoon.

DeWine also declined to go into more detail on the size of the “commercial” marijuana operation investigators discovered at three of the scenes where members of the Rhoden family were found dead.

He also said talks with the FBI and DEA were about technical help, and not the related to multi-state or international criminal activity connected to the killings, and dismissed other media reports speculating about possible theories.

“There’s a lot of rumors out there that are just dead wrong,” DeWine said during the radio interview.

Reader also cautioned that information about the case coming from any source other than him and DeWine's office "should not be treated as verified information."

Investigators have recovered 61 pieces of evidence, according to DeWine. They have also received more than 300 tips, and he urged anyone with information to call the Bureau of Criminal Investigation at 1-855-224-6446.

All of the tips will be checked out, DeWine said. He added that he did not want to "pollute" the thinking of witnesses or tipsters by confirming or denying rumors.

DeWine reiterated that he expected it would be “a lengthy investigation” requiring a large amount of "old-fashioned police work" to close. Having multiple victims and crime scenes added to the number of possibilities, and he and Reader both said they were focused on not only making an arrest, but having the killer or killers convicted.

“When we’re done, I don’t just want an arrest," Reader said. I want it ready for prosecution.”

Earlier Wednesday, DeWine spent a few hours visiting the four crime scenes. He said that was a practice he’d started as a county prosecutor that helped him understand crimes and the people affected by them.

“It helps you frame the scene,” he said, going on to describe how 16-year-old victim Chris Rhoden Jr.’s room was like that of a typical teenager.

"We have eight victims," DeWine said. "Eight human beings whose lives have been snuffed out."