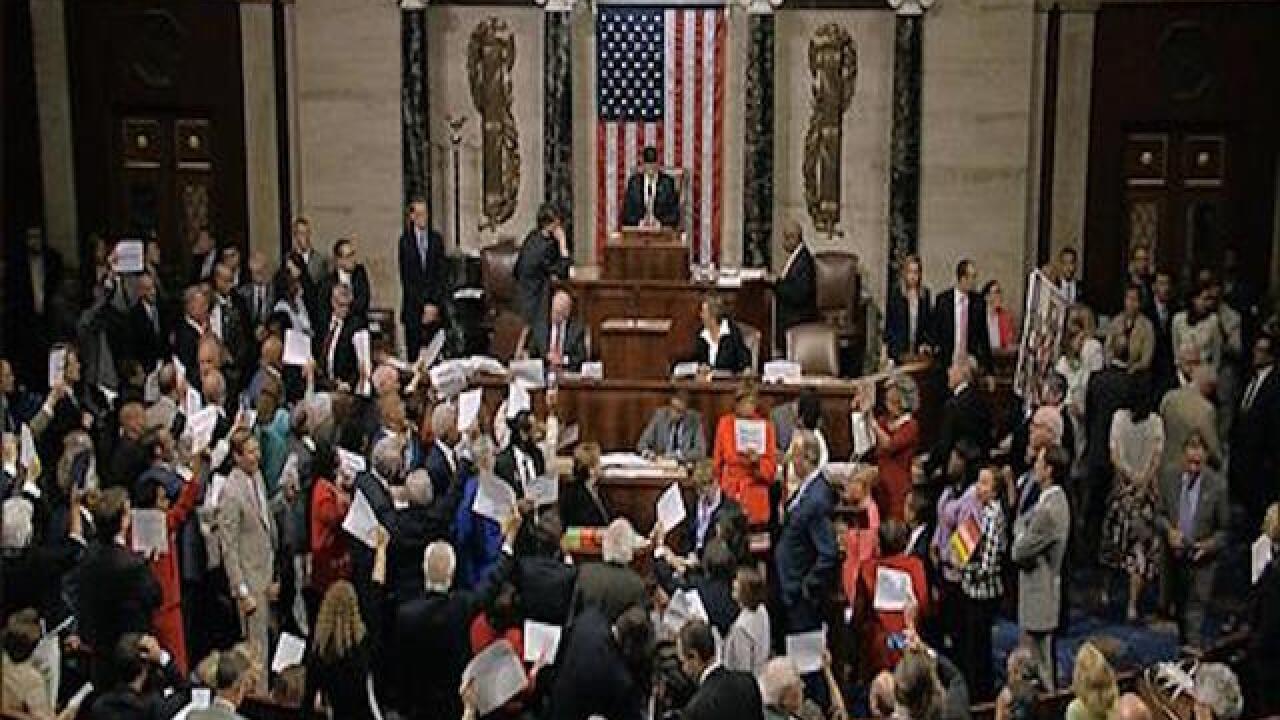 WASHINGTON (AP) — A drained and dwindling group of Democrats, some draped in blankets and toting pillows, carried their remarkable House floor sit-in past daybreak Thursday, disrupting the business of Congress in the wake of the Orlando shooting rampage with demands for gun-control votes in an extraordinary scene of protest broadcast live to the world.

Unyielding Republicans who control the chamber branded the move a publicity stunt and summarily adjourned the chamber at around 3:15 a.m. EDT until after the Fourth of July. By 6:30 a.m. Thursday — 19 hours after the protest commenced — some 16 Democrats remained including Minority Leader Nancy Pelosi, giving speeches that mixed victory declarations with vows to never back down in their drive to curb firearm violence.

"While the Americans don't always expect us to win, they do expect us to fight," said Rep. Al Green, D-Texas, as dawn broke and the few remaining lawmakers sat in a paper-cluttered chamber beneath empty visitor galleries. "We demonstrated to the American why we can't get votes on common sense safety measures."

When Republicans streamed to the exits hours earlier, Democrats remained on the House floor, shouting "No bill no break!" and waving papers with the names of gun victims written in black. Rep. Maxine Waters of California said she was ready to stay "until Hell freezes over."

With a crowd cheering them on from outside the Capitol and many more following the theatrics on social media, Democrats declared success in dramatizing the argument for action to stem gun violence.

Republicans fiercely resisted the Democratic pressure, saying their colleagues had accomplished nothing other than disrupting the business of the House to score political points. House Speaker Paul Ryan called it "a publicity stunt."

Rep. John Lewis, D-Ga., who had participated in the civil rights sit-ins in the South in the 1960s, said Democrats had "crossed one bridge." He added, "We have other bridges to cross." He said Democrats "made a down payment on ending gun violence" in America.

Pressure had been building on both sides of the Capitol in the wake of the shooting rampage at a Florida gay nightclub earlier this month that killed 49 people and injured 53 others. The assailant also died in the incident. The mass shooting followed similar tragic incidents over the past years including the school shooting in Newtown, Connecticut.

The agitation for action caused a Senate filibuster last week and led to the chaos on the House floor that lasted well into Thursday.

A burst of activity in the middle of the night included recorded votes on some other issues such as the Zika virus. The spectacle captured the attention of a Washington gridlocked on guns despite the slaughter in Orlando. Senate Democrats undertook a nearly 15-hour filibuster last week in fighting for the same cause.

House Republicans used their prerogatives as the majority party to muscle through a partisan bill funding the Zika crisis with no time for debate, overruling Democrat's objections and then moving to adjourn the House into next month as Democrats cried "Shame, Shame!"

Republicans shut off the cameras in the House gallery throughout most of the protest, but Democrats used their cellphones to capture the action, and C-SPAN carried the feeds live in an unprecedented move.

Ryan, R-Wisc., said the bills pushed by Democrats, to expand background checks and keep people on the no-fly list from getting guns, would take away people's constitutional rights and deprive them of due process, and he noted similar legislation was already rejected in the Senate earlier in the week.

The protest began around 11:30 a.m. Wednesday, unfolding on the House floor with little advance warning from the Democrats.

By evening, 168 House Democrats — out of 188 — and 34 Senate Democrats joined the protest, according to the House minority leader's office. One after another, they spoke of the need for gun control and talked of constituents who had been killed.

Scattered around the House floor were signs reading "Disarm Hate." Visitors watched from the galleries. A crowd of several hundred gun control advocates gathered outside the Capitol and cheered as Democrats addressed them.

The sit-in — in which Lewis played a leading role — had the look of a 1960s-style protest, as some lawmakers sat on the floor, others in their seats.

Republicans had staged a similar protest in 2008. Democrats controlling the House at the time turned off the cameras amid a GOP push for a vote to expand oil and gas drilling. Republicans occupied the floor, delivering speech after speech after Pelosi, then the House speaker, sent lawmakers bolting to their August recess. Pelosi at that time had ordered the cameras turned off.

C-SPAN, a cable and satellite network that provides continual coverage of House and Senate floor proceedings, does not control the cameras. They're run on authorization by legislative leaders. Although the cameras were turned off Wednesday, lawmakers relied on social media to transmit video, using Facebook, Twitter and Periscope.

C-SPAN broadcast live video streamed on Periscope and Facebook from lawmakers' accounts. Democrats posted the Capitol's main telephone number, which was overwhelmed, and urged constituents to call and request a vote. They also encouraged tweeting under the hashtag #NoBillNoBreak. round-the-clock protest complete with a sit-in on the House floor.

Lawmakers were refusing to leave until they secured a vote on gun control measures before lawmakers' weeklong break. The House finally adjourned when a majority Republicans pushed through a partisan bill to deal with the Zika outbreak.

Lawmakers reportedly brought sleeping bags, pillows and blankets, and even snacks to the House as the protest stretched toward midnight with no signs of ending. Meanwhile, several hundred protesters outside the Capitol gathered, shouting phrases like "hold the floor" and "do your job" at lawmakers inside the building.

Just a couple hours earlier, around 10 p.m., Ryan brought the house back to session, despite protests from Democrats.

After the House was in session for roughly 30 minutes, it was put back into recess. Democrats said they were prepared to spend the night on the floor of the House.

Exasperated Republicans were forced to recess while cutting off cameras that showed the protest. But in an unprecedented step, C-SPAN used live video feeds from one lawmaker's Periscope account and another's Facebook page to transmit words and images from the House chamber.

Around 11 p.m., things became so intense on the House floor that two lawmakers came within inches of each other.

Republican Rep. Louie Gohmert of Texas approached the Democrats and yelled, "Radical Islam!" Democratic Rep. Corrine Brown of Florida started yelling back at him. The two came within inches of each other, both yelling.
Lawmakers from both parties separated the two.

More than 200 Democrats led by Georgia Rep. John Lewis were demanding a vote on measures to expand background checks and block gun purchases by some suspected terrorists in the aftermath of last week's massacre in Orlando, Florida, that killed 49 people in a gay nightclub.

"No bill, no break," shouted Democrats, who demanded that Speaker Paul Ryan, R-Wis., keep the House in session through its planned break next week to vote on gun legislation.

Democrats accused Republicans of political cowardice by failing to schedule a vote.

"Are they more afraid than the children at Sandy Hook?" asked Rep. Mike Thompson, D-Calif., referring to the 2012 shooting that killed 26 people, including 20 elementary school children, in Newtown, Connecticut. "What is so scary about having a vote?"

Lewis, a veteran civil rights leader, asked what Congress has done, then answered his own question: "Nothing. We have turned a deaf ear to the blood of innocents. We are blind to a crisis. Where is our courage?"

The time is always right to do right. Our time is now. #goodtrouble #NOMORESILENCE pic.twitter.com/BYeDz9c8VF

Ryan dismissed the protest as "nothing more than a publicity stunt." In an interview with CNN, the Speaker said the House will not vote on a "bill that takes away a person's due process."

At one point, Democrats in Congress began singing the words to the popular protest song "We Shall Overcome." Watch below.

Amazing. Democrats are singing "We Shall Overcome" in Congress. #NoBillNoBreak #goodtrouble pic.twitter.com/CDLFPPejA4

The protest began around 11:30 a.m., interrupted briefly when Rep. Ted Poe, R-Texas, tried to start the House's work at noon. The customary prayer and pledge of allegiance went ahead, but Poe was forced to recess the House when dozens of Democrats refused to leave the well.

By late afternoon, 168 House Democrats — out of 188 — and 34 Senate Democrats joined the protest, according to the House minority leader's office, and there was no sign of quitting.

Congress remains gridlocked over gun control, a divide even more pronounced in a presidential election year. The sit-in had the feel of a 1960s-style protest, as some lawmakers sat on the floor, others in their seats.

Rep. Bobby Rush, D-Ill., said he was proud of his fellow Democrats and offered a rebuke to Ryan and other GOP leaders, who were absent from the chamber most of the day.

"You can run, but you can't hide," Rush said to cheers from his Democratic colleagues.

Republicans had staged a similar protest in 2008. Democrats controlling the House at the time turned off the cameras amid a GOP push for a vote to expand oil and gas drilling. Republicans occupied the floor, delivering speeches after then-Speaker Nancy Pelosi sent the House on its August recess. Pelosi ordered the cameras turned off.

Republicans ultimately forced the drilling provision to be attached to a stopgap spending bill.

C-SPAN, a cable and satellite network that provides continual coverage of House and Senate floor proceedings, does not control the cameras. They're run on authorization by legislative leaders.

Although the cameras were turned off Wednesday, lawmakers relied on social media to transmit video, using Facebook, Twitter and Periscope. C-SPAN broadcast live video streamed on Periscope and Facebook from lawmakers' accounts. Democrats posted the Capitol's main telephone number, which was overwhelmed, and urged constituents to call and request a vote. They also encouraged tweeting under the hashtag #NoBillNoBreak.

Joining the protest were more than a dozen Democratic senators, including Minority Leader Harry Reid, and Sens. Bernie Sanders, I-Vt., and Chris Murphy, D-Conn., who had waged a nearly 15-hour filibuster last week to force votes in the Senate on gun legislation. Those votes failed on Monday night.

Ryan said Wednesday that House leaders were "waiting to see what the Senate does before proceeding" on gun legislation, including a possible compromise that Sen. Susan Collins, R-Maine, is seeking.

Pelosi, now the minority leader, said the House needs to act on gun legislation, rather than continually hold moments of silence in memory of victims of gun violence.

"We truly believe that if there were a vote that we would win the vote, because 85 to 90 percent of the American people ... support responsible background checks legislation," Pelosi said.

Despite the lack of cameras, California representative Scott Peters was posting live videos of the sit-in via Periscope.

So why not turn on the House cameras do the world can see what's happening here? What is @PaulRyanPress afraid of? https://t.co/ezNbAqVtj7