What you need to know about Monday's presidential debate 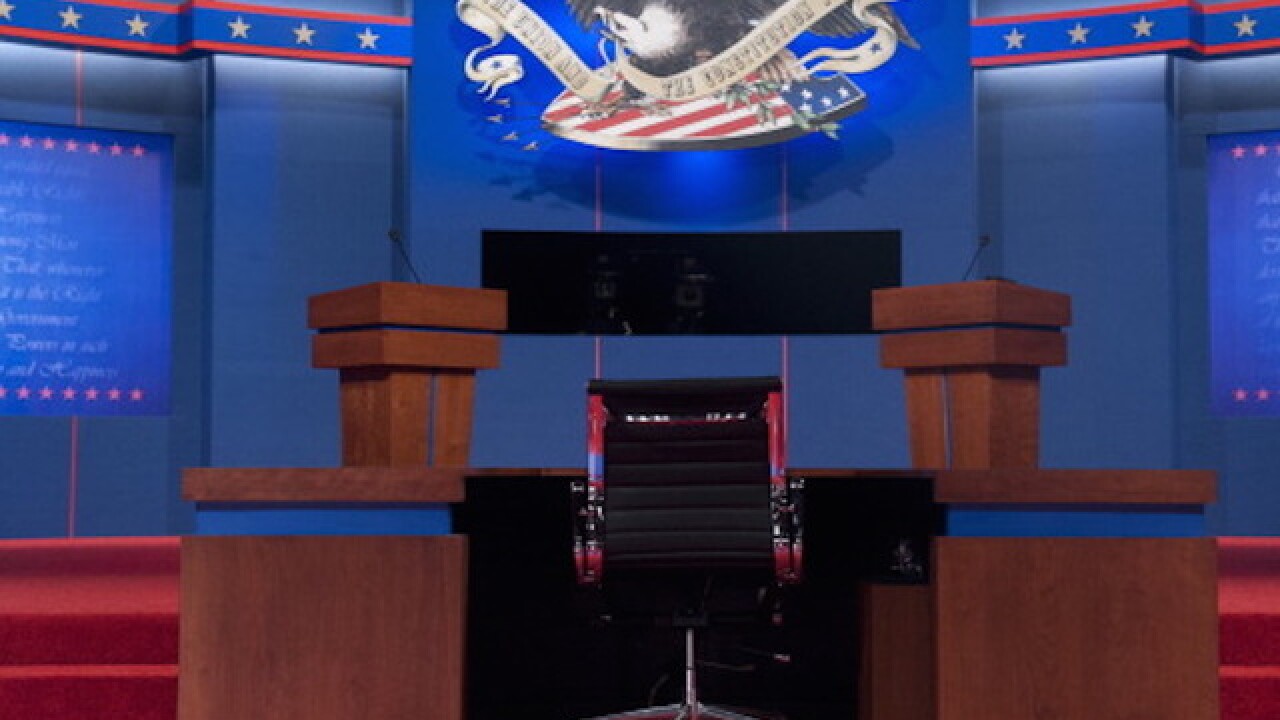 Copyright Getty Images
SAUL LOEB
<p>The stage is set prior to the first presidential debate at Magness Arena at the University of Denver in Denver, Colorado, October 3, 2012. US President Barack Obama and Republican Presidential candidate Mitt Romney will square off during the first of three debates at 9 p.m. EST. AFP PHOTO / Saul LOEB (Photo credit should read SAUL LOEB/AFP/GettyImages)</p>

The debate is scheduled to begin at 9 p.m. Eastern and will last 90 minutes.

Here is what you need to know for Monday’s debate:

Clinton and Trump were the only two candidates invited to Monday’s debate based on polling. In order to be invited, a candidate must poll at 15 percent or above in a series of national polls to qualify.

The Commission on Presidential Debates picked NBC Nightly News anchor Lester Holt to moderate Monday’s debate. It is the first time Holt has hosted a presidential debate between the major party nominees.

Including the face of NBC News might be considered surprising given the GOP canceled a scheduled debate during the presidential primaries on NBC. Republican leaders were frustrated by a debate held on NBC’s sister station CNBC that featured what the party described as a lot of “gotcha” questions.

Holt said in a statement that he reserves the right to change the topics based on events. With Black Lives Matter protests taking place across the country, there will be pressure on Holt to ask the candidates about policing and racial tensions.

Other issues Holt is likely to ask: How will immigration reform make the United States safer; how will rejecting the Trans-Pacific Partnership spark the economy; and how will the candidates reform college education.

There will be six 15-minute segments during the debate. Holt will start out with a question that the candidates have two minutes to respond to. The candidates will then have an opportunity to respond to each other. Holt can use the balance of the time in the segment for a deeper discussion of the topic, according to the debate commission.

All about that base

With two historically disliked candidates on the debate stage, the approach the candidates take on Monday could be a deciding factor in the election. Both candidates are struggling to win over sections of their respective party’s base.

Will Clinton highlight her plans on making public college education free for most students, or spend her efforts trying to attract right-leaning voters frustrated at Trump’s sharp rhetoric? And how much time will Trump spend on talking about a rigged system – a common theme of Sanders’ campaign?

Which Trump will we see?

While the GOP debates saw an average TV audience of 15 million, Monday’s debate audience could easily see viewership that is four times higher. Speaking to millions of voters for the first time, will Trump tone down the rhetoric that caused a number of fellow GOP candidates not to back him?

Trump has also never participated in a debate where the crowd is not allowed to react to the candidates. For a candidate who likes to play to the audience, Trump could be out of his comfort zone in Monday’s debate. Even with several inherit advantages for Clinton, Trump's unpredictability will be a challenge for Clinton to prepare for.

The subject of Clinton’s use of a private email server was not a central subject of the Democratic Party debates during the primary season. Sanders, Clinton’s top challenger, did not challenge Clinton on the email scandal. Trump has not been nearly as muted on criticizing Clinton for her email usage.

Meanwhile, Holt’s NBC colleague Matt Lauer was decried following NBC’s Commander in Chief Forum for asking Clinton questions about the emails, which have largely already been answered. Will Holt opt to avoid the subject completely given the criticism Lauer faced?