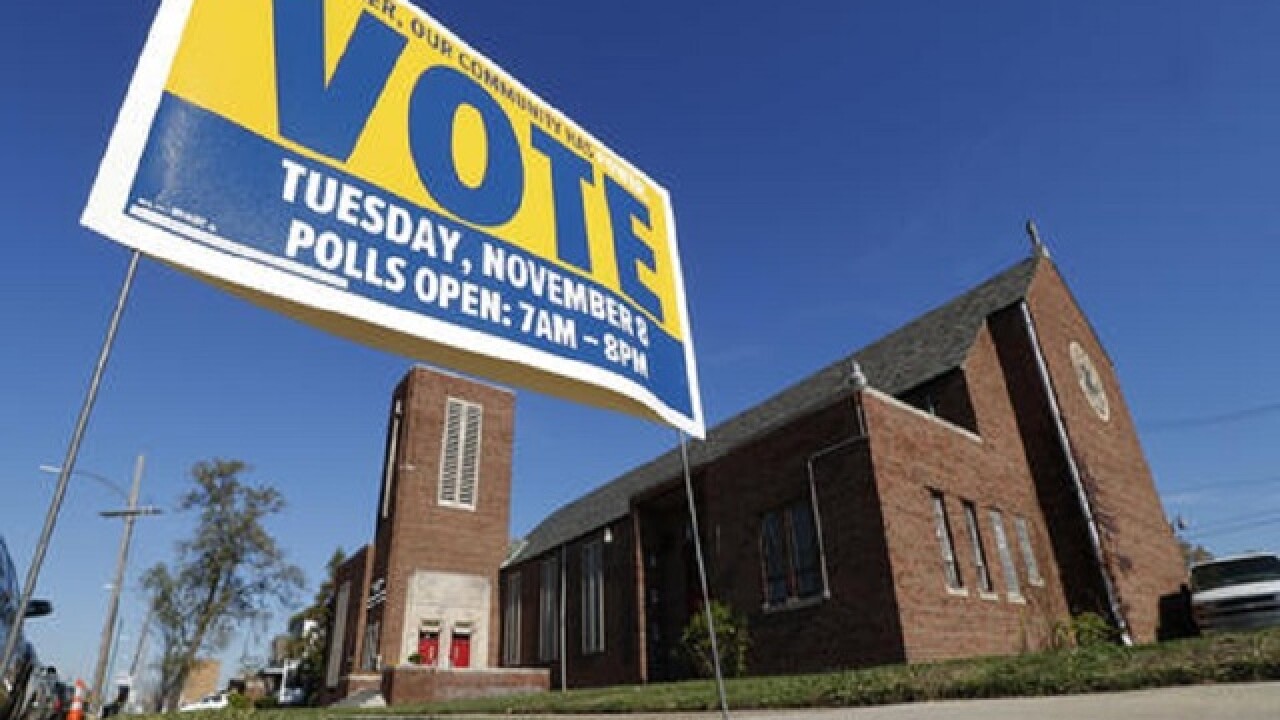 Paul Sancya
<p>A get out the vote sign is shown outside St. Matthew Missionary Baptist Church in Detroit, Sunday, Nov. 6, 2016. At Sunday services, in rallies and on social media, black pastors labored to persuade congregants they should vote, hoping to minimize an expected drop in black voter participation this Election Day compared to four years ago when Barack Obama was a candidate. (AP Photo/Paul Sancya)</p>

DETROIT (AP) — At church services, in rallies and on social media, black pastors urged congregants to vote, hoping to inspire a late flood of African-American turnout that could help propel Democrat Hillary Clinton to victory in critical swing states on Tuesday.

On the final weekend of the presidential campaign, a pastor in Detroit spoke of voting and citizenship. In Philadelphia, the minister reminded congregants others had died for their chance to cast a ballot. The Rev. Jesse Jackson spoke to a few hundred people in front of City Hall in Tallahassee, Florida, before they marched a block over to the county courthouse to vote early.

Along with women and Hispanics, African-Americans are seen as critical to Clinton's chances against Republican Donald Trump. However, early voting data from key states indicate turnout will not be as high this year as it was four years ago, when Barack Obama, the nation's first African-American president, was on the ballot. Sunday's efforts were aimed at minimizing that decline.

Bishop T.D. Jakes, pastor of the Texas megachurch The Potter's House, tweeted on a red, white and blue backdrop: "Make sure your voice is heard. Vote on Nov. 8."

"Preachers are trying to strike a moral nerve and somehow penetrate the fog of indifference and try to remind people what's at stake this year," said the Rev. James Forbes, retired pastor of The Riverside Church, in New York, which hosted a national get-out-the-vote telecast Sunday night called "The Revival: Time for a Moral Revolution in Values."

"These are very crucial times to a nation with so much anger, so much anxiety about the future," Forbes said at the revival Sunday night. "We must be very careful not to fall prey to the siren call of those who are peddlers of false hope, illusions and lies."

Forbes has been traveling the country to mobilize voters. He and other pastors have taken pains to emphasize they were not endorsing a candidate, but it was hard to mistake some remarks Sunday that signaled a deep opposition to Trump.

"There are some folk in this country who think that to make this country great again, we've got to exclude folks," said the Rev. Mark Tyler, pastor of Mother Bethel A.M.E. Church, in Philadelphia, one of the first black churches in the U.S. "We've always been great because we've always been open to strangers. If it was not for the goodness of the first Americans, there would be no America today."

Trump has made his own efforts to build support among black voters, saying their loyalty to the Democratic Party has not improved the safety of their neighborhoods nor the quality of their schools. "What do you have to lose?" he has said. However, polls have consistently shown Trump's support among African-Americans to be in the low single digits.

Besides the absence of a black candidate on either major-party ticket, community leaders and others blame the lower turnout so far on voter suppression efforts, such as limits to early voting hours in some communities and challenges by individuals to voter registrations. A federal judge Friday ordered registrations to be restored in three North Carolina counties for what could be thousands of challenged voters.

Underscoring the importance of black voters to her campaign, Clinton started her day Sunday with the largely African-American congregation of Mount Airy Church of God in Christ, in Philadelphia. The Rev. Leah Daughtry, chief executive of the Democratic National Convention, spoke across town at Mother Bethel A.M.E. Church.

Worshippers clapped and cheered as Tyler, the Mother Bethel pastor, told them "don't let there be any excuse" for not showing up at the polls, even with a lingering public transit strike. "Somebody died for you to have a right."

In Tallahassee, at the event with the mayor and local pastors, Jackson referenced civil rights leaders and the chaotic 2000 presidential election he contended was "stolen" on behalf of George W. Bush by the U.S. Supreme Court.

Roz Booker, a black voter, said this election season has been a "mess," but her ancestors had died for the right to vote and she had already cast her ballot. Booker described herself as "anti-Trump," criticizing the Republican nominee for what she called "promoting hate" against minorities.

At New Destiny Christian Fellowship, a predominantly black church in Detroit, the pastor spoke of being a "good citizen" on Election Day. Congregant Tiffany Gunter, who is voting for Clinton, noted that enthusiasm in 2016 was lower among African-Americans than in the previous presidential race. "What Hillary Clinton has is experience. Is she perfect? Absolutely not. There are things about her that I wish were different, but I believe that she does listen and she can adapt," Gunter said.