40 to 50 buildings damaged in Oklahoma earthquake 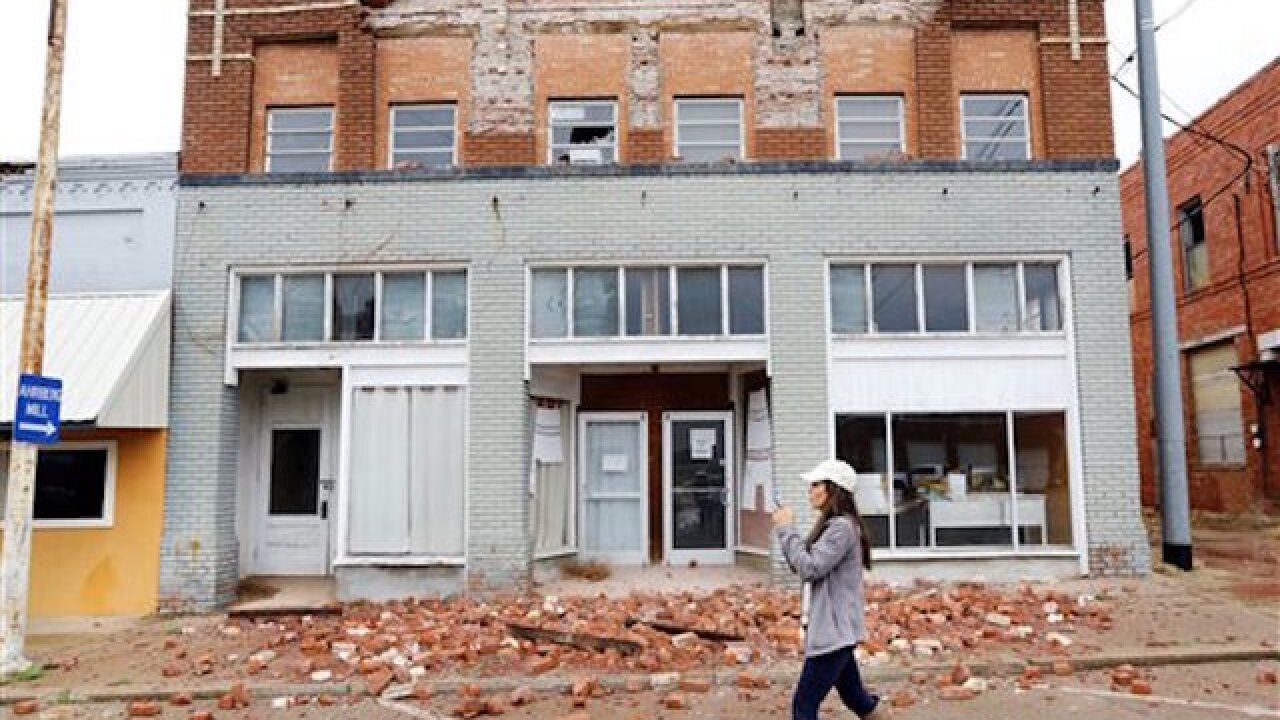 Copyright Associated Press
Jim Beckel
<p>A television reporter takes video as she walks past a damaged building in Cushing, Okla. caused by Sunday night's 5.0 magnitude earthquake, Monday, Nov. 7, 2016. Dozens of buildings sustained &quot;substantial damage&quot; after a 5.0 magnitude earthquake struck Cushing, home to one of the world's key oil hubs, but officials said Monday that no damage has been reported at the oil terminal. (Jim Beckel The Oklahoman via AP)</p>

CUSHING, Okla. (AP) — Dozens of buildings sustained "substantial damage" after a 5.0 magnitude earthquake struck an Oklahoma town that's home to one of the world's key oil hubs, but officials said Monday that no damage has been reported at the oil terminal.

Cushing City Manager Steve Spears said 40 to 50 buildings were damaged in Sunday's earthquake, which was the third in Oklahoma this year with a magnitude of 5.0 or greater. No major injuries have been reported, and Spears said the damage included cracks to buildings and fallen bricks and facades.

Oklahoma has had thousands of earthquakes in recent years, with nearly all traced to the underground injection of wastewater left over from oil and gas production. Sunday's quake was centered 1 mile west of Cushing and about 25 miles south of where a magnitude 4.3 quake forced a shutdown of several wells last week. Some longtime Cushing residents said Monday they've become accustomed to the unsettled ground beneath their feet. Others shrugged it off as a cost of doing business living next to an oil hub.

Fearing aftershocks, police cordoned off older parts of the city about 50 miles northeast of Oklahoma City to keep gawkers away late Sunday, and geologists confirmed that several small quakes have rumbled the area. Spears said an assisted living community had been evacuated after damage was reported. The Cushing Public School District canceled Monday classes.

The Oklahoma Department of Transportation reported Sunday night that no highway or bridge damage was found within a 15-mile radius of the earthquake's epicenter.

The quake struck at 7:44 p.m. Sunday and was felt as far away as Iowa, Illinois and Texas. The U.S. Geological Survey initially said Sunday's quake was of magnitude 5.3 but later lowered the reading to 5.0.

"I thought my whole trailer was going to tip over, it was shaking it so bad," said Cushing resident Cindy Roe, 50. "It was loud and all the lights went out and you could hear things falling on the ground.

"It was awful and I don't want to have another one."

In recent years, Oklahoma regulators have asked oil and gas producers to either close wastewater injection wells or cut back on the volume of fluids injected. The reductions have generally led to a drop-off in quakes and their severity, though not always.

Regulators said Monday they would shut down some disposal wells near Cushing and restrict the volume that can be used in others, but said details would be released Tuesday.

Oklahoma's strongest quake on record, a magnitude 5.8 temblor on Sept. 3, occurred in Pawnee, on the fringe of an area that had already restricted wastewater disposal. Shortly afterward, geologists speculated on whether the temblor occurred on a previously unknown fault.

"The activity has been going on for the past year and a half or so," Chang said. "This is just a spike in the activity."

Cushing's oil storage terminal is one of the world's largest. As of Oct. 28, tank farms in the countryside around Cushing held 58.5 million barrels of crude oil, according to data from the U.S. Energy Information Administration. The community bills itself as the "Pipeline Crossroads of the World."

Cushing Assistant City Manager Jeremy Frazier said two pipeline companies had reported no trouble as of late Sunday but that the community hadn't heard from all companies. Gov. Mary Fallin tweeted that no damage was reported at the storage tanks at Cushing's oil storage terminal.

Some residents tried to resume normal lives Monday, treating the earthquake as more nuisance than calamity, even though the temblor could be a predictor of more to come.

"We live in Cushing," said resident Susie Wooten, who was taking pictures of the cracked bricks outside her dry cleaning business. "You can't blame the oilfields; we're on a major fault line."

For truck driver James Mutters, having oil tank farms so close to where he lives is a fact of life.

"If you live here, obviously you know about the oilfields," he said. "I drive a truck, so I need to have gas. You can run all the stuff you want from the sun, but most of the stuff has to be run off something."

According to USGS data, there have been about two dozen earthquakes in Oklahoma in the past week. When particularly strong quakes hit, the Oklahoma Corporation Commission directs well operators to cease wastewater injections or reduce volume.

"I was at home doing some work in my office and, basically, you could feel the whole house sway some," Spears, the Cushing city manager, said Sunday night. "It's beginning to become normal."