Three fields closed, many others in horrible shape 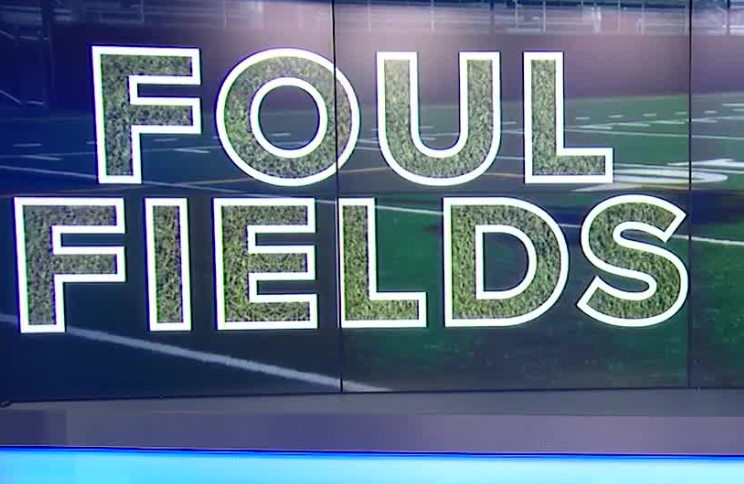 LAS VEGAS, NV (KTNV) — High school football players at several local schools are finding one of their toughest opponents isn't the one lining up against them it's the one under their feet.

From Pop Warner to the NFL, there's serious talk about concussions and brain injuries. They're re-designing helmets and re-writing the rules of the game to protect players. But what good is all that when the very field your child is playing on isn't safe?

"My concussions had gone up 300%. I think we had like 15 concussions last Fall," says Gabrielle Crawford Rancho High School's assistant principal and athletic director.

"All this stuff just started unfolding like a puzzle that's been waiting to be played," says Ms. Crawford. "And I don't think it's right it took this long."

Rancho's football field is artificial, completed in 2007 by a company called FieldTurf. But the Rams can't even use it this season.

The field has gotten so bad that it doesn't even look like a field anymore but instead a sea of black sand. You can just pick up rubber pebbles by the handful and barely see the blades of grass underneath.

Home games now require a road trip. Practice is no picnic either.

A logistical nightmare says Coach Evans. "It really is. When you're dealing with football there's so many different pieces of equipment and padding you have to take."

But they're not taking any risks at Rancho after calling the school district multiple times.

"I shut my field down," says Ms. Crawford. "I said fine. If no one wants to listen, no one's playing on that field."

She finally got a district operations manager to inspect. "He did a walk-through with us. He goes, 'Yeah. Your field is pretty bad. And so is Clark's and so is Valley's but, you know...'"

FieldTurf declined our request for an on-camera interview but told us the fields they installed in CCSD schools lasted between 12 to 15 years, several years past their 8-year warranty.

And there's another issue: Routine maintenance, or the lack thereof.

Ms. Crawford took matters into her own hands to protect her athletes. "Can we pay for this official G-Max test that every NFL team does?" she asked.

A G-Max test measures the impact when an object hits the surface. The higher the G-Max number, the more serious an injury could be.

Anything over 200 G's is considered unsafe. Rancho's field was tested in May.

That finally prompted the district to check the four other artificial fields; Clark, Valley, Arbor View and Indian Springs.

Clark looks just as bad as Rancho. The district closed Clark and Valley high school's fields at the beginning of this school year.

Arbor View and Indian Springs are in bad shape, but were deemed good enough for this season.

Rancho's field, however, might also be defective. Something Ms. Crawford learned when she happened to move into a new office.

"And I found this paper in there that said there was a class action lawsuit against the company that put our fields in."

The federal lawsuit filed in 2017 claims FieldTurf sold at least 1,450 fields to cities and schools in nearly every state, scoring $570 million in profits, much of it coming from taxpayers.

According to court documents, "the fields were inherently and materially defective."

And rather than introducing a breakthrough new product, the fields, "....were made from cheap, inferior plastics that lacked required UV protection."

"Our plastic was retaining the heat and we were getting surface temperatures of 183 degrees at 2 o'clock," says Ms. Crawford.

She's got pictures of players with burns. And not the normal abrasions that come from sliding on turf she says. "These burns were not healing," says Ms. Crawford.

"And they made us an offer to replace the entire field with the same defective material and honor one year of warranty," he explains. "Or for like $175,000 we could have paid for an upgraded surface."

A similar offer made to dozens of other customers around the country.

According to the lawsuit, the company used, "...customer complaints or warranty claims as an opportunity to up-sell...or replace one defective field with another."

Court records show FieldTurf knew about product failures as far back as 2005.

Fieldturf did install the football fields at Clark and Valley but says it used a different type of material than at Rancho.

While the lawsuit is expected to go to trial, Principal Kuzma struggles with the personal impact on his students, especially the Seniors.

"You only get one chance in high school," says Kuzma. "And our kids don't get to have that experience of all the things that center around a football field."

“The artificial turf fields utilized on several Clark County School District (CCSD) campuses have an expected life span of between 10 and 12 years, depending on climate. When tests showed it was time to replace some of the turf fields, CCSD took the step of closing the fields. Money for the Capital Improvement Program, a fund set aside for campus improvements, is being used to replace the artificial turf fields in time for the 2020-21 school year.”

“As for the lawsuits against the manufacturer of the artificial turf fields, the fields used by CCSD teams had already passed their warrantied life and the district was unable to pursue reimbursement for replacement costs.”

“The Clark County School District maintains central control of landscape watering to ensure the District is in compliance with Southern Nevada Water Authority regulations. During the summer, the fields are irrigated every evening, except Sundays. That schedule shifted to three days a week as of September 1, 2019. Given the watering restrictions, excessive heat throughout the summer can have an adverse impact on fields. Maintenance crews work to aerate and fertilize the fields throughout the year and replace sod as needed.”

We attempted to ask CCSD follow up questions such as providing documentation to back up their claim artificial turf is expected to last 10 to 12 years, which is longer than what the manufacturer says. The district told 13 Investigates we will have to file a public records request.

"The three fields installed in the Clark County School District have been in use for between 12 and 15 years - significantly beyond our standard 8-year warranty term. FieldTurf delivers high-quality products that are some of the most innovative on the market, and this performance is consistent with that commitment.

FieldTurf discontinued the sale of Duraspine in 2010 and transitioned fully to its own self-produced fibers in 2011 - and we have introduced many successful fibers since then. The Duraspine issue has not impacted safety - only how a field looks as it wears. Less than 2% of all FieldTurf fields installed worldwide have been replaced under warranty because of issues with the Duraspine fiber.

Further, the Courts have not yet certified any class action against FieldTurf around the Duraspine issue, and they have not yet even decided whether most of the claims are valid. Additionally, the New Jersey Attorney General's office and the Federal Trade Commission (FTC) have both closed investigations into FieldTurf without finding any wrongdoing."