A new ranking finds Boulder City is the safest city in Nevada while Reno is at the bottom of the list.

Las Vegas is only a spot above Reno in the National Council for Home Safety and Security list for 2018.

The rest of the list includes Mesquite at No. 2 for safest cities, followed by Henderson, Sparks, Elko and North Las Vegas. The ranking only includes cities with populations above 10,000.

To identify the safest cities, the National Council for Home Safety and Security reviewed the most recent FBI Uniform Crime Report statistics along with population data and internal research.

The cities were ranked based on the number of reported violent crimes -- aggravated assault, murder, rape, and robbery -- and property crimes -- burglary, arson, larceny-theft, and motor vehicle theft -- per 1,000 people. These variables were then weighted, with violent crimes assigned a value 1.5 times (due to their severity) that of property crimes.

According to the National Council for Home Safety and Security, Nevada's average violent crime is 7.43 per 1,000 residents with the average property crime 27.1 per 1,000 residents. The council indicates that the Silver State has one of the higher crime rates nationally but still has safe communities.

The ranking notes that despite Henderson being significantly larger than Boulder City and Mesquite, the city has relatively low crime.

By comparison, with Henderson's population of 291,584, there were 617 violent crimes and 5,484 property crimes. Despite the number of crimes, Henderson is well below Nevada's average crime rate for both violent and property-related offenses and is also below the national average. 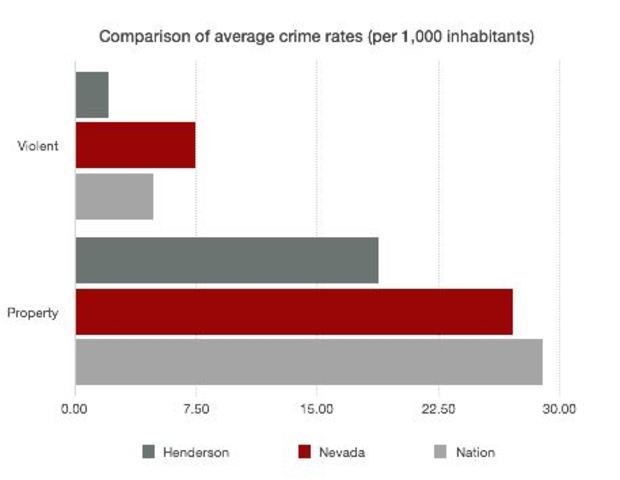 To look at more data from the National Council for Home Safety and Security ranking, click here.