Most wanted in Las Vegas area for week of April 30

After making his purchase, he walked away from the counter and headed toward a booth. Two males sitting at a table near the counter started an argument with him.

Las Vegas police and Henderson police are asking for help in locating the following suspects. Anyone with information is asked to contact the police are Crime Stoppers at 702-385-5555.

Earlier in April, a suspect robbed a convenience store employee using a weapon on West Cheyenne in Las Vegas. The employee was not injured during the robbery. Police say the suspect is a black or Samoan male (or mixed race), about 25-35 years old, 5 feet 8 inches - 6 feet tall, around 200 pounds, and possibly with hair in a ponytail or bun.

Around 10 p.m. March 26, Las Vegas police responded to a fast food restaurant located in the 1000 block of East Flamingo Road, near Cambridge Street, to investigate reports of a strong-arm robbery. The investigation indicated while the victim was in line to order and pay for food, he removed money from his pocket. After making his purchase, he walked away from the counter and headed toward a booth. Two males sitting at a table near the counter started an argument with him. During the argument, a Hispanic man pushed the victim to the floor. At that point, a black man wearing a black Nike hat and gray and denim hooded jacket got on top of the victim and removed the money from his pocket. After committing the robbery, both suspects exited the restaurant via the east doors. 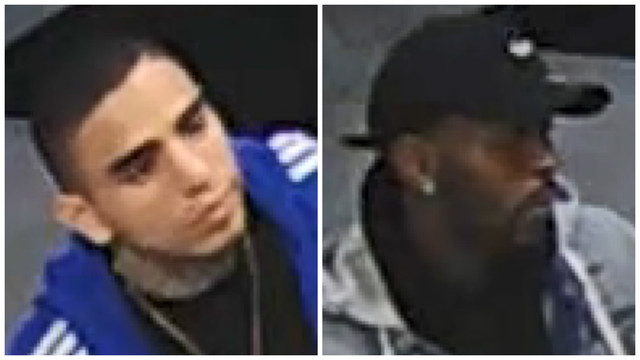