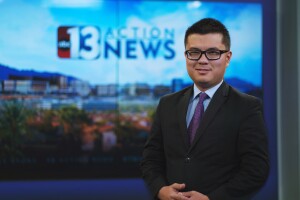 Jeremy Chen has been a reporter at KTNV Channel 13 Action News since September 2019.

He comes over to Las Vegas after working three years at KESQ-TV in Palm Springs, California as a morning reporter and fill-in anchor, where he covered various national stories including the Turpins Torture case, the Pinyon Pines Triple Murder Trial and the Palm Springs mayor corruption scandal.

Before going to the desert, Jeremy worked for over a year as a multimedia journalist and fill-in anchor for KAEF-TV, the ABC affiliate in Eureka, CA. While in the North Coast of California, he had the opportunity to report on a variety of stories ranging from medical cannabis to economic development to homelessness.

Jeremy graduated cum laude from the Annenberg School for Journalism at the University of Southern California with a BA in Broadcast Journalism and a minor in Chinese. There, spent over 4 years working at USC's student-run news station, Annenberg TV News. He has been an assignment editor, a video journalist, and a reporter/anchor for the station. Jeremy has also interned at KCBS2/KCAL9 in Los Angeles where he wrote anchor scripts and packages as well as writing web feature stories. He also had opportunities to shadow KABC reporters and photographers in the Inland Empire where he was able to observe them and understand concepts that went beyond what he learned at USC.

When Jeremy isn't out reporting, he can be found golfing, hiking or trying out whatever buffet Las Vegas has to offer. If he's indoors, he prefers either experimenting with new recipes, watching USC football during the fall, or coming up with new beats on drums. Don't be afraid to say hi.

Fun fact: Jeremy was a 5-year member of the USC Trojan Marching Band where he played cymbals and snare drum. He had an opportunity to perform and appear on the Tonight Show with Jay Leno, The Voice, as well as the Playboy Jazz Festival. He won't hesitate to play Fleetwood Mac's "Tusk" when the situation warrants.

He is a rabid USC Trojans, Lakers, and Dodgers fan.