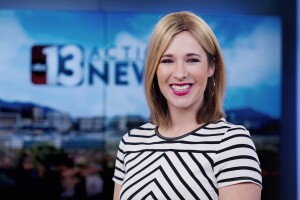 Jackie Kostek is weekend anchor and community sports reporter for KTNV. She came to KTNV from WCIU in Chicago, where she spent three and a half years working as a features reporter and producer. She also served as the in-arena and digital host for the Chicago Blackhawks. Before that, she reported for an award-winning digital news website, DNAinfo Chicago (now Block Club Chicago).
While in Chicago, Jackie covered everything from the city's persistent gun violence and the high-profile police-involved shootings of Laquon McDonald and Quintonio LeGrier to the Blackhawks and Cubs making their Stanley Cup and World Series runs. She also had a lot of fun on live TV - log rolling, roller coaster riding, eating, drinking, dancing, skating and getting to know all of the city's amazing characters. She is an adventurer at heart and is always up for anything.

Jackie has a Master's in Journalism from Columbia University in New York and a Bachelor's in Journalism and American Studies from the University of Kansas. She is also a Teach for America alum -spending two years as a Head Start and Kindergarten teacher in a Title 1 school just outside Washington, DC.