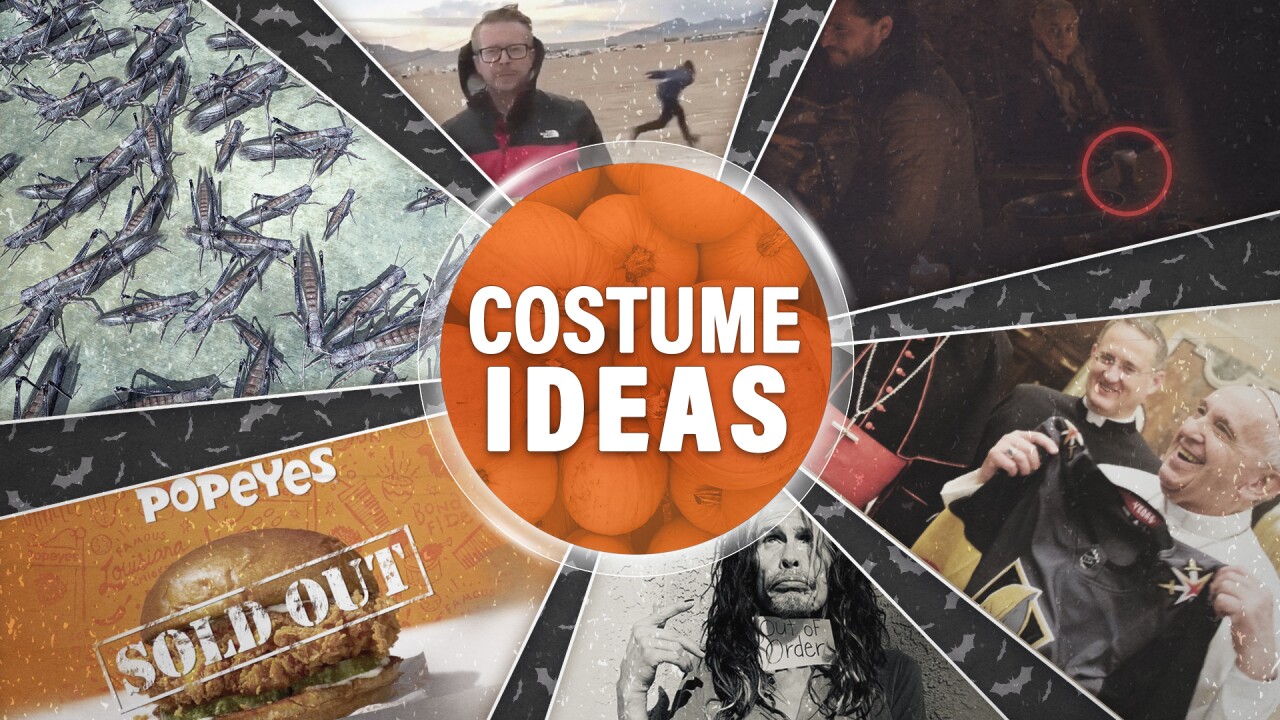 Still in need of a Halloween costume idea?

Whether you want to throw something together for a last minute party or you're looking for something unique to wear while trick-or-treating, we got you covered! It was an interesting year for trending news stories, here are a few costume ideas inspired by ones that had everyone talking.

Of course we had to include this. Who could forget when 13 Action News Investigative Reporter Joe Bartels was photobombed by a Naruto runner while covering Storm Area 51? Perhaps the easiest way to pull this off is to dress like Joe and safety pin/fasten a little plush Naruto on your shoulder, which go for around $16 on Amazon and at stores like Target and Hot Topic. Or get a friend to be Naruto and run behind you periodically throughout the night? You can also pick up a reporter microphone prop for a little extra news flair. Bonus points for changing the logo on the mic flag to KTNV.

What do you need:

In August, chicken sandwich shortages were reported at Popeyes across the Las Vegas valley as people rushed to the fast food chain to try what was dubbed by many as the chicken sandwich "better than Chick-fil-A."

Check out the line when 13 Action News Anchor Ross DiMattei got his hands on one for the first time:

Well now, as VICE reports, the chicken sandwich is an actual Halloween costume.

There's a clear winner. But get it before it's gone. #chickensandwichwar #Spicy #sexyfood #halloween The Sold Out Chicken Sandwich is back! https://t.co/ereoOP77Gj pic.twitter.com/ErF6BxnJ9E

'OUT OF ORDER' STEVEN TYLER

Last month, Aerosmith's residency show "Deuces Are Wild" was canceled for a night while Steven Tyler recovered from laryngitis. Although it was unfortunate for fans who were planning on seeing the band at Park Theater that night, Tyler announced the cancellation in a pretty funny way. The lead singer tweeted a photo of himself with an "out of order" sign over his throat.

I LOST MY VOICE… BUT I CAN’T TALK ABOUT IT.
REFUNDS FOR THURSDAY 26TH OF SEPTEMBER'S CANCELED PERFORMANCE WILL BE ISSUED AT POINT OF PURCHASE.@Aerosmith #DEUCESAREWILD pic.twitter.com/XlCnfqYks1

STARBUCKS CUP ON GAME OF THRONES

Game of Thrones is a show of action, suspense and plot twists -- leaving many viewers surprised at the end of each episode. But perhaps one of the most unforeseen moments of the series finale this year was when a Starbucks cup was spotted on a table in the great hall of Winterfell.

This one is probably best as a group or couple costume. Get a few of your best buds to be your favorite GOT characters and you're all set!

Over the summer, Las Vegas made national headlines when the valley was invaded by grasshoppers. They are all gone now but at one point there were so many of the little guys that experts said the bugs were showing up as fake rain on the Doppler radar. It confused our own 13 Action News Meteorologist Dani Beckstrom!

If you decide to be a Las Vegas grasshopper this year, just be careful hanging out downtown. You don't want to end up on an Evel Pie grasshopper pizza.

In May, the Vegas Golden Knights presented a custom jersey to Pope Francis at the Vatican. Why not recreate the historic moment by dressing as the Pope wearing a VGK jersey for Halloween?

Did you dress up as one of these? Whether you did or you came up with your own idea, we want to see your Halloween costume! Send Halloween photos to us at photos@ktnv.com and we may use them online and/or on air. #13Halloween