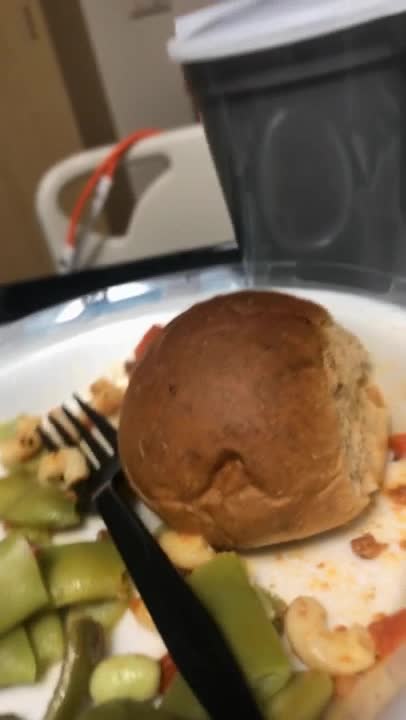 LAS VEGAS (KTNV) — The hospital is one of the last places any of us wants to be right now, but for some it's unavoidable.

A man found himself at Sunrise Hospital last week after a car accident but checked out a day early because he felt unsafe and it had nothing to do with coronavirus.

On March 11, Mario Villanueva was stopped on the Sahara off ramp of the I-15 freeway when he was slammed from behind by another driver.

"He had his phone in his hand, or you know, he was distracted and didn't see that traffic was at a complete stop so he just came behind me, rear-ended me and tossed me enough to t-bone me again," Villanueva recalls.

The collision caused swelling in Mario's spine that left him hospitalized for several days. But he left before he was supposed to.

"When the food happened was when I decided to (go) even though I wasn't okay to leave (for) home."

Hospital food has long been the butt of jokes, but this is no laughing matter.

He didn’t realize it until after he’d already eaten some of his dinner. He took cell phone video and says it proves his point!

"They came in and they joked around about it, which I didn't think was a joking matter," says Mario.

"They joked about the fact that they served you hospital food with bugs crawling on it?" Darcy Spears asked

"Yes, they did. They said that I could be a contestant for Fear Factor. I didn't think it was funny at all."

"It wasn't until I showed them the video that they said, 'Oh, there's a video?' I said 'Yes, I have a video because I knew for a fact you weren't going to take a picture.' And that's when they made the report."

He says hospital staff apologized and said they were embarrassed about the situation but offered no assurance that they’d inspect or deep clean the kitchen to root out the source of the bugs.

"I was upset! I really was. I was more than upset! You don't know what a bug contains. It could be carrying a disease for all I know."

When 13 investigates asked Sunrise Hospital for comment, they sent this statement:

“The health and safety of our patients and families is always our top priority at Sunrise Hospital & Medical Center. If a patient brings to our attention a quality issue or concern, we are diligent in our efforts to address and seek resolution with them. Due to federal HIPAA guidelines, we cannot discuss patients or protected health information.”

"They're not violating any HIPAA law because they're not speaking about my health or anything," said Mario in reaction to the statement. "They were supposed to speak about what was going on in the kitchen. And I don't believe there are patients in the kitchen."

13 Investigates told Sunrise Hospital the same thing--that we didn't see how HIPAA applied to bugs in a hospital cafeteria. And even after Mario agreed to waive his HIPAA privacy protections, Sunrise still declined to comment further.

The state Department of Health's Bureau of Health Care Quality and Compliance is now investigating.