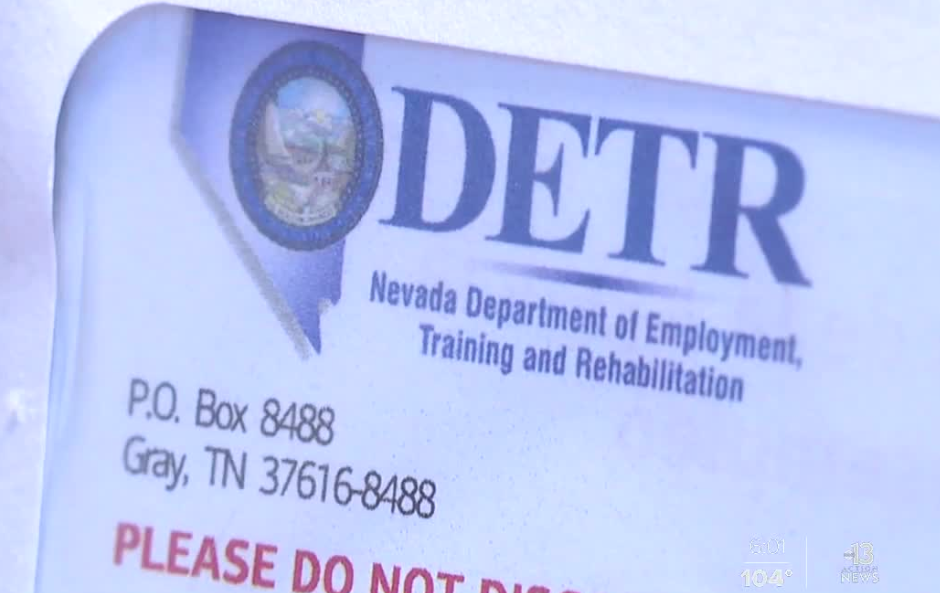 A new twist in unemployment frustration. Instead of getting no unemployment benefits like so many, one local woman got three payments in her mailbox… all with different names on them. 13 Chief Investigator Darcy Spears exposes DETR's triple pay. 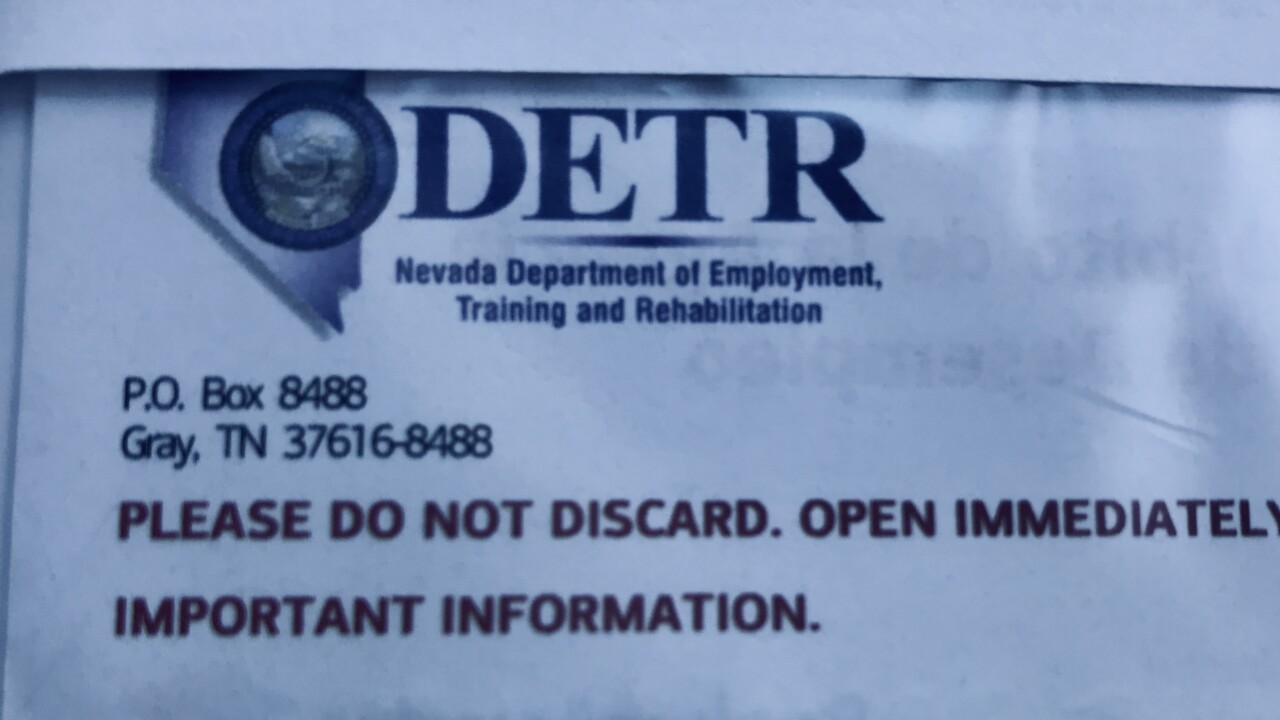 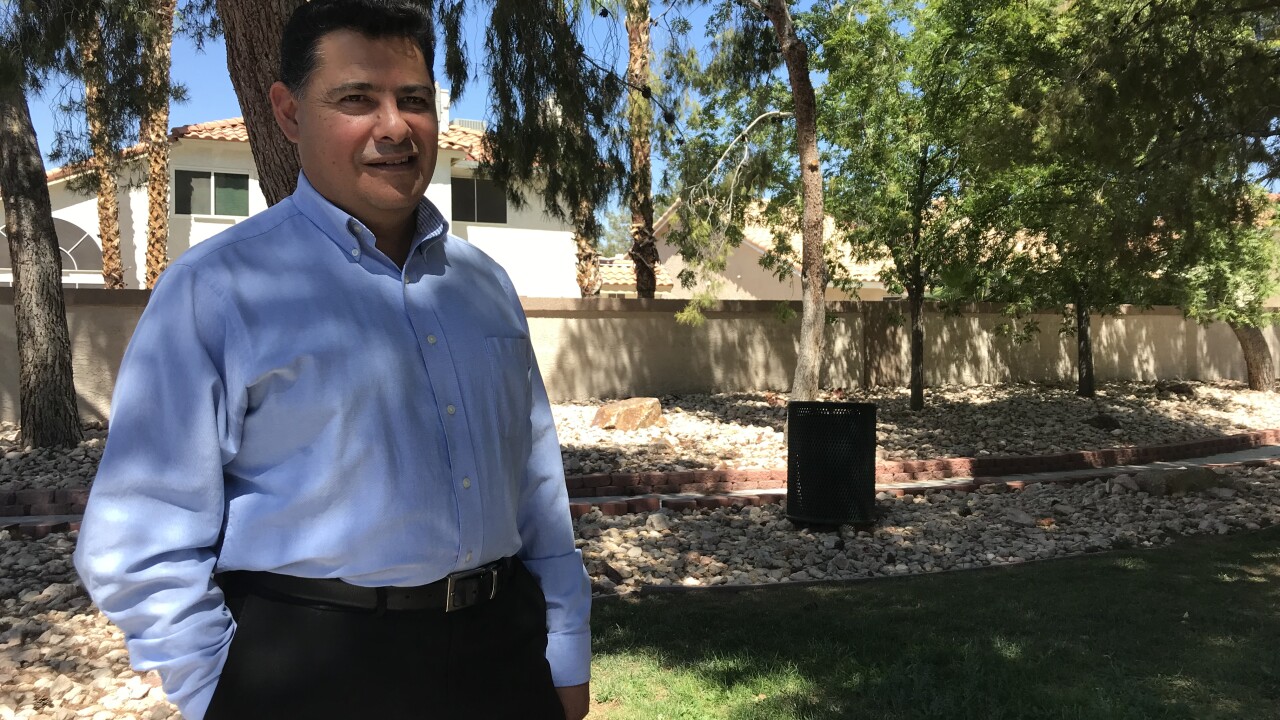 LAS VEGAS (KTNV) — Imagine waiting months to receive your unemployment benefits and then they finally come.

Then imagine going to your mailbox one day and getting an unexpected letter from DETR. And two more several days later.

“It's very possible that errors can happen,” said Feher.

Feher is a former adjudicator who worked for 10 years at the state Department of Employment, Training and Rehabilitation or DETR.

She was recently helping that friend who was having trouble with her unemployment claim.

“Because it's so confusing and they really couldn't navigate it.”

Laura saw that DETR made errors that were holding up her friend's benefits and helped to get them resolved.

She’d been receiving benefits since June, which made the appearance of those three random letters even stranger.

“Totally different people, different names that she had never heard of. She's lived at this address for over 18 years so, it's very suspicious,” said Feher.

The three letters with debit cards inside were sent to a home in a gated community in the southwest valley.

If it's fraud, the fraudster isn't getting the money, making Laura think it's more likely a major DETR mistake.

“If it is fraud, I just don't understand how three different people with completely different names would be at her address,” Feher said. “It doesn't add up.”

DETR wouldn't answer our questions, sending a statement saying, "While we understand and acknowledge claimants' frustration and the need they may feel to share their information with the media in order to have their specific issues addressed, we cannot provide comments regarding inquiries related to particular claimant scenarios."

So, all we can do is ask former insiders like Laura how something like this can happen.

She says she saw a lot of errors during her time at DETR.

“Especially when you're dealing with two monitor screens and sometimes you can have four claims, which can easily make an error.”

You may be wondering why Laura is speaking on her friend's behalf.

It's the same reason the friend didn't report the letters as possible fraud.

“She was afraid that if she reported it -- because she thought it might be fraud -- that they might come after her. If Unemployment wants to go after someone, it's very possible that they can.”

Laura is speaking from personal experience.

“Two days after I wrote a letter in the Nevada News regarding the unemployment system and how convoluted it was and the errors and everything, my PUA claim was stopped.”

Benefits she'd been receiving after the travel agency where she now works as an independent contractor closed due to COVID.

“I got sent a letter saying I might be eligible for regular unemployment, which they already denied me. So, I am now in no status. I cannot file on either claim. I cannot get through to anyone and I am basically without any benefits at this point.”

“You believe it's more than coincidental timing?” Darcy Spears asked.

“Oh, absolutely positively!” said Feher. “I think that they retaliated.”

PUA claimant Patrick Lucero believes this is no conspiracy theory.

He thinks retaliation and wrongdoing are alive and well at DETR.

While DETR is sending three debit cards to random people at the wrong address, people like Patrick can't even get the one they're told they qualify for.

“It's no rest. No sleep. It's despair. It's uneasiness about every day. You're trying to find some kind of hope every day. And to fight… sometimes it gets difficult. Sometimes you just don't want to get out of bed.”

It covers people like Patrick, described as one of more than 45,000 claimants caught in what the court calls the PUA/UI whirlpool of people who aren't getting anything, because, the lawsuit says "DETR could not decide which of two programs to pay under."

Many have endured five months or more without a paycheck.

“To delay any further, you're going to cause families to lose their homes,” Patrick believes.

His concerns are even echoed by an Alorica call center staffer.

On Aug. 5, Patrick hit the lottery -- meaning he was lucky enough to get through to a representative on the phone -- who reviewed his claim and made a note that says, "Claimant is a gig worker, a salesman on the Strip, and is not eligible for UI. This needs to be resolved immediately. This issue has triggered Active Issues under payment summary. ACTIVE ISSUES MUST BE REMOVED SEPARATELY so that payment can process. Again, please remove these Active Issues so that benefit can be received ASAP."

But instead of doing what the note directs, DETR denied Patrick's PUA claim just days after they were instructed to pay it.

“I know that they're trying to find a way to deny claims… just not make payment.”

As a combat veteran who served in the Army, Patrick says nothing compares to this battle.

“Send me to Afghanistan or Bosnia. I'd rather take bullets than to take crap from these folks.”