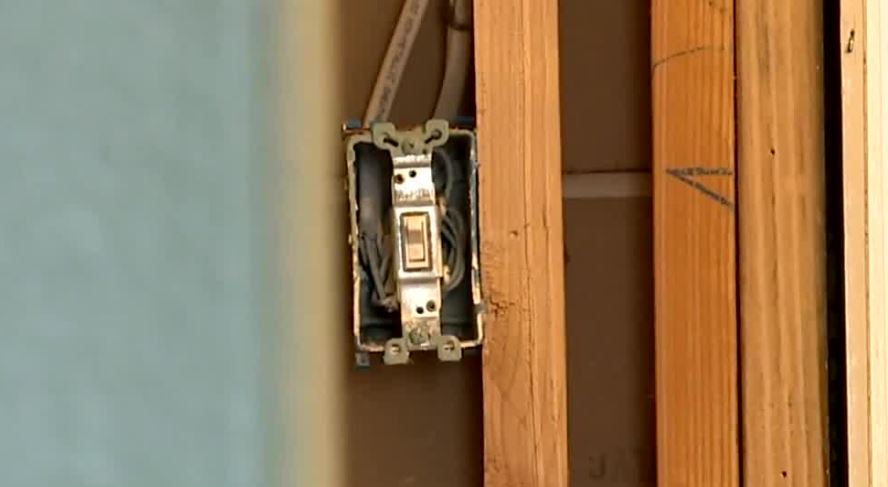 From a leaky faucet to possible foreclosure? Believe it or not, it's possible. Darcy Spears reports. 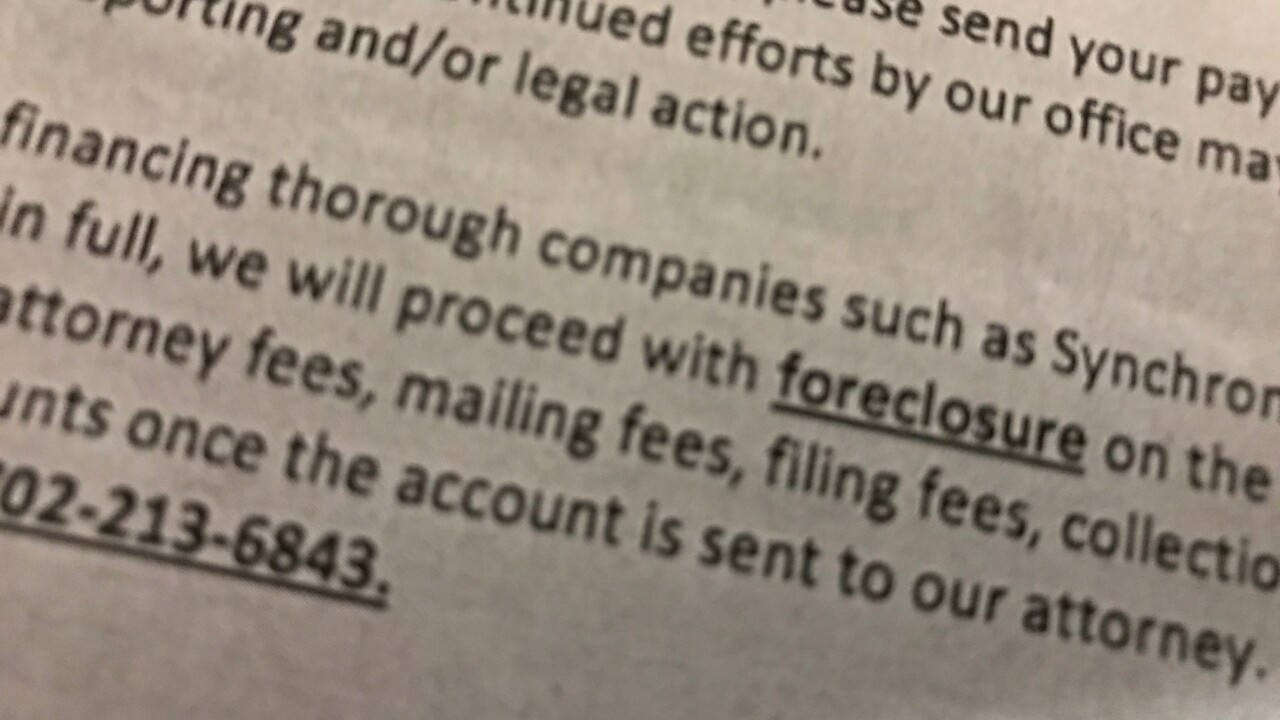 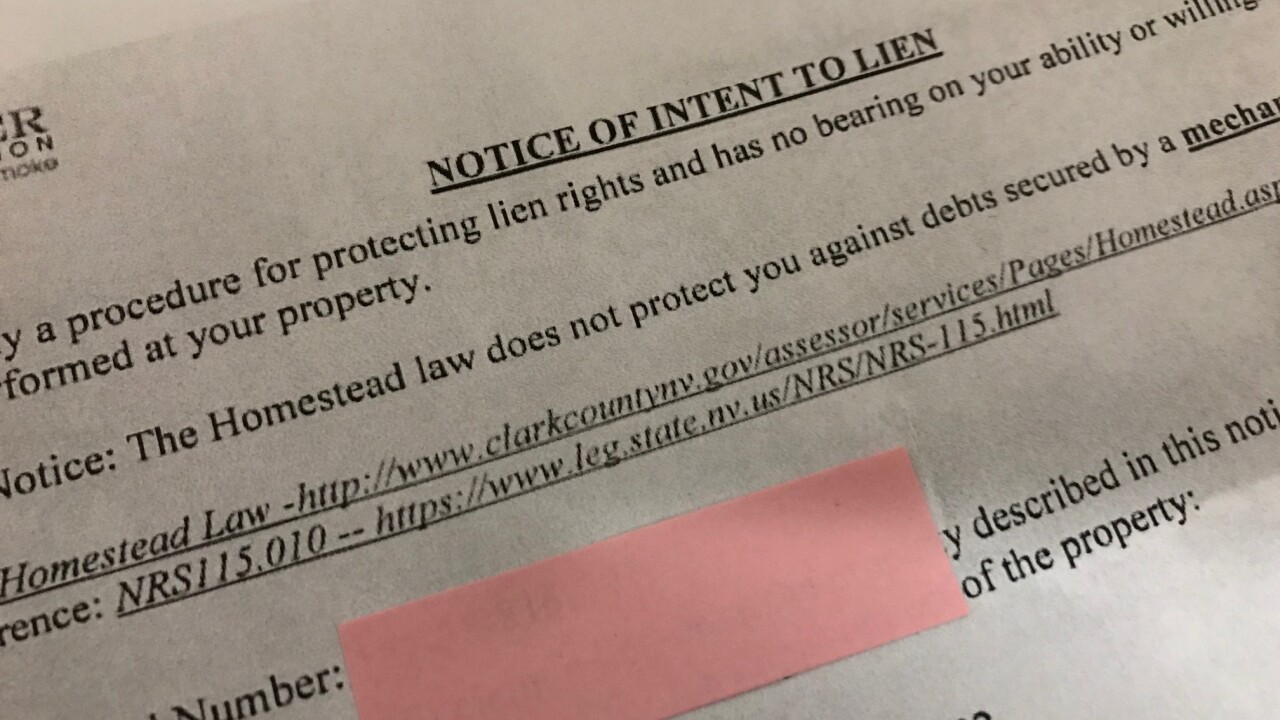 LAS VEGAS (KTNV) — From a leaky faucet to possible foreclosure? Believe it or not, it's possible.

Many homeowners say they're facing nightmare scenarios like that. It started after a company they hired to make repairs filed what they claim are misleading liens against their homes.

"You just had a leak. Called the wrong person," says Angela DiLoreto. "And suddenly he's threatening to take your home over a bill that was out of control."

Angela's saga started in late October when she called Rooter-Man plumbing to her Seven Hills home for a bathroom leak.

"About right down here," Angela points out to 13 Investigates, "probably about a softball size, was just a little bit of bubbling on the drywall."

"He said you have a leak. And the same owner owns a restoration company. Would you like to use them?"

Fearing a mold problem, Angela saw that as a quick solution so she agreed to bring in Bolmer Restoration, which is owned by Eduardo Arredondo.

"That was our mistake," says Angela. "Big mistake."

Right away, she felt things didn't measure up.

"It was oddly quiet for doing demolition."

More red flags were raised when a boss from Bolmer showed up at her house she claims was, "smelling like marijuana and says, 'I need you to write me a check for $5,000'. And I was like, 'what are you talking about?'"

Angela explains, "Up until this point I've been told, 'you won't have any out-of-pocket except for your insurance deductible.'"

With her bathroom torn up and hoping to cut ties with Bolmer, Angela requested a final invoice to submit to her insurance company.

Until early December. "And my husband calls and says, 'We just got a certified letter with an Intent to Lien'" Angela explains.

Two invoices were attached. "Add it up to $14,700 dollars," Angela says. "Where did these figures come from?"

Angela's case is not isolated. On the Clark County Recorder's website, 13 Investigates found Bolmer Restoration has filed hundreds of liens against Las Vegas homeowners since 2014.

When Angela finally got an itemized bill she filed a complaint with the Nevada Contractors Board and Attorney General's office alleging fraudulent charges, like for HEPA vacuuming.

She also says she confronted Arredondo for items that weren't used.

"You're charging me for all this safety gear on all your guys that I never saw them wear," says Angela.

The bill also claimed there had been work done in the master bedroom.

"And my master bedroom was outside the containment area and never touched," says Angela.

She didn't dispute she owed some money, but only wanted to pay for work that was actually done.

"I know that there were outrageous -- we'll call them 'errors' on my invoice," Angela explains. "And I tried to discuss those errors and couldn't get anybody to discuss those with me. So that makes me wonder if it's something more sinister."

A former Bolmer employee says there is something more sinister.

"At first I just thought he was charging more than everybody else in the valley," he says.

He agreed to talk to us if we protected his identity because he doesn't want to be implicated in how Bolmer did business and has concerns about what homeowners were put through.

"They didn't do anything wrong to get a lien on their house," he explains. "But we're still going to go after their house if there's money there."

"After meeting with the customers face to face on all of these occasions, I saw the impact of what we were doing."

Thursday at 11 p.m., we'll expose how he says the alleged fraud was committed and why an attorney says the company's contracts may be bogus too.

It's all currently under investigation by the State Board of Contractors.

As for Mr. Arredondo, he wouldn't talk to us on camera, providing this statement instead:

For more than 10 years, our company has had the privilege of providing quality work for thousands of Nevadans. We strive to treat each customer with the utmost integrity and respect and are prepared to listen to and address these customer concerns.