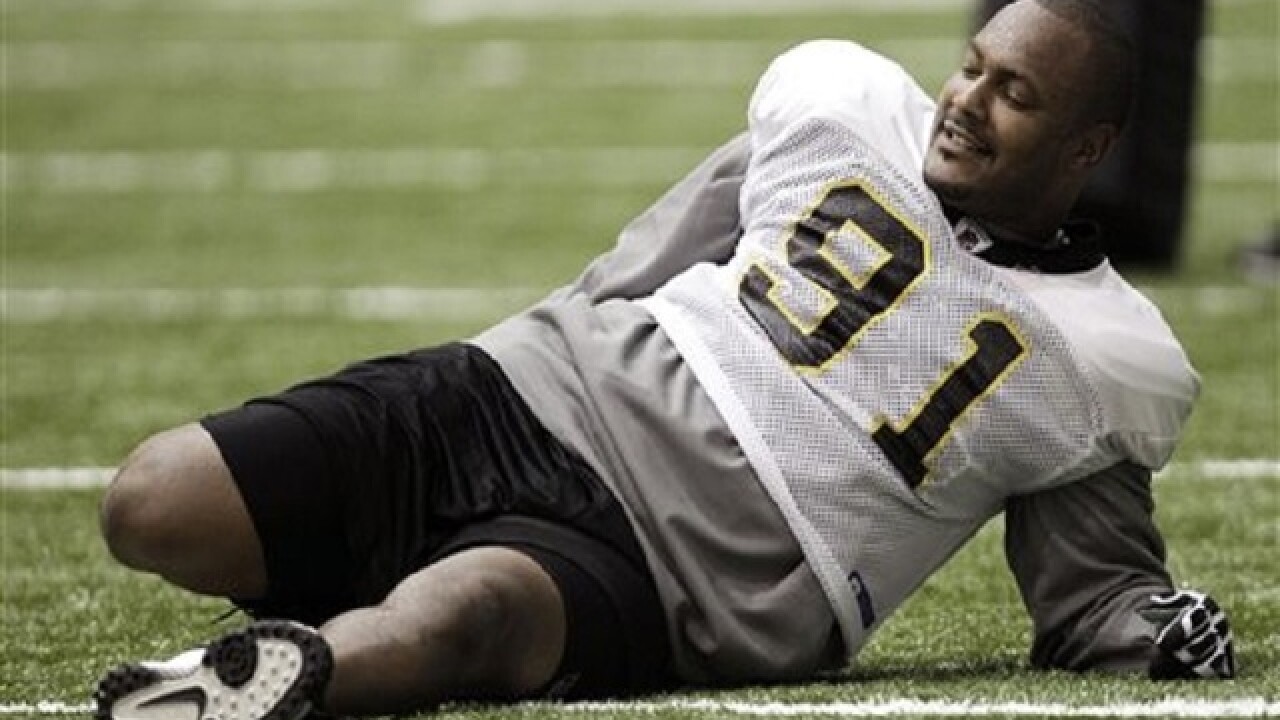 NEW ORLEANS (AP) — Former New Orleans Saints star Will Smith had a loaded gun inside his vehicle on the night he was shot, but there was no evidence that it had been fired, police said Tuesday.

In a statement, police shed new light on the shocking death of the New Orleans football legend who was shot and killed Saturday night. Police have said that Smith and his wife were shot by Cardell Hayes after Hayes bumped Smith's vehicle from behind.

Police also said Tuesday that they found a loaded revolver inside Hayes' vehicle. But authorities said there was no evidence to suggest either weapon was fired during the Saturday shooting and said that Smith's gun was fully loaded when found during a search of the vehicles Tuesday morning.

"During the argument, Hayes produced a .45 caliber handgun and opened fire, striking Smith and his wife. No one else was injured in the gunfire," police said in the statement. Smith's wife was shot in the leg but survived and was taken to the hospital.

Police have earlier said they confiscated a weapon at the scene believed to have been used to shoot Smith, but until Tuesday have not commented on whether Smith had his own weapon or whether any other weapons were found.

Police also said Tuesday that two passengers were riding in Smith's vehicle at the time of the shooting. They were not identified, and police said neither was wounded.

News of the weapons is the latest twist in a case that has riveted a city where Smith was a fan favorite.

Earlier, surveillance video from businesses in New Orleans' Lower Garden District shows what may have precipitated the shooting death of former defensive end Smith: Moments earlier, what appears to be his Mercedes SUV can be seen bumping the rear of a Hummer that stopped on a busy street.

The Hummer then pulls over, but rather than stop to inspect for any damage, the Mercedes pulls around it and drives away. Video captured moments later by a camera at a neighborhood bar near the shooting scene shows what appears to be the Mercedes driving by, followed closely by the Hummer.

The lawyer for the Hummer-driving Hayes has said his client was the victim of a hit-and-run just before the shooting.

It was after that earlier reported hit and run that police say Hayes hit Smith's Mercedes from behind hard enough to push it into another car carrying Smith's acquaintances.

Smith and Hayes — who himself played defense in a semi-pro football league — then confronted each other. Witnesses heard a few angry words, quickly followed by gunfire. Smith died with his door open, slumped over the driver's seat. His wife, Racquel, was wounded in the leg.

The surveillance video from Magazine Street, where the Smiths had eaten dinner at a Japanese restaurant earlier Saturday night — throws another twist into the beloved athlete's shocking death.

Defense attorney John Fuller has said Hayes called 911 while following the vehicle that hit him, and was trying to read the license plate number moments before their confrontation.

Hayes, 28, is being held on $1 million bond after police arrested him on a charge of second-degree murder. Police plan to add a charge accusing Hayes of shooting Smith's wife, spokesman Tyler Gamble said.

Gamble would not comment Tuesday, saying: "We continue to canvass the area to obtain and review video surveillance."

Gamble has said the investigation prevents him from saying whether Hayes called 911 to report a hit-and-run accident.

Fuller said Tuesday that an April 28 hearing has been set for his client, during which prosecutors will have to describe the evidence against Hayes.

Meanwhile, the Saints and Smith's family announced that a public visitation will be held Friday. Visitors will be able to walk by Smith's casket at the Saints' suburban indoor practice facility.

Fuller insisted outside court Monday that Hayes will be vindicated once the full story emerges. Someone "besides my client" was behaving in a threatening manner, he said, though he wouldn't say who. "My client has been pilloried, convicted and tried" in the news and on social media, he added.

Questions remain about what exactly happened that night. Police haven't released the accounts of Racquel Smith, the passengers in the other cars, nor any other witnesses.

The news was hard on Smith's many fans. The native of Queens, New York, came to New Orleans from Ohio State where he was on the 2002 national championship team, and quickly became a team leader. After retirement, he chose to stay in his adopted community, showing his commitment to the city as it recovered from Hurricane Katrina and supporting a foundation that helped women and children.(backslash)

Smith created his share of football highlights, particularly in the 2009 run to the Super Bowl, when he had 13 regular-season sacks — fifth best in the NFL that year. His postseason play included an interception of a Kurt Warner pass in a Saints playoff victory over the Arizona Cardinals.

Funeral arrangements have not yet been made public.