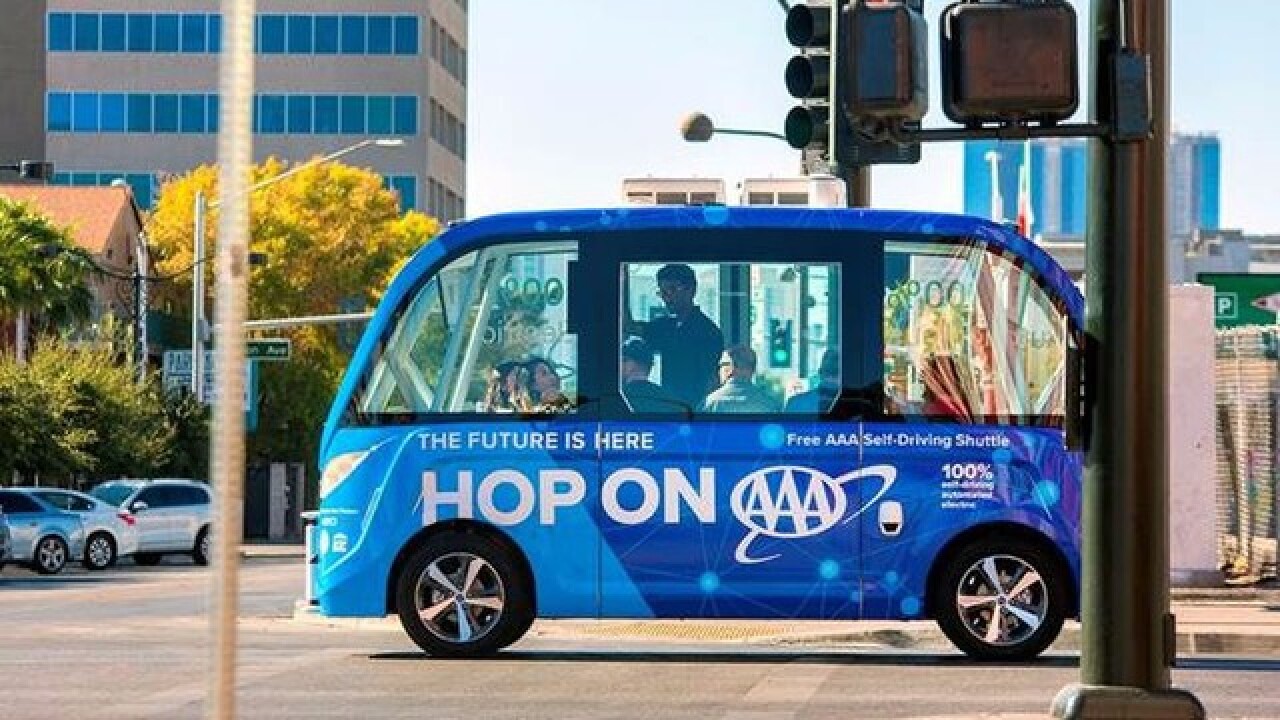 UPDATE NOV. 10: The National Transportation Safety Board, or NTSB, is sending a team of 4 to Las Vegas to investigate the crash involving the self-driving shuttle bus. Normally, they investigate high-profile airplane and train crashes.

One of the things city officials said earlier this week, that still needs to be investigated, is that the shuttle does have a horn on board, but it was not used during the crash.

UPDATE NOV. 8: The driverless shuttle was involved in a minor crash the first day of operation in Downtown Las Vegas.

A delivery truck backing into an alleyway clipped the front of the shuttle, which had sensed the truck and stopped.

It was directly in the truck's path, however, and the driver didn't see it.

Eight passengers on board were uninjured.

Maurice Bell, a vice president with Keolis, says the fender bender happened because of human error. He said the shuttle did what it was supposed to do.

Bell says the company will be looking into why the horn didn't sound and possibly make changes.

Keolis, the company that helped build the shuttle, says that the crash was a minor accident and that damage to both vehicles was cosmetic. The driver of the other vehicle was cited for the crash.

The City of Las Vegas released a statement regarding the crash:

The autonomous shuttle was testing today when it was grazed by a delivery truck downtown. The shuttle did what it was supposed to do, in that it’s sensors registered the truck and the shuttle stopped to avoid the accident.

Unfortunately, the delivery truck did not stop and grazed the front fender of the shuttle. Had the truck had the same sensing equipment that the shuttle has the accident would have been avoided. Testing of the shuttle will continue during the 12-month pilot in the downtown Innovation District.

UPDATE NOV. 7: The driverless shuttle is hitting the streets on Wednesday, Nov. 8, in Downtown Las Vegas. It will be the first one in operation. There is a human attendant in case of an emergency.

Las Vegas is yet again paving the path of technology.

Downtown is the poster child for the change, where a self-driving shuttle was unveiled Tuesday.

Fremont East wins the honor of being the first public road in the country a vehicle like that has ever been on.

"It's an experience that I never dreamt I would see in my lifetime and I have been very nervous because I am a control freak," Mayor Carolyn Goodman said.

The shuttle will give free test rides to the public for the next week. It can hold 12 people and runs on electricity.

Developers addressed safety concerns by explaining the series of cameras and radars that "see" everything going on around the vehicle. It stops short if anything crosses its path.

Even with the sensory technology, the shuttles aren't ready to drive on city streets. They can't read stoplights, for instance.

But Goodman has a vision for how these shuttles could one day change the way we get around our city.

"You can space the vehicles far enough apart and get them on a route that would come every 10 minutes, 20 minutes, whatever because you've got total control through the autonomous technology," Goodman said. "We have a preliminary map in mind to move people in and around the heart of the city as a test run."

Goodman says leasing a shuttle would cost the city about $10,000 a month. The mayor hopes Las Vegas eventually buys its own vehicles and moves the manufacturing here.